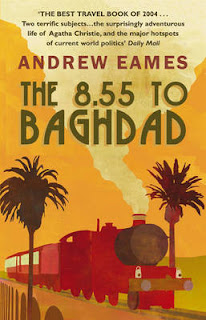 In one of those serendipitous events that seem to be a frequent occurrence in the lives of many writers, Andrew Eames was staying in Baron’s Hotel in Aleppo, where he was introduced to the mother of the owner who was persuaded to retell the story of how Agatha Christie and her second husband, Max Mallowan had come to dinner with her and her husband.
As Eames later found out, in the aftermath of the breakdown of her first marriage and her infamous eleven day “disappearance”, Christie had, on a whim, decided to take the train to for a holiday.  Outlandish as this may seem today, in 1928, when she took her trip, this was a perfectly “doable” exercise, which took eight days, using two luxury trains.  It was on this trip that she first met Max Mallowan, a young archaeologist and, having married him in 1930, she would spend her summers for the next 30 years assisting him on his digs in and .
The route of Christie’s original trip took her through a veritable gazetteer of modern trouble spots: the Balkans, Syria and Iraq and, spotting a good “hook”, Eames decided to recreate her journey in early 2005, before the Iraq war but at a point where it looked inevitable.
The resulting book, 8.55 to Baghdad, traces this journey and interweaves his impressions of these countries today with his quest to find traces of Christie’s journey in the places he visits, starting in Sunningdale, the scene of the last years of Christie’s unhappy first marriage, where Eames catches the titular 8.55 train, which actually takes him to Victoria to catch the Orient Express.
Eames’ concept is quite a tricky one as he is trying to fit two very distinct stories into one book: the personal history of a middle class novelist in the 1920s and the story of the impact of conflict in the 20th and 21st Centuries.  Although, for me, he doesn’t quite manage to carry the whole thing off, it is, nevertheless, an enjoyable piece of travel writing.
There are some vivid passages in the book and, given the material to work with, Eames is capable of telling a good story, in particular, his journey through Iraq with a spectacularly mismatched bunch of tourists, all clearly members of that weird sub-species of travellers who are drawn like lemmings to grim places for their holidays.
He is also very good at illustrating, through the accounts of his personal encounters, the general humanity and kindness of people who can often be perceived as nameless and faceless representatives of countries with whom we are in conflict.  Eames reminds us that, regardless of where we are from, most of us are reasonably decent people, just trying to make a life for ourselves and our families.
Although Eames professes to be a Christie fan and to be interested in following her steps, 8.55 to Baghdad doesn’t really show this and the Christie bits seem to be a little half-hearted and even suggest a lack of familiarity with her and her books.  Indeed, he confesses at the beginning to not even knowing who Max Mallowan was.  The book feels like Christie was just a tool to link his travels together.
I also found that his historical interludes, whilst interesting, were a bit shallow and came across as if he’d done a little bit of basic research to fill out his personal stories, rather than showing any detailed knowledge.  It’ a bit of a quibble but it detracted from the book for me.
Overall, though, despite these issues, I enjoyed the book, although I suspect that it won’t stick long in the mind.  It was, however, sufficiently interesting and informative that I will be checking out his other travel book, Blue River, Black Sea.
Posted by Falaise at 11:25 AM

Agatha Christie has always been a comfort read for me - I knew of her disappearance but did not know this connection. I think I will try to find this book.

I had not idea that it was known where Christie disappeared to during those 11 days. When starting your review I thought this was a fictional account of what might have happened :P

Mystica - it's a good book but I would also point you in the direction of Agatha's own autobiography and her later archaeological memoir.

Alex - How funny! She actually went and statyed in a hotel in Harrogate, Yorkshire after faking a car crash but had to reveal herself when a chambermaid recognised her from a photo in the newspaper.