Well, it’s 28th June and this edition of the Literary Giveaway Blog Hop has drawn to a close.  Unfortunately, I wasn’t able to visit many of the other participating blogs as a busy weekend was followed by a business trip but, judging by the blogs I did manage to get to, there will be some very lucky winners today.

Anyway, I was offering two people a copy of the PG Wodehouse book of their choice from my list of ten favourites.  Thank you to every one who popped by and commented but there can, I’m afraid, be only two winners and they are……………..

Secondly, Lilian from A Novel Toybox, who asked me to make a choice for her.  So, she will be receiving a copy of the Code of the Woosters, with my compliments.

Congratulations and I will be in touch with you both to get delivery details shortly.
Posted by Falaise at 11:03 AM No comments:

Literary Giveaway Blog Hop - Come and Get it! 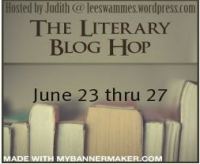 Time seems to pass at an ever increasing rate of knots these days and it doesn’t seem five minutes since the last Literary Giveaway Blog Hop.  Still here we all are again and, as ever, this edition of the hop has been wonderfully organised and hosted by Judith at Leeswammes Blog.

As with my previous participations in the giveaway, I like to give people something of a choice and so, as before, I have listed below ten books from which you may choose but this time I’m being more restrictive as I am taking another opportunity to proselytise shamelessly on behalf of one of my favourite authors.

I’ve written elsewhere on my blog about how I came to discover P.G. Wodehouse as a schoolboy and he has remained a central part of my reading habits ever since.  His effortlessly elegant prose and humour is sublime and the eternally sunny and pleasant upper class England that forms his fictional world remains a world that never fails to cheer, no matter how bad or sad a mood I’m in.  I truly believe that he is one of the greatest humorists who has ever written in the English language.

Of course, if you are familiar with Wodehouse, none of this will be a surprise, unless you are one of those people who was hiding behind the door when God was handing out senses of humour.  If not, then I heartily recommend almost any of his books as a cure for the blues and a joyful treat.

Wodehouse is, of course, chiefly known for Jeeves and Wooster but, in his lengthy career, he gave us many more wonderful characters such as Lord Emsworth and Galahad Threepwood, Psmith, Ukridge, Lord Ickenham and Mr Mulliner.  They are all well worth checking out and, hopefully, I will be giving two of you the chance to do so.

I’ve listed below ten of my favourite PG Wodehouse books, ranging from the classic Jeeves and Wooster stories through to lesser known works.  All you have to do is to read the list and then leave a comment, telling me which one you would like to receive.  Once the Literary Giveaway Blog Hop finishes on Wednesday night, I will randomly select two of you and those of you who come out of the hat will receive a lovely hardback copy of the gorgeous Everyman edition of the book you requested.

1.       Psmith in the City.  This is probably PGW’s most autobiographical book and centres around the exploits of Psmith (with a silent “P”) and his faithful amanuensis, Mike Jackson, in the New Asiatic Bank.

2.       The Code of the Woosters.  In my opinion, one of the best Jeeves and Wooster books, this has Bertie forced into stealing a silver cow creamer by his Aunt Dahlia, whilst desperately trying to keep two of his chums engaged to girls who might otherwise threaten to marry him and to avoid a thrashing from the awful Roderick Spode.  Classic.

3.       Summer Lightning.  This instalment of the Blandings Castle saga has the usual quota of stolen pigs, imposters infesting Blandings and sundered love affairs but centres around the manuscript of Galahad Threepwood’s scandalous memoirs, a document so racy that half the titled aristocrats in England would be deeply embarrassed should they ever see the light of day.

4.       Uncle Dynamite.  The fifth Earl of Ickenham, better known as Uncle Fred, is on the loose, as Lady Ickenham has gone to the Caribbean for a wedding.  This spells trouble for his long-suffering nephew, Pongo Twistleton, as Uncle Fred determines to resolve Pongo’s problems in his own inimitable and ever so slightly dodgy way.

5.       The Inimitable Jeeves.  Opinion seems to be divided as to whether PGW’s short stories are as strong as his novels.  I am firmly in the “yes” camp on this and would cite this collection of interlinked Jeeves and Wooster stories in support of this.  Frankly, I’d have included it solely because of the brilliant “Sir Roderick Comes to Lunch” even if the others weren’t also hilarious.

6.       Mulliner Nights.  Mr Mulliner is the leading light of the Angler’s Rest pub, in which he can usually be found dispensing wisdom through the medium of stories involving members of his widely spread family.  This is a collection of nine stories that are little gems of gentle humour.

8.       The Clicking of Cuthbert.  Although a keen golfer, Wodehouse never took it seriously (unlike cricket, about which he was fanatical) and he wrote a number of very funny short stories set in a golf club.  These were usually narrated by the Oldest Member, an archetypal pub bore, who would lurk in the clubhouse bar, just waiting for the chance to unleash his stories on an unwilling public.

9.       Carry on, Jeeves.  More Jeeves and Wooster short stories but, in a number of these, Bertie has fled to New York, following some unpleasantness with Aunt Agatha.  This volume contains two more of my favourite PGW short stories, “The Artistic Career of Corky” and “The Aunt and the Sluggard”.

10.   Psmith, Journalist. Another PGW book set in New York, this one is unusual as he actually deals with an issue of social conscience, slum landlords, a departure from his usual refusal to take anything seriously.  It’s a oddity in his catalogue but still great.

So, there we have it.  Ten to choose from so leave a comment with your choice below and then go and visit one of these other participants in the giveaway.  Good luck and come back on 28 June to see if you have won!