2,218: Autumn, All the Cats Return by Philippe Georget

As I mentioned in my previous post, I have a serious backlog of books to review from my recent 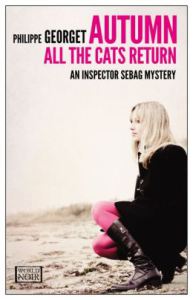 period of purdah.  And, of those, a small (but generally wonderful) number are books that were very kindly made available to me by publishers for review.  I feel terribly guilty about this and so this, and the next few, posts will be my attempt to catch up on these.

The first of these is Autumn, All the Cats Return, a member of the Europa Editions' World Noir stable,  provided to me by Europa so that I could write a piece for the equally brilliant Shiny New Books site.  As is evident from the fact that Terence Jagger produced this excellent review for SNB, I singularly failed to do so (mea culpa, mea culpa, mea maxima culpa!).

As I've not yet read a duff World Noir publication, I wasn't surprised that I thoroughly enjoyed Autumn, All the Cats Return.  I like my Euro noir to reek of its home country and, from its preposterously elliptic title (and the original French, "Les Violents d'Automne is no better) to its gloriously laconic hero, Gilles Sebag, and its drippingly atmospheric setting in Perpignan, this novel is about as Gallic as Gauloises, Depardieu, Asterix and sneering Anglophobia.  I loved it.

The book opens with the discovery of a murdered pensioner, executed in his home with a single bullet in the neck.  Above him, the initials, "OAS" have been daubed in black paint.  The OAS, of course, was the far-right paramilitary group, formed in the early '60s to resist any moves by France to give Algeria its independence, and which infamously attempted to assassinate General de Gaulle after he signed the Evian agreement that granted Algeria her independence.

But what does this all mean?  Was the pensioner a former member of the OAS, killed by an Algerian immigrant?  Or was this a resurgence of the OAS and a killing of one of its enemies?  Soon after the killing a controversial monument to the OAS in Perpignan is vandalised and Sebag becomes convinced that the two are linked as part of a revenge campaign against the remnants of the OAS.

What ensues is a police procedural, combined with a wealth of noir tropes, all set against a rich Franco-Catalan background and interwoven with an exploration of the violent and complex history of Algerian independence and the OAS.

Sebag is almost your classic noir detective.  As prone to inner monologues as any noir hero, Sebag is cynical and fatalistic.  From the beginning, his disillusion comes across:


The last few years, he’d found his work disagreeable. The routine, the violence, the lack of internal recognition, the citizens’ scorn. You had to put up with all that, and for what? When he’d enlisted in the police force, he’d imagined he’d be a kind of physician for a sick society. It took him a while to understand that he was no more than a minor nurse doomed to dress suppurating wounds with outdated ointments. Criminality would never stop, it couldn’t stop, it was part of human nature.

On top of this, Sebag is convinced his wife has been having an affair and is tortured by his internal debate as to whether to confront her about it or not.

About the only thing that stops him from being pretty much an archetype noir detective is the fact that, his suspicions (which may or may not be baseless) about his wife's fidelity apart, he is happily married with an adoring teenage daughter.  This latter becomes important to the plot as she asks her father to investigate the apparent hit and run death of one of her friends, a death that Sebag comes to believe may be linked to his case.

Ever since I read The Day of the Jackal as a boy, I've had an interest in the OAS and France's retreat from Algeria and so Autumn, All the Cats Return was always going to appeal to me.  What I didn't expect, though, was to find the hero so intriguing and likeable.

Crticisms?  Well, yes.  I hate, absolutely hate, the title.  Otherwise, it's a great read and another piece of evidence to support my growing conviction that I can simply pick up any World Noir publication, safe in the knowledge that it will be interesting and enjoyable.

Hello, I'm Back - Is Anyone Out There?

It's been exactly a year since I last posted and, although I may have been totally idle in online terms, it has been a thoroughly eventful 12 months.

As those of you who have been kind enough to read this blog previously will know, my father passed away in April of last year and, for various reasons, the practicalities of getting probate and executing his will fell into my lap and ended up swallowing inordinate amounts of time, pretty much eating up the whole of summer.  The strangest thing was that doing all this, and trying to support my mother, meant that I really didn't grieve or feel much at all emotionally about his death. until well into last winter.  Even now, I'm not sure whether I've grieved and come through it, or whether it's still there, waiting to jump out and mug me when I least expect it.

After all this, I had been hoping for a quiet autumn, time to rest and recuperate and get back on an even keel but, in October, I was offered a fantastic new job, a real once in a lifetime opportunity.......in Switzerland.  So, having visited the office (in between Zurich and Luzern) at the end of October, we managed to find a flat, register mini-Falaise for school, rent out our house in London, dispose of most of our possessions and stuff (fitting a large house-worth of stuff into a flat was never going to be practicable), go through the fairly traumatic process of mini-Falaise leaving her school, which she adored, and move, lock, stock and barrel to Switzerland, all of which we achieved by the middle of December, in time for a nearly white Christmas (it snowed on 27th December!).

Exhausted, discombobulated and unsure of how things would pan out, we saw in the New Year quietly, registered ourselves with the local canton, found that mini-Falaise had fallen in love with ice-skating but wasn't so fussed about skiing and got ready for the start of my new job and mini-Falaise's new school.

Well the good news is that my job seems to be going well and I'm thoroughly enjoying it.  Mini-Falaise's school, however, was the bad news.  For reasons (both academic and social) which I'd rather keep private, it just didn't work for her and she was changing from a child who bounced out of bed to go to school in the morning to a thoroughly unhappy child.  So, I packed Mrs F and mini-Falaise onto the train back to London, where they spent an uncomfortable few weeks until they could find a flat to live in.  Luckily, her old school welcomed her back with open arms and she was very quickly back to her old self.

So, we now live an odd,  split life.  I live in Switzerland during the week whilst they live in London in term time.  I fly back roughly two out of every three weekends and, as soon as term is over, they come out to Switzerland.  It's not ideal for me and Mrs F, but mini-Falaise gets all the benefits of her school in London and being around her friends, whilst spending her holidays cycling, lake swimming skating and roaming free in Switzerland.

Mrs F and I are permanently exhausted - Mrs F from the stresses of being min-Falais'e sole carer during the week and me from the combination of a busy job and seemingly spending much of my life in airports on Friday and Sunday evenings and the odd very early Monday morning - but it won't be forever and my 15 minute walk to work  along the lakeside, seeing the Eiger and the Jungfrau mountains in the distance is a definite compensation on a sunny day.

Apparently, losing a close family member, moving house, changing jobs and emigrating all rank amongst the most stressful things that people do and I did them all in the space of 9 months.  But, of course, there are only so many hours in the day and so, some things have rather gone by the board -this blog being one of them.

Things now appear to have calmed down a bit and we are all getting into our new routine and so I am going to try and start blogging (and engaging with other blogs) again.  I have a huge backlog of books that I haven't yet mentioned on here and so the original premise of the blog may have to be quietly shelved but I do hope to be much more active on here from now on.