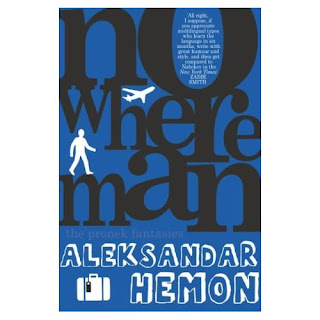 Take one Bosnian journalist, strand him in Chicago on the outbreak of war in his homeland, give him three years in which to learn English and what you get is a writer whose use of his second language is truly amazing.
For that, in a nutshell, is the story of Aleksandar Hemon.  He was at the end of a journalists’ exchange programme in 1992, when war broke out and he decided to remain in the US.  Despite having, by his own admission, only tourist English on his arrival, Hemon needed only three years to learn the language sufficiently well to be able to start writing his first book.  “The Question of Bruno” is a collection of a novella and some short stories and was critically well-received, garnering comparisons to Nabokov and Conrad.  This was followed by “Nowhere Man”, which was published in the US in 2002.
I was hoping that the RNG would be kind to me in its choice of my first book in the 1,001 Book challenge.  There are a fair number of books in the list that might well have strangled the project at birth if they had come out of the hat (yes, James Joyce, I’m looking at you).  Fortunately, the RNG came up trumps.
The Nowhere Man of the title is one Jozef Pronek, a Bosniak of Ukrainian ancestry, who, as was his creator, stranded on Chicago when the Bosnian war broke out.  The novel jumps between Chicago, Sarajevo, Kiev and Shanghai and relates a number of episodes in the life of Pronek, speaking from the perspective of different narrators, one or more of whom may, in fact, be Jozef himself.
The first thing that struck me about Nowhere Man was the use of language itself.  Hemon nuances each of his voices according to their expected mastery of English idiom.  He skilfully voices the idiosyncracies of immigrant speech and the lazy spoken language of the everyday Westerner.  Beyond this, Hemon’s use of English is pyrotechnic.  You are never more than a couple of sentences away from a description that makes you chuckle or gasp.  Maybe because English is not his first language (although Hemon claims to be “pathologically bi-lingual”), he uses words in unusual, but still correct, ways and makes the reader look at descriptions in a fresh way.
Pronek, like Hemon, is a stranger in a foreign land and, consequently, the loneliness and dislocation of the immigrant experience is central to Nowhere Man.  At one point, Pronek takes another McJob, as a paid door-to-door fundraiser for Greenpeace.  He adopts a new identity for each of his attempts at soliciting donations, in reflection of the essential anonymity of the immigrant.  It is also noteworthy that Pronek’s character itself is described differently in familiar settings like Sarajevo to new settings like Chicago.
At times, Nowhere Man is very funny, yet, at heart, it is a sad novel about a man adrift in a new world.  Yet the sheer luminosity of Hemon’s writing prevents it from sinking into misery.  The ending verges on the supernatural and forced me into thinking about the story from an entirely new perspective.  It could be viewed as a touch too surreal and, hence a distraction from the main themes.  This is a minor criticism, however.
I thoroughly enjoyed Nowhere Man and was left curious as to what happened next to Pronek and Rachel.  Was it a book I must read before I die?  Probably not, but I am glad I did.
Posted by Falaise at 8:03 PM No comments:

So, here are the rules for the 1,001 Books element of this blog:
1. I will be using the list set out in the 2008 edition of the book (which is a shame as if I used the 2006  edition, I would have completed about 15 more of the books!).
2. I will choose the order of the books randomly (using the rather wonderful Random Number Generator).
3. I will intersperse books that are not part of my challenge as I see fit.
4. When books that I have already read come up, I can choose whether or not to re-read them.
5. I can substitute up to 50 books on the list with books from other editions of 1,001 Books as I know there are some books on the list that I simply won’t be able to abide.
That’s it.
Anyway, I have used the trusty RNG to decide my first five books and…{pause for imaginary drum roll}…:
1. Nowhere Man by Aleksandar Hemon
2. Anton Reiser by Karl Philipp Moritz
3. Buddenbrooks by Thomas Mann
4. Broken April by Ismail Kadare
5. The Wasp Factory by Iain Banks
In the interests of full disclosure, the RNG spat out Treasure Island by Robert Louis Stevenson for me but, having not enjoyed it as a child, I don’t feel like giving it a second go. No special reason, I’m just being capricious.
Check back in a couple of days when Nowhere Man should be safely under my belt.
Posted by Falaise at 2:35 PM 2 comments:

I love to read. I’m the sort of person who always has several books on the go, who can’t travel anywhere without just a few too many books in his bag, who squirrels books away in any unfilled cupboard, draw or bag he can find and who has now even started to measure out his life in books.

Appropriately enough, it started with a book. “1,001 Books You Must Read Before You Die”, edited by Peter Boxall to be precise. 1,001 Books claims to do what it says on the tin – list the 1,001 books we should read before we die. I love lists. The top ten this, the greatest ever that, all are grist to my mill. So, a list of books? Perfect. I bought it. I then did what probably 99% of readers would do. I went through it and checked off all the books I’d read. There were surprisingly few – just over 80. As I’ve always thought of myself as reasonably well read, this came as a bit of a shock. Now, to be fair, the book is trying to cover the entire world and ranges across all time periods, so it can’t list every “classic”. So there are many great works that I have read which don’t make the cut.

It did, however, give me cause to think. It is fair to say that I’ve got into a bit of a rut on the old reading front. I’ve become less adventurous than in my younger days. I tend now to read books on history, food and politics, with the odd thriller and sports book thrown in. In particular, I have become a lapsed fiction reader and, on the odd occasion when I do pick up a non-genre novel, it tends to be by an author with whom I am familiar. So I have come to a decision. I am going to read my way through the books listed in 1,001 Books and blog about each one on this site. I have set myself a few rules and will write about these in my next post.

So where do the remaining 1,605 books come in? Simple. I came across a superb spreadsheet listing all the books in each of the 2006, 2008 and 2010 editions of 1,001 Books and enabling the user to keep track of their reading. If you are interested, here is the link - http://johnandsheena.co.uk/books/?page_id=1806. It also has a tool which allows you to calculate how many books you have left to read before you die, based on your life expectancy and estimated reading speed. As I have grown older, and even more so since the birth of my daughter, I have become morbidly prone to calculating things by reference to when I expect to keel over. How many more World Cups will I see? How old will my daughter (or, optimistically, granddaughter) be? How much will I be able to save and will it last? As you can imagine, I couldn’t resist this tool and it spat out the magic number of 2,606 books for me.

Now, obviously, this is a spuriously accurate number. For a start, my real life expectancy is probably greater than the average life expectancy as I have already attained a reasonable age. Also, as someone in full-time employment, my available reading time is likely to increase once I retire (assuming the Government ever lets me). Medical developments and better healthcare may also give me a little more time. So, hopefully, I will be around for book 3,000 and beyond.

Nevertheless, I am going to accept the number, am going to blog about the additional 1,605 books (which will be any books I damn well like) as well as my original 1,001 Books and will laugh in the face of Old Father Time when I get to book 2,607. I hope you can join me for the journey and that you may even find some books for you along the way.