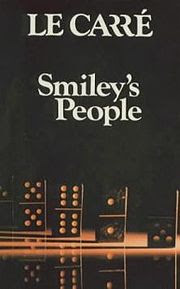 Although I’m a big fan of Ian Fleming’s James Bond novels, I can’t help but think that they have done spy novels a tremendous disservice.  Even though they are far less shallow than the films, they still slide over the heart of espionage, skipping over subtleties with a gadget, a fight or a perfectly made cocktail.
Not so with le Carré.  His novels strip away all the illusions we may have about the glamour of spying, exposing the corrosive effects of lives of constant betrayal and suspicion.  Even Smiley, probably one of the drabbest heroes of literature, is not immune to this, suffering from the acid drips of repeated lies, exploitation and treachery.  Like its predecessors in the so-called Karla trilogy, Smiley’s People is an unemotional exploration of the darker side of human nature and the effects on otherwise decent men of being required to live and work on that side.
At the end of The Honourable Schoolboy, Smiley has been outmanoeuvred by the odious Saul Enderby who, together with Sam Collins applies a stiletto to Smiley’s back and replaces him as Head of the Circus.  This state of play continues to exist at the beginning of Smiley’s People, with George in enforced retirement and again deserted by his errant wife, Ann.
But old spies never truly retire and Smiley is pressed back into service, albeit on a totally deniable basis, by Enderby and Lacon, a senior civil servant with no distinguishing virtues.  A relic of the Circus’ past, an Estonian émigré who had once led a spy network controlled by George has turned up dead on Hampstead Heath, having tried to re-establish contact with the Circus.
Although Lacon and Enderby merely want the matter swept under the carpet by George, he begins to investigate and finds a connection to a old Russian woman living in , whose daughter’s identity has been taken by the KGB to use as a “legend” to insert an agent into .
Smiley slowly pieces together the puzzle by forcing former colleagues and agents to give him information and himself travelling through to assemble the clues.  It becomes apparent that the “legend” has been used unofficially by Smiley’s nemesis, Karla, to get his illegitimate daughter out of the Soviet Union and into a hospital in .
There’s a different feel to Smiley’s People than the other two books in the trilogy.  Although the pace of the story remains deliberate, Smiley is a much more active character, not being content to pull strings from behind the scenes but actually getting out there to find information and manage a sting that enables him finally to make contact with Karla.
Tinker, Tailor, Soldier, Spy began the trilogy by telling the story of Karla’s greatest victory over Smiley by infiltrating the Circus through Bill Haydon and encouraging Haydon not only to betray Smiley but also to have an affair with Ann, adding a second betrayal.  Smiley’s People, therefore, provides a satisfying conclusion as Smiley uses Karla’s own techniques against him, using the leverage of his knowledge of Karla’s weakness – his daughter – to force him to defect.  At the very end, we see Karla walking across a bridge from East to .  Symbolically, as he arrives in the West, he drops the cigarette lighter that he had taken from George in Tinker, Tailor, the lighter inscribed from Ann to George and which hinted at George’s weak spot.
Yet Smiley’s revenge is hollow.  He leaves the lighter on the ground and takes no pleasure in his incredible coup.  He is even diminished by his success.  He is less of a man for having lowered himself to Karla’s level by using his daughter against him. I was left with an empty feeling at the end, that there were no winners, only men beaten by the demands of the secret world.  Smiley has served his country faithfully, despite the politics and the treachery within his own service and has been left broken in spirit, an anonymous casualty of the Cold War.
I could leave it here and simply say that Smiley’s People and the Karla trilogy as a whole are supreme examples of the true spy novel, setting a standard that hasn’t yet been matched by any Western writer, although Robert Littell and Alan Furst come quite close, Graham Greene would definitely be up there if one considers some of his books to be spy novels and Charles Cumming is also treading some of the same ground.
But I don’t think that is fair.  Like Greene, le Carré deals with the human condition.  He counterpoints professional treachery and deception with the personal.  Each of the books in the Karla trilogy has his characters suffering on a personal level, with Smiley himself suffering repeatedly from the cheating of his wife.  In Smiley’s people, there is an awkward scene where Lacon takes George for dinner and spends the meal trying to get George to give him relationship advice as he too is facing losing his wife.  Never a strong character, this leaves him looking even more foolish and ineffectual than ever.
In some ways, I think le Carré almost uses the world of espionage as a prism through which to explore these aspects of the human character, to show what happens to people who both perpetrate the lies and are also the victims of hem.  It is notable that all of the former agents and colleagues whom Smiley involves in his investigation in Smiley’s People are somehow damaged or reduced by their involvement with the Circus, from Toby Esterhase, eking out an existence as a shady art dealer to dear old Connie, an alcoholic wreck, living in squalor with her partner.  There’s not a great deal of hope or happiness in le Carré’s writing, just a sense of the futility of it all.
Posted by Falaise at 1:33 PM

What a great review, not just of this book but of Le Carré's work. I first read the trilogy in my twenties, and I know it would read very differently all these years later. I've just recently discovered your blog - I love the idea behind it and have been doing my own calculations.

Did you know that you can create short urls with Shortest and make cash for every visit to your short links.

VaporFi is the #1 electronic cigarettes provider.

I admire this article for the well-researched content and excellent wording about writing tips. I got so involved in this material that I couldn’t stop reading. I am impressed with your work and skill. Thank you so much.
online Abcya games
friv Games for kids free
frivland.blogspot.com