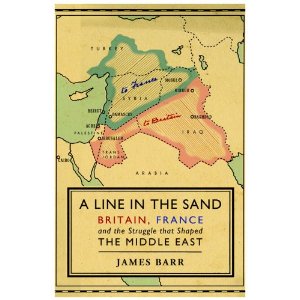 James Barrs’ new book, A Line in the Sand, is a fascinating study of the way that France and Britain schemed and intrigued against each other from the First World War through to the end of the 1940s to maintain their influence in the Middle East and, in doing so, laid many of the seeds that would grow into today’s Middle East conflicts.
It opens with the Sykes-Picot agreement of 1916, in which Sykes, a British chancer of a politician and Picot, a monomaniacal French diplomat, carved up the Ottoman Empire’s Middle Eastern holdings between the two countries (save for a small Russian interest) with no concern at all for the inhabitants of the region, a behaviour pattern that would repeat itself throughout the period of the mandates that the League of Nations gave to the two countries in the region.
It’s a particularly unedifying story, from which no one emerges with much credit, save, possibly, T.E. Lawrence, who was at least consistent in his desire for Arab independence.  The British come across as deceitful and inconsistent, advocating Arab independence when it suited them in order to undermine the French mandates in Syria and Lebanon, but promising the French their support to maintain their mandates when French support in the World Wars was seen as more necessary.  The role we played in the creation of the state of Israel also comes under scrutiny and our undignified haste to depart Palestine at the end of the mandate opened the way to the opening of massive violence between the Israelis and the Palestinians.  It was a shambolic and cowardly exit.
For all of that, the Arabs and Israelis are hardly guilt-free either.  The Arabs are portrayed as often being as interested in their own internal squabbles as with gaining independence with many of them were happy to compromise for money or promises of power within a British or French controlled area.  The Israelis are shown as ruthless terrorists (or freedom fighters, depending on your point of view), happy to murder British soldiers and civilians and being responsible for massacres of Arabs, particularly at Deir Yassin.  Barr even recounts how some Jewish militants offered to fight the British on behalf of Hitler, in return for his support for a Jewish state, something that beggars belief in hindsight.
But the real core of Barr’s story is the friction between the British and the French.  Whereas Britain appears to have been more focused on protecting its sources of oil and its Indian possessions, the French were more about the eternal glory of France and maintaining its influence in the world as a great power.  As well as generally undermining the British mandate in Palestine, they were prepared to fund, arm and provide refuge for the Jewish guerrillas who were carrying out attacks on British people inside Palestine in order to get revenge for their perceived humiliation by Britain in the Levant.  It is a truly sickening tale which even made me, a confirmed Francophile, angry and bitter.  Although there are no good guys in this book, the French come across as the worst of the bad guys, with a cast of characters, including de Gaulle himself, who were fanatical about maintaining French prestige, regardless of the cost.
A Line in the Sand is a fascinating book, both readable and scholarly, and should be read by anyone with an interest in the Middle East.  He has had access to previously unreleased papers which shed light on how the Anglo-French frictions played such a large part in the creation of the modern Middle East.  Indeed, the naked hostility that the two nominal allies had for each other in the region came as a surprise to me.
I’m generally a bit of a cynic about politicians and this book has only confirmed me in this view.  Morality, decency and honesty all took a back seat in the dealings of Britain and France in the region and the whole, depressing conclusion that I have to draw is that the Middle East may well have been a more peaceful place had we and the French not got involved.  It was not one of the most glorious episodes in either country’s history.
I was provided with an electronic ARC by W.W. Norton & Company, Barr’s American publisher, for which I am very grateful.
Posted by Falaise at 11:06 PM

Well thanks very much for your review. I'm really pleased you found it an interesting read.

Start following our signals right now and make up to 270% per day.