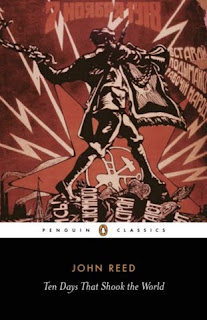 There’s a moment at the very end of John Reed’s first-hand account of ’s October Revolution of 1917 that made me give an involuntary groan.  The bolsheviki have assumed power in and and the Revolution is, at least for now.  The workers, peasants and soldiers come together to celebrate and to look forward with unbridled optimism to a socialist future and the creation of a better society.
It’s hard for the modern reader, whatever their political views, not to draw breath and feel a sense of foreboding when reading this scene as we know that the innocent optimism expressed here will soon be beaten into submission by the ascension of Stalin, the corruption and repression of the Soviet system and the impact of a sclerotic economy.
Although John Reed was working as a journalist for an American socialist newspaper in covering the Russian Revolution, he is open about his engagement in it.  Reed was no mere observer but, at least in moral and political terms, a participant.  He may not have acted physically to help the Revolution along but it is clear in his writing (and is admitted by him) that he was in sympathy with the Bolsheviks.
At times, this is awkwardly obvious as his strained attempts to put the Bolsheviks on the moral high ground show.  His closeness to the new regime can also be seen in the fact that, after his untimely death in 1920, he was buried a hero of the revolution in the Kremlin.
Nevertheless, despite his obvious bias, Ten Days That Shook The World remains probably the leading first-hand account of the October revolution.  It is important to note, and sometimes overlooked, that this was not a revolution against the Tsar – he had abdicated following the February Revolution – but was a revolution against the provisional government of Kerensky that had been formed amongst the political parties other than some of this on the far left.
Disaffection had set in with the policies of this government which did not appear to its critics to be radical or socialist enough and the Soviets, essentially workers’ councils, had grown to be a competing source of power.
Reed’s book tells vividly of the rising tension between government, Soviets and people in Petrograd (the new, less German name for ) in the months after Lenin’s return from exile in in April 1917.  Increased suffering by the Russian army on the Eastern Front with Germany and a number of domestic crises reduced the ability of the provisional government to exercise power and enabled Lenin’s Bolsheviks to increase their influence to a point where, in the chaos into which Petrograd had fallen by October 1917, the Bolsheviks were able to emerge and take control of Russia.
There is a real immediacy and pace to Reed’s writing and even though I knew what was going to happen and even though I despise everything the Bolsheviks were, it still had me willing them on.  The journalist in Reed was also skilled in telling part of the story through encounters he had with individuals.
Reed’s view was that the October Revolution was led by the workers and rank and file soldiers who almost dragged the politicians along, even outrunning many of the Bolsheviks in their revolutionary fervour.  I am slightly cynical about this but the overall tone of the book suggests the Bolsheviks taking power, not after a carefully planned coup, but almost accidentally, having been carried along by events and simply being the most decisive political group.  Indeed, the iconic storming of the is depicted as nothing of the sort.  Reed’s description has the Bolsheviks pretty much walking in and assuming power by virtue of just giving clear instructions to functionaries.  In many ways, Reed’s Bolsheviks were beneficiaries of the inchoate will of the people rather than being a conscious popular choice.  In light of what would come next, I found myself at various points in Reed’s text lamenting the coincidences and the indecisiveness of other political groups and marvelling at the seemingly tiny decisions and events that enabled Lenin to take control and the Communist Party then to wield absolute power for the next three quarters of a century.
Another startling point coming out of Ten Days That Shook The World is the lack of importance of Stalin in the narrative of the Revolution.  Given that, for many people, the Revolution was really just a stage setter for Stalin’s brutal rule, it is notable that he only merits two mentions in the text, one of which is just as part of a list of Commissars and the other as a counter-signatory of a letter.  Trotsky, Stalin’s great enemy is far more present in this narrative, which may be one reason why, despite Lenin’s endorsement of Reed’s book, it was banned in the by Stalin.
This book is essential reading for anyone interested in or that period in history.  I’m also a great believer that we can find lessons for today in history and would recommend it to politicians in the and today as a warning of how general unrest and disaffection with government can spiral into a full-blown uprising without any conscious plan, potentially enabling an opportunistic but determined minority party to fill the void.  It led to catastrophe in – let’s hope nothing similar happens here in these troubled times.
Posted by Falaise at 2:28 PM

Order a professional Sparkling White Smiles Custom Teeth Whitening System online and get BIG DISCOUNTS!
* Up to 10 shades whiter in days!
* Results Guaranteed.
* Better than your dentist, for a fraction of the cost.
* Same strength as dentists use.