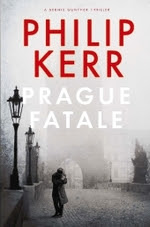 Prague Fatale is the eighth book in Philip Kerr’s series of novels featuring detective Bernie Gunther.  The books, although they jump back and forth in Bernie’s timeline, roughly follow his career as, firstly, a Berlin police detective in the 1930s, through his short-lived stints as the hotel detective at the Adlon, one of Berlin’s finest, and private detective, and back to being a police detective, albeit under the Nazis and with a technical commission in the SS.  The novels are an engaging blend of historical fiction and hard-boiled detective fiction, with Bernie as a Germanic Philip Marlowe.
In this new instalment, Bernie is back at his desk in .  It is 1941.  The Wehrmacht is fighting its way into the Soviet Union and the persecution of ’s Jews is reaching its pre-Final Solution zenith.  Bernie is trying to help the two Jewish sisters living in the same block as him by taking them tinned food when he comes upon an attempted rape, which he prevents.  With this being a Bernie Gunther story, the victim turns out to be a wise-cracking beauty with whom he begins an affair.
So far, so good.  But there is a problem just around the problem in the form of Bernie’s ultimate boss, one Reinhard Heydrich.  Recently promoted to Deputy Reich Protector of and , Heydrich is worried both about a group of Czech resistance fighters known as the Three Kings and threats to his own personal safety.  Heydrich makes Bernie an offer he simply can’t refuse (especially given his own known lack of Nazi feelings).  Bernie becomes Heydrich’s personal detective and moves to , along with his new lady friend.
Murder indeed does happen but Heydrich is not the victim.  At a weekend house party at Heydrich’s castle in , one of his adjutants, a homosexual who was sent back from the Eastern Front in disgrace for refusing to take part in the murder of Jews, is found dead in his locked bedroom, both drugged and shot.  Bernie takes charge of the investigation to unmask the killer.
Prague Fatale begins like previous Bernie Gunther novels as a World War II set hard-boiled detective story.  Although over the course of the series, Bernie has moved from being wise-crackingly cynical about the Nazis and Germany’s situation to being a little more melancholic, there is still plenty of fast-talking , a wealth of urban Berlin detail and some nice historical touches, particularly a clever snapshot of Bernie going through Heydrich’s diary and finding an entry scheduling a meeting at Wannsee in Janary 1942.  As World War II aficionados will appreciate, this is a reference to the infamous Wannsee Conference, at which the Final Solution was promulgated and adopted.  It is a nice idea, merely making a throwaway reference to such a significant event and lends added historical authenticity to the book.
About halfway through, though, the entire style seems to change and we shift into an Agatha Christie-esque country house murder, which then morphs further into a classic John Dickson Carr-type locked room mystery.  Now, none of this throws Bernie off his stride, especially as the suspects are all high-ranking SS and SD officers, whom Bernie thoroughly enjoys interrogating.  Our hero unmasks the killer but, being Bernie, there is a typically downbeat ending for him.
I found Prague Fatale both better and worse than its predecessor, .  It has a cleaner, more cohesive story line and avoids both the jumping around in time of Field Grey and some of the internal inconsistencies that it introduced into Bernie’s backstory.  I can appreciate that some Bernie fans will get irritated at the introduction of soft-boiled detective themes into Prague Fatale but I actually quite enjoyed the excursion.  I am also unable to resist the image of Reinhard Heydrich, the Butcher of Prague, as an inveterate fan of Hercule Poirot and Agatha Christie’s novels.  I have no idea whether there is any basis in fact for this but it makes for an unsettling, if amusing image.
On the down side, there is less meat to Prague Fatale than any of its predecessors.  Although Field Grey was flawed as a story, it was an interesting examination of Bernie’s character and the nature of the compromises required in the Third Reich.  Prague Fatale has no such depth and is merely a clever detective story.  Bernie is far less complex here, with none of the moral ambiguities of earlier books in the series.
It’s probably fair to say that the original trilogy, published in the late ‘80s and early ‘90s are superior to the later books (and may well have been intended to be a complete series in themselves) and Kerr may well be jumping back and forth in time to fill in gaps and make sure he has squeezed all he can from Gunther but, even so, this is one of my favourite detective series and well worth a look (but start at the beginning, not the middle).
Posted by Falaise at 5:16 PM

Start following our signals NOW and profit up to 270% per day.