Christmas has officially arrived early at Falaise Towers.  Unofficially, of course, it has been here for a while, with mini-Falaise having been asking about it for a couple of weeks now, especially after being cast as a star on the Christmas tree in her nursery school nativity play.  Although tedious at times, there are some compensations for the constant questions about Santa Claus as the big man is also an excellent disciplinary tool – as in “If you don’t behave, I’ll call Santa and tell him not to come.” Works every time between November and December 25th.
Anyway, on a more official note, today is Stir-up Sunday and we joined with tradition in making our Christmas Pudding this morning.  We all took our turn stirring the beast, youngest first and we all made our wish.  I’ve not made a Christmas Pud before and have gone for Nigella’s recipe, using extravagantly expensive Pedro Ximenez sherry as the alcohol of choice.  To be fair, it is smelling very Christmassy and Nigella has always been a favourite of mine, despite her recent descent into self-parody and the ridiculous mendacity of pretending that her TV studio is really her home and that the demographically perfect gang of renta-mob –extras supplied by her casting agent are really her bosom buddies.
Nevertheless, Nigella is OK with me for the simple reason that her recipes work for me.  I find that I can cook her food, whereas some other writers, such as Saint Delia of Norwich City, just don’t work when I try their dishes.  Rick Stein does, Simon Hopkinson does, Nigella does and Raymond Blanc does.  Unfortunately, neither Delia nor Gordon Ramsay do.   Noone’s fault, just the way it is.
Back to Stir-up Sunday, which always falls on the last Sunday before Advent.  Back in the old days, the 1549 Book of Common Prayer dictated that the Collect for this Sunday began:
“Stir up, we beseech thee, O Lord, the wills of thy faithful people; that they, plenteously bringing forth the fruit of good works, may of thee be plenteously rewarded; through Jesus Christ our Lord. Amen.”

This, allegedly, reminded the ladies of the congregation, and their cooks, that it was about time to get the Christmas pudding made so that it would have time to mature before the big day. Consequently, the making of the pudding became associated with this day.

Unsurprisingly, there is a distinct lack of cooks or other domestic staff at Falaise Towers and so it fell to me, assisted (in the loosest sense of the word) by mini-Falaise, to make the pudding. All three of us gave it the traditional East to West stir and made a wish. I have no idea what Mrs F’s is and mine will remain a secret but mini was very keen to explain that she’d wished for a Jessie from Toy Story toy for Christmas. She’s not slow, is our Mini-Falaise. She’s not very subtle either.

Hopefully you too have managed to get your’s done. Here’s a picture of the mixture before it went in the steamer – it looked and smelt a lot better after three hours of steaming! 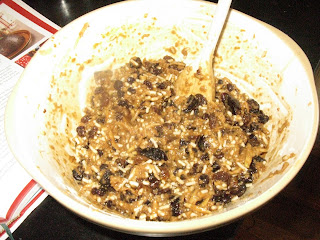