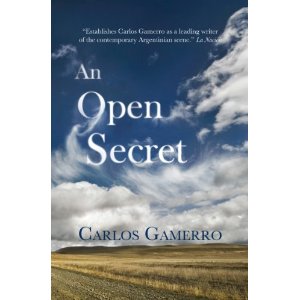 I’ll get the full disclosure bit out of the way up front.  I was sent a review copy of the new English translation of Carlos Gamerro’s 2002 novel, An Open Secret by Pushkin Press, its publisher.  I’m very grateful to them for this as it is not a book that I would probably have come across otherwise and, as such, is an object reminder to me to step outside my usual literary territory once in a while.
During the so-called Argentine “Dirty War” in which the ruling military junta violently repressed political dissidents, trades unionists and other opponents of the regime, thousands of individuals were illegally detained, tortured and often murdered.  Many of them were drugged, loaded onto airplanes, flown out over the and thrown into the ocean to drown.  As there were no dead bodies to evidence their deaths, the junta was able to deny that they had been killed.  They became known as Los Desaparecidos – The Disappeared.  According to the various estimates, between 9,000 and 30,000 Argentineans were disappeared between 1976 and 1983, either in this way or other equally terrible ways.  Pregnant women who were detained by the junta had their newborn children snatched from them at birth to be given to childless couples who supported the military government.
Fortunately, those times have ended and is now a civilian democracy but the memories live on and the plight of los desaparecidos is a perennially popular topic for Argentine novelists.
In An Open Secret, Carlos Gamerro has chosen to examine those times by focussing on a single (fictional) incident.  His protagonist, Fefe, is a young veteran of the Falklands War (or Las Malvinas, if you are from or other parts of ).  He has returned to Malihuel, the small town where his grandparents and parents were from and where he spent his childhood summers to investigate a disappearance that took place in 1976, on the same weekend as one Diego Maradona made his debut for ’s national football team.
Ostensibly collecting material for a novel, Fefe interviews many of the town’s notables about the events that led to the disappearance of one Dario Ezcurra, the town lothario and also an activist left wing journalist.  Slowly, a dark, sordid story of complicity and murder emerges from the mass of lies, evasions and self-serving memories that Fefe’s questions reveal until the unpalatable truth of Ezcurra’s “disappearance” is uncovered, as are the secrets of Fefe’s own parents and grandparents.
It would have been easy for Gamerro to portray Ezcurra as a poster-boy for protest journalism but this would have made the story much less textured and thoughtful.  Instead, he paints Ezcurra as a self-obsessed womanizer who leaves a trail of outraged and bitter fathers and (less so) mothers behind him.  In so doing, he shows forensically how the personal grudges of the townsfolk dovetailed with the political forces of the police and government to seal Ezcurra’s fate.  Instead, the people of Malihuel are complicit in his murder.  It is a nuanced characterisation that goes beyond a wish to varnish los desaparecidos as simple heroes but shows a desire to get at the naked truth.
Complicity is a common theme in many countries where totalitarian repression has taken place.  In both Nazi Germany and Stalin’s , for example, a similar cocktail of personal hatred and fear of the authorities combined to keep the populace not only quiet but also as silent participants in the repression.
This unwillingness to denounce or admit to the crime in their midst is sometimes referred to as a conspiracy of silence but, as Gamerro points out, it is anything but that.  Indeed, the inhabitants of Malihuel are only to happy to admit that, really, they knew what was happening and who was responsible.  Not a conspiracy of silence, more a “conspiracy of chattiness”.  At times, the flood of self-serving claptrap served up to Fefe by the self-justifying locals feels overwhelming, a sensation created in part by Gamerro’s clever, but irritating, decision to omit most punctuation in his characters’ speech.
What the locals also unwittingly reveal is that each and every one of them was more than a scared observer.  Ezcurra’s murder and the subsequent murder of his mother, killed because she wouldn’t stop protesting about his murder, could have been stopped if any of the local notables had objected to the police superintendent.  Yet they didn’t and thus prove the local military commander right when he says that the disappearances are perfect crimes because they are “committed in the sight of everyone—because then there are no witnesses, only accomplices.”
Gamerro also introduces some subtle touches of symbolism – Ezcurra’s body is dumped in the town’s lagoon, an echo of the dumping of victims in the Atlantic, and his mother is the only one to protest his death, an echo of the mothers of los desaparecidos who formed a protest group, the Mothers of the Plaza de Mayo – and the laconic way in which Fefe reports the self-serving nature of the locals is damming – in particular, there are two paragraphs in which rival hoteliers denounce each other for the same fault where every word other than their names and hotel locations is identical.
An Open Secret is a forceful exposition of the hypocrisy and cowardice that allow things like forced disappearances to occur and the long-term effects that they have.  It is a thought-provoking and powerful read and well worth the effort of getting hold of a copy.
Posted by Falaise at 3:11 PM

Great review! I think that it takes some courage for an author to give a subject like this the balance it deserves. Do you know how the book was received in Argentina?

Every time someones mentions Las Madres de Plaza de Mayo I think of Sting's song "They Dance Alone". I think it's about them

Thanks, Alex. I know that he is very well regarded in Argentina but I don't know what the reaction was to this book. I believe that there is quite a body of literature now dealing with the Disappeared so I don't suppose it was seen as being particuarly controversial but I may be wrong.

Did you know you can shorten your links with AdFly and get $$$ for every click on your short links.

Follow our signals NOW and make up to 270% daily.