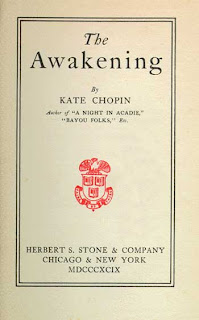 I greatly enjoyed reading this post. Your thoughtful discussion is quite insightful. I completely agree that Edna's awakening is universal and not strictly a feminist message.

In particular, I tend to view this as an existential text, which in my definition fits perfectly with your summary: "the true individual must dare and defy society to establish his or her individuality in the midst of a conformist group." I think this is the basis of all existential literature, and it adds a significant dimension to the reading of the text. The only thing I would challenge is your interpretation of her suicide. I don't think that it was simply a case of "killing oneself to preserve one’s sense of individuality." Rather, I would argue that she felt great despair in the inability to reconcile her disparate identity. I don't think she was trying to accomplish or preserve something in her suicide. Instead, I think she was giving up.

Now, this is indeed depressing and certainly not a promising solution for feminists. But I think it is very true to existentialism, and as you said, it makes for a beautiful literary ending.

I don't mean to self-promote, but if you are interested in a slightly more detailed explanation of this, you can read my thoughts at this link: http://thelitquest.blogspot.com/2011/01/awakening.html

Thanks for leaving such a great comment. I'd set out the "preserving individuality" interpretation of Edna's suicide as what I believe is the most commonly held interpreatation. I personally actually agree with your view on it and, although happy with the suicide from a literary perspective, I too think that it's not a great act from a feminist perspective.

I have popped over to your blog and read your review. It's funny but I hadn't actually tied it in with other existentialist stuff I've read (Camus and a bit of Sartre) but you are dead right!

Thanks for responding, Falaise. I really do enjoy your blog!

Are you trying to make cash from your websites or blogs using popup advertisments?
If so, did you try using Clickadu?

Did you know that you can create short links with AdFly and get $$$$ for every visit to your short urls.