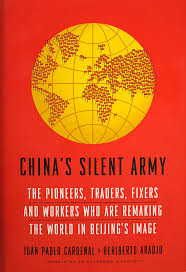 One cannot help but be amazed at the commitment and energy of Juan Pablo Cardenal and Heriberto Araujo, the authors of China’s Silent Army.  In 2009, they began a two year investigation into the overseas investments of Chinese companies which, given the nature of much Chinese investment activity, took them to many difficult and even dangerous environments in Africa, Central Asia and Latin America.  It is, therefore, a shame that the resulting book, whilst interesting and thought provoking is marred by a near conspiracy theorist view of China’s intentions.

The book is loosely organised into sections in which the authors visit a country in which Chinese investment has been made and, after recounting their discoveries, link the story to a broader analysis and conclusion.  We see the effects of jade mining in Myanmar, an unlawful Chinese owned casino in Laos, a seller of cheap clothing in Cairo, a massive shopping mall in Dubai selling only Chinese products from Chinese-owned emporia, logging in Russia’s Far East and mining in Zambia amongst others.

The stories are fascinating and speak volumes both to the energy and drive of individual Chinese but also to the explosive and seemingly inexorable growth of the Chinese economy since the days of Deng Xiaoping and the “socialism with Chinese characteristics” theory.  Chinese investments also create local jobs, bring money into local economies and enable the creation of infrastructure in desperately poor countries without many of the strings and catches insisted upon by Western investors.

Cardenal and Araujo acknowledge these benefits but point out the dark side of Chinese investment.  Many of the jobs on big projects are given to imported Chinese labour and local employees are often forced to work for very low pay in dirty and dangerous conditions.  One of the mines described in China’s Silent Army was acquired by a Chinese company from a Western company and the pay and conditions of the local workers were subsequently reduced to an even lower level than those offered by the previous owners.
Furthermore, Chinese companies often act with little or no regard for the local environment or for the human and social costs of their operations.  The rate at which some of the forestry operations described by Cardenal and Araujo are denuding the local forests is breathtaking (and not in a good way) and the exploitation by China of Myanmar’s jade resources without care for the long term economic health of the local area is sickening.  The inflow of cheap Chinese made products that tends to accompany Chinese investment is also problematic, strangling and stifling the relevant domestic market.

All these points are fair and well-made and there is a significant risk that for many developing economies, inviting the Chinese dragon in could lead to severe damage to everyone other than the ruling elite.  It is apparent that much Chinese overseas investment is driven by China’s desire to make as great a short term return as possible without regard to the long term.  Had Cardenal and Araujo concentrated on these issues and toned down the language, China’s Silent Army would have been an important addition to the literature on China’s recent development and a wake-up call to the West.

Unfortunately, a strong whiff of paranoia and conspiracy emanates from the book.  It appears to be Cardenal and Araujo’s contention that China is seeking some kind of economic world domination and that Chinese companies and expatriates are engaged in an unspoken conspiracy to “remake the world in Beijing’s image” to achieve this.  Although there is a level of state coordination of many of China’s largest corporations, this is a fanciful and slightly hysterical viewpoint.  It is true that Chinese state corporations in particular are trying hard to acquire as many natural and agricultural resources as possible and aren’t fussy as to how they do it but this is not so much a diabolical plan to subjugate the world as the necessary consequence of a rapidly growing, resource-hungry economy and the imperative to feed and satisfy a huge population so as to stave off social unrest and threats to the Communist regime.

The future of China is not the binary one expounded in China’s Silent Army.  The choice is not between Chinese world domination and the imposition of a Chinese way or the evolution of China into a Western-style economy.  Either of these might happen but so too may several other outcomes.  The recent credit crunch in China and a slowdown in growth rates are evidence enough of this.

Ultimately, China’s Secret Army is a fascinating read.  It raises many serious issues that need to be tackled both by China and its trading partners.  Unfortunately, it is marred by the prejudices of its authors and its overwrought assumptions of Beijing’s aims.  Nevertheless, it is well worth a read.  I’d like to thank Crown Publishing for sending me a review copy of China’s Silent Army.
Posted by Falaise at 4:43 PM

Email ThisBlogThis!Share to TwitterShare to FacebookShare to Pinterest
Labels: Business and Economics

Start following our signals right now and profit up to 270% per day.