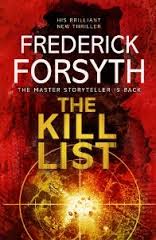 Way back when I was a lad (and, given my age, we are talking waaaay baaaack here), a new Frederick Forsyth book was a major publishing event.  During the ‘70s and ‘80s, he released a string of thrillers that were genuine blockbusters.  In particular, his first novel, The Day of the Jackal, I would submit, stands up well to almost any other thriller in the quality stakes (and is also a rare example of the film being of equal quality).  Its follow-ups, The Odessa File, The Dogs of War, The Devil’s Alternative and The Fourth Protocol were also both exciting, convincing and truly well-written.

Now I don’t know whether it was due to my changing tastes, whether the quality of his subsequent books fell off or whether the genre or, indeed, the world moved on but all his books since then have passed my consciousness by.  So when I saw The Kill List on Netgalley (and I’m grateful to Random House UK for allowing me access to it), I got slightly intrigued and thought I’d give it a try to see how I liked his more recent efforts.

And, to tell the truth, I liked it quite a bit.  I can’t say that it was life-changing or even that it will live long in my literary memory but, as light entertainment, it worked for me and I found myself picking it up in every spare moment to find out what happened next which, I suspect, is a fairly good benchmark for a thriller.

The basic premise is quite straightforward.  A spate of random suicide attacks by Muslims in the US and the UK targets prominent local citizens.  The common link between the otherwise unconnected killings is that each of the killers was a follower of a shadowy online preacher of jihad.  The Preacher (for that is the nickname given to him) soon rockets up the Kill List - the top secret list of public enemies in the US - and the order goes out from the top………….find him and kill him.

Forsyth likes using sonorous nicknames for his protagonists and the US Marine turned intelligence chief tasked with the mission is known as the Tracker.  Helped by an unlikely ally, the Tracker scrambles to unmask the terrorist and bring him down.

It’s all good, high-octane stuff and Forsyth dives into it with relish.  One of his main techniques, derived, I suspect from his background as a reporter, is to root his stories in a factual background and to use real-world figures and events to add credibility to the narrative.  Indeed, the skill with which he used this trick in The Day of the Jackal made it easy almost to believe that the events he described actually happened.  He uses the trick to good effect again in The Kill List, although its plot is inherently less plausible.

Another key Forsyth trait is the way he plays the “Brit” card.  Although, in the real world our importance has declined both in absolute terms and in terms of the security relationship with the US, Forsyth likes to play up the “special relationship” and he does so again here, giving a key role to a secret British special forces’ unit.

The film rights to the book have been snapped up and Rupert Sanders (he of Snow White and the Huntsman) has already signed on as director and I can see why - there is a real cinematic feel to the narrative and the character of the Tracker seems almost custom-made for an old school Hollywood action hero.
Look, The Kill List does exactly what it says on the tin.  It’s thrilling and action-packed, has Forsyth’s style stamped right through it and is hard-edged enough without being too gruesome or explicit for the action thriller market.  If that genre is in your wheelhouse, you’ll enjoy it; if not, you probably won’t.

Me?  I did and it has put Forsyth back into my consciousness to the extent that I will over the next few months check out some of his post-Fourth Protocol works for a spot of undemanding entertainment.  It doesn’t match up to his earliest work but, let’s face it, that set a high bar.  It is, however, good value for a few hours of escapist fun and excitement and there’s nothing wrong in that.
Posted by Falaise at 3:18 PM

If 'Afghan' detailed the terror networks themselves, Kill list focuses on the people who actually feed it the hatred it needs - the preacher (s). It begins with a code name that lands on a kill list and the subsequent man-hunt to hunt down and kill a man who feeds hatred through his oratory and takes pleasure in the drawn out death of his captives.

While threads of desert combat, HALO drops, negotiation tactics and the prevalence of pirates on the Somali coast are familiar to readers of Forsyth's other works, what sets the Kill list apart are the following : 1. This time its personal...very personal to the hero of the book 2. But for his occupation, said hero may have been an extraordinary chess player.

Usually the strategizing is left to behind-the-scenes men or the controllers but in this case, 'the Tracker' is a hybrid specimen capable of hard battle as well as superb strategizing (kind of like Mike Martin meets Nigel Irvine meets several cool gadgets and a no-holds barred budget)

That being said, one did miss the 'twist in the tale' that one expects from Forsyth...Nice read though.

(VIDEO) Get your ex CRAWLING back to you...?

Follow our signals NOW and gain up to 270% daily.