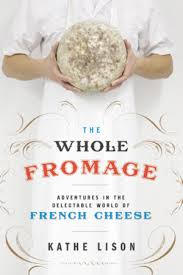 Despite it not being set in Paris, and despite it only just being still July, I’m submitting The Whole Fromage as my final Paris in July (run by Bookbath and Thyme for Tea) offering as, firstly, it’s a fascinating book and, secondly, it positively drips (or, as it’s about cheese, possibly oozes) Frenchness.

The author, Kathe Lison, is a Wisconsin-born cheese lover who decided to travel around France to try and understand its cheese obsession better.  After all, in a country with somewhere between 350-400 recognised types of cheese, this leaves plenty of scope for discovery.  Now, of course, covering even a small proportion of these cheeses would be a practical impossibility and so, sensibly, Lison restricts herself to some of the best-known cheeses, such as Camembert, Roquefort and Comté, and a few other classic types, such as various brebis (sheep’s cheese) and goat’s cheese.

Each chapter revolves around visits she makes to local cheesemakers which form the platform for her to explore the history and culture behind them (and indirectly, much of France itself) and current issues and controversies.  In particular, a constant theme is the tension between traditional artisanal manufacture and modern, technology-aided industrial manufacture.

As well as being an entertaining travelogue and an interesting record of the labour-intensive work involved in artisanal cheesemaking and the hard lives of the makers and their families, The Whole Fromage is jampacked with information about French cheeses, such as their basic classification, the processes of cheesemaking, the economics of the enterprise and the intricacies and misleading nature of the AOC system.
It is also full of interesting tit-bits of information.  For example, I didn’t know that the classic white “fleurie” skin on a Camembert is not made by native Camembert mould (which is an unattractive blue-grey) but by the same mould that creates the equivalent mould on a Brie and was introduced to make a more visually appealing cheese.

Equally, I hadn’t realised that most Camembert is now made with pasteurised milk and not raw milk and so can’t be called Camembert de Normandie.  Or that 97% of Roquefort production is carried out by a single company the Société des Caves de Roquefort which is, in turn, controlled by the largest dairy products group in the world, Lactalis, which also owns the iconic Président brand of Camembert and butter.  Intrigued by this, I carried out my own inspection of some very rustic and traditional looking cheeses in Marks and Spencer the other day and, yes, the “traditional” Camembert in its wooden box was pasteurised and not AOC (and a Lactalis brand) and the Roquefort was made by the Société.  So, if you were in the Hayle branch of M&S in Cornwall last Tuesday and saw a dishevelled and sunburnt man in shorts standing by the cheese shelves smiling and muttering oddly, that was me and this was why!

Lison;s technique is not to spend much time with foodies or chefs but to visit the actual cheesemakers and other locals.  She mixes her discussions of history, politics and culture in with her travels and, although sometimes it can feel a little mixed up, her journalistic writing style keeps the narrative moving along and stops it getting bogged down in fact.  I should also point out that Lison has a real knack for describing food and its taste and odor.

If you like cheese, want to learn more about it or just like reading about foodie travels, this is a must-read book.  The author is generous in praise for other writers on cheese such as the late Patrick Rance and I suspect that, in course of time, The Whole Fromage will be seen as a worthy addition to the cheesy canon.

On a more general note, The Whole Fromage gives a great deal of insight into the changing face of modern France.  As Charles de Gaulle pointed out, amusingly if inaccurately, “Comment voulez-vous gouverner un pays qui a deux cent quarante-six variétés de fromage?” and the gradual erosion of rural life and the tension between industry and agriculture is never far from sight in the pages of Kathe Lison’s book.  She comments accurately when discussing the EU’s maligned Common Agricultural Policy that, without its subsidies, the prices of many of France’s most artisanal and traditional cheeses would be out of reach even to the relatively wealthy consumer and would, in consequence, die out and be lost to the world.  How long some of these can survive must be in doubt.

I’d like to thank Crown Publishing for sending me a copy of The Whole Fromage for review and, if you’d like a second opinion before buying this (which you should definitely do), please pop over to the following blogs:

I'm looking forward to this book -- thanks! It will have to be a France in August post for me, though, since I haven't started reading it.

I hadn't heard of this book before, but it sounds very intriguing. I hope I can find a copy, and I expect I'll be doing some cheese inspections myself. Thanks!