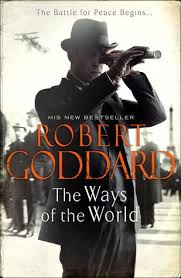 I have a longstanding fascination with the Paris peace conference that took place during 1919 following the end of the First World War, a conflict that claimed the lives of 20 million people, destroyed three empires and formed the opening chapter of the series of conflicts and struggles that were to define the 20th Century.  Delegations from both victorious and vanquished (but not Germany) set up camp in Paris as did representatives of nations and peoples all seeking land, recognition or restitution.  32 countries were present and, it’s fair to say, for a six month period, Paris became the centre of a world government as the Big Four – the leaders of the USA, Great Britain, France and Italy, essentially redrew the world map, parcelling out colonial territories and creating new nation states.  The high politics, the intrigue and the exercise of global power must have made for a heady atmosphere in one of Europe’s great cities.

Of course, it was all to end in tears with the Treaty of Versailles and its infamous war guilt clause, assigning blame for the war to Germany (and do read Sean McMeekin’s excellent July 1914 for an alternative view of events) and forcing it to pay huge reparations, thus setting up huge resentment within Germany that would prove meat and drink to Adolf Hitler in the 1930s.  There’s a wonderful description in Margaret Macmillan’s superb account of the Conference, Peacemakers, where the British and Americans try to persuade Clemenceau to soften France’s demands for reparations, fearing exactly that, but Clemenceau refusing, knowing the impact a softening would have on French public opinion.

In any event, Paris and the Peace Conference forms the backdrop to Robert Goddard’s new novel, The Ways of the World, which also forms my second entry for Paris in July, hosted by Bookbath and Thyme for Tea.

Sir Henry Maxted, a senior but fading British diplomat, is part of the British delegation, advising his political masters on issues of concern to the Brazilian government.  One day, he is found dead, seemingly having fallen from the roof of a Paris apartment.  His two sons, Ashley and James “Max” Maxted, are sent to Paris by their mother to bring back Sir Henry’s body and try to find out the cause of his death.

It soon becomes apparent that Sir Henry’s death may not show him in his best light and Ashley is happy to go along with the French and British authorities’ desire to sweep the death under the carpet so as not to disrupt the Conference.  Not so Max.  A former RFC pilot and war veteran, he is convinced that there is more to Henry’s death than meets the eye and he returns to Paris to discover the truth, risking family disfavour, official disapproval and, possibly life and limb.

I’ve not read any of Robert Goddard’s books before but The Ways of the World is an excellent read.  Goddard draws out the febrile atmosphere surrounding the Conference in full measure and uses it to create a tale where politics, espionage, love, deceit and family dynamics are all mixed to great effect.  The story moves along at a cracking pace and Goddard gives us a rich cast of American private eyes, British spies, Russian emigrés, beautiful women, French policemen and venal aristocrats.

At the centre of it all, however, is Max.  As a courageous aristocratic hero who is determined to seek the truth no matter the cost, there was a risk that Max could have come across as a bit of an anachronistic and unrealistic Richard Hannay type character.  Fortunately, Goddard is much more skilful than that and injects sufficient cynicism, hardness and sexual appetite into Max to make him both credible and interesting.  The dynamic between Max and his former batman, Sam, works, on the whole, well, although sometimes the treatment of the difference in rank jars a little, veering slightly from an old-fashioned master-servant relationship to a more modern partnership of equals.

That is a very minor criticism, however, of a great read.  Towards the end, I found myself feeling that I didn’t want the book to finish and that I hoped Goddard would use Max as a recurring hero.  I was, therefore, delighted when the book ended without the loose ends having been tied up and being set up for a sequel.  I was even more delighted when I discovered that The Ways of the World is the first in a planned trilogy.  Now, of course, I have the frustration of having to wait for the second instalment.

I’d like to thank Random House UK for allowing me to read The Ways of the World via Netgalley and, as we are, finally, in summer, would heartily recommend this as a cracking holiday read.
Posted by Falaise at 11:25 AM