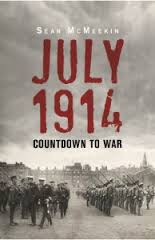 Tomorrow marks the 97th anniversary of the first day of the Battle of the Somme, one of the bloodiest and, arguably, pointless offensives of the First World War.  Following a week-long artillery bombardment, at 7:30 a.m. on 1 July 1916 the guns fell silent, the air was filled with the sound of whistles blown by officers and 11 British divisions climbed out of the their trenches and began to walk across no man’s land to the German lines.

It was a disaster of near apocalyptic proportions.  The bombardment had both warned the Germans of an impending attack and failed to knock out their defences.  Opening up with machine guns from their trenches, it was nothing short of slaughter.  By the end of the day 20,000 British troops lay dead (including almost the whole of the Newfoundland Regiment, a part of the British Army as Newfoundland had not yet joined the Canadian Confederation) and a further 40,000 had been wounded.

Over the following months, the battle descended into an attritional struggle that ended only in the November of that year.  By that time, the British had suffered 420,000 casualties, the French 195,000 and the Germans 650,000.  All this carnage resulted in a gain of only 5 miles of territory by the Allied forces.  It was a categorical failure of British military planning and tactics.

The First World War saw the birth of industrial-scale warfare, the collapse of three empires and, from a parochially British perspective, profound changes to the country’s entire social and economic make-up.  Over 16 million people (military and civilian) lost their lives and a further 20 million were wounded.  The 7 million or so civilians who died bear testimony to the birth of total war where civilians became targets as well as collateral damage.

The next few years will see the centenary of World War I and its battles, commencing next year with the 100th anniversary of the outbreak of the war on 28 July 1914, and it doesn’t take a genius to foresee a slew of new books on the subject to add to the thousands already in existence.

Getting his shot in early is respected historian Sean McMeekin with the excellent July 1914.  In this book, Professor McMeekin drills down into the month from 28th June 1914, on which Archduke Franz Ferdinand and his wife Sophie of Austria-Hungary were assassinated, to the declarations of war and, to paraphrase a British Foreign Office official, the point at which the lamps went out all over Europe.  It would take two World Wars and the collapse of the Soviet empire for them to go back on again.

When I studied World War I for my History A-level 25 years or so ago, the standard essay on the causes of the War would set out two theories and compare them.  The first theory would be the “accidental war” theory.  This would claim that, following the assassination and the rise in tensions between Russia, Serbia and Austria, a series of blunders and accidents, combined with the demands of the treaty systems then in place in Europe, led inexorably to war.  This would usually be rejected in favour of the argument that was embedded in the Treaty of Versailles, that Germany was to blame.  This view tended to centre on claims that Germany felt it was being encircled by the Triple Entente powers, that its imperial ambitions were growing and that it felt that if it delayed war for much longer than 1914 it would lose its military advantage.  I once tried to propound a theory based on economic conditions in the Balkans which was, quite rightly, laughed out of court by my teacher for being based on limited evidence which I’d also massaged.

One of the difficulties in considering the origins of the First World War is the limited reliable archival documentation that has been available to historians.  For many years, key Russian documentation lay hidden behind the Iron Curtain and the official French collection of diplomatic documents for the period is, as Professor McMeekin states, “dense farrago of distortions, omissions and lies … .”  With the benefit of increased access, July 1914 is immaculately researched and provides a new and convincing new view on the immediate causes of the War.

In the view of McMeekin, Germany was categorically not to blame, contrary to the Treaty of Versailles. Whilst accepting that the Kaiser and his key ministers made missteps (the invasion of Belgium being, in particular, a gross error), his trenchant conclusion is that, “the Germans went into it kicking and screaming as the Austrian noose snapped shut around their neck.”

In this new analysis, there is no easy culprit on whom to fix the blame.  In general terms, the political leaders of the main combatants come across as either incompetent, malign or ineffective.  Domestic concerns and local intrigues appear to play as much a role as dispassionate foreign policy demands.

There are, however, some nations to whom more opprobrium can be attached.  Much of the impetus towards a general European war seems to come from Russia, despite Tsar Nicholas’ periodic hand-wringing.  France too is seen both to conspire with Russia and to deceive and mislead it and Britain.  Austria is portrayed as being weak and incompetent and Britain as being confused as to what it really wanted.  In the end, the overwhelming impression is of the inept Brits and Germans being dragged or conned into a war conjured up by Russia, France and Austria.

July 1914 is pacily written and conveys a real sense of the inexorable movement towards war, something that I suspect is only enhanced by the reader’s knowledge of the dreadful consequences of the political and diplomatic manoeuvring.  Without sacrificing accuracy or explanation, Professor McMeekin has produced a highly readable account that, at times, reads more like a political thriller than a work of history (and I mean that as a compliment).

As I have already mentioned, the next few years will see a welter of new works on the War.  If they are even half as good as July 1914, we are in for a treat.  I'd very much like to thank Icon Books for providing me with a copy via Netgalley
Posted by Falaise at 4:56 PM

This is a period that was shamefully neglected when I was studying history, both in high school and college. I've become aware recently that I've forgotten even the little I did know, and I want to read more to learn more. This sounds like an excellent book, a good place to start.

Lisa - It's definitely an excellent book but it's very detailed on the day by day action. You may want to read a more general book first and then read this for a more detailed viewpoint.