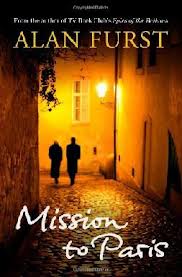 Mission to Paris is another classic Alan Furst spy novel.  Furst specialises in the immediate pre-war period in Europe, a world of shadows and threats with dark clouds of war gathering over the continent.  Into this world of moral ambiguities, Furst sends out his heroes, usually non-professional agents, to engage in espionage against the Nazi regime.

His latest hero, Frederick Stahl, is a Hollywood star, sent to Paris at the behest of his studio boss, Jack Warner, to star in a French production.  Although Austrian by birth, Stahl, at the beginning of Mission to Paris is thoroughly naturalised and comes to Paris with the intention of just oding his job, keeping quiet on the political situation and then getting back to the US as soon as he can.#
It is, however, the autumn of 1938 and there is an overriding sense that France is holding its breath in anticipation of war with Germany.  Furst is masterful in capturing the feel of this foreboding and the range of emotions felt by Parisians during this period.  From the moment of his arrival, Stahl finds himself the target of Ribbentrop’s Foreign Service and its strategy to weaken morale in France by encouraging pro-German and anti-war sentiment.

At first, wealthy and aristocratic German sympathisers in Parisian society try to inveigle and charm him into acquiescence, followed by the sudden appearance in Paris of one of Stahl’s old Austrian acquaintances.  Stahl unwisely agrees to an interview with a newspaper whose editorial policy favours appeasement and gets fooled into making some unwise statements.  It then turns nasty with Ribbentrop’s minions threatening Stahl unless he agrees to their demands.

However, the Germans had not counted on Stahl’s inherent decency and his dislike both for the Nazis and for their attempts to manipulate him.  He offers himself up to the American embassy and becomes an unofficial agent, couriering money into Berlin for an agent in place and bringing back important information on Hitler’s intentions in Poland.

For me, the joy of Furst’s writing lies in his incredible ability to evoke the atmosphere of the immediate pre-war years.  He seems to be especially at home in the Paris of this time, introducing the reader to a rich society of Eastern European emigrés, indolent parasites, corrupt businessmen and near traitorous journalists.  Indeed, by comparison, the scenes in Berlin, Hungary and North Africa seem just a touch lightweight.

Furst’s other great talent is for the creation of tension and fear as Stahl undertakes his dangerous missions and is threatened by the Nazis.  I’d caveat this slightly by making it clear that an Alan Furst novel is not a rip-roaring action-fest but a more sedate exercise with tension coming from the fear of the knock on the door or the tap on the shoulder.  One particular scene, in which one character takes surreptitious photos of top secret papers whilst the wife of a top Nazi bathes in the next room, has stuck in my mind for this reason.

Stahl himself is almost a caricature hero, being handsome and seemingly sexually irresistible (and an implausibly skilful lover) as well as morally upright and brave.  He even ends up preferring the more intellectual and more mature attractions of the emigré who acts as the film’s costume maker to the more obvious appeals of the young aristocratic Parisian, Kiki.  His status as Hollywood star also enables him to escape situations in an almost deus ex machina fashion and it is tribute to Furst that he manages to retain a sense of danger in spite of this.

Mission to Paris is not only a first rate historical espionage novel but is also a lovely period novel with 1938 Paris at its centre.  The parts of the story that describe the making of the film in which Stahl is starring is fascinating and entertaining in its own right and adds extra levels of colour to the overall piece.

I’d like to thank Random House for allowing me to read Mission to Paris via Netgalley and, as this is my third post for Paris in July, would point you towards the hosts, Bookbath and Thyme for Tea, if you’d like to find all things Parisian and French this month.
Posted by Falaise at 10:50 AM

Nice review. I keep on meaning to read more Furst - I have them all on my shelf, but have only managed to read one so far - The World At Night, which was excellent. I shall move one of his books into my bedside bookshelf, then there'll be more chance I'll get around to reading one.

I've been meaning to read this one, the settings (both Paris itself and the world of film) sound really appealing. Thanks for the reminder!

Annabel - I'm a bit the same, although I don't actually have them on my shelf. Every time I see him mentioned I think I should read more by him but then never seem to get round to it.

Lisa - it was a really good read - hope you enjoy it.

Start following our signals today & earn up to 270% a day.