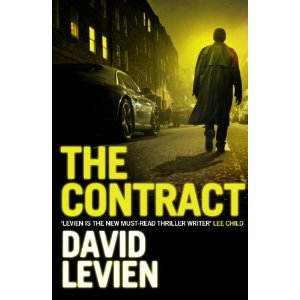 The Contract (published in the US as 13 Million Dollar Pop) is, apparently, David Levien’s third novel featuring ex-cop and PI Frank Behr. Levien is a leading Hollywood screenwriter, with an impressive list of credits and nominations for Edgar, Hammett and Shamus awards for his writing so, when I was sent a copy for review by Transworld, I was happy to give it a try.

In this instalment, Behr is newly-employed at Caro, a prestigious investigation firm and is about to become a father again.  Finding himself acting as a stand-in bodyguard for a wealthy local businessman, he ends up saving his client’s life from a hitman in an underground garage.

Despite being hailed as a hero at work, Frank is surprised when the police investigation appears to be given a very low priority, especially as his client has just been nominated to take over a Senate seat vacated by its incumbent.  As this is a thriller, Frank ignores the wishes of his employer and heavy hints from the police and begins to investigate, ignoring his official case load.

What Frank doesn’t know is that the attempted assassination has been arranged by Waddy Dwyer, a sociopathic Welsh hitman and former special forces soldier.  Dwyer will stop at nothing to clean up the mess and, in particular, collect more money from the man who asked for the hit to be made.  The two are set on a collision course that will lead to an explosive climax, leaving corpses and broken dreams along the way.

The first thing to say about The Contract is that it pretty much does what it says on the tin.  It’s a solid, workaday thriller, with some good set pieces and tense moments and a couple of satisfyingly nasty villains.  Levien throws in a couple of interesting sub-plots and, to counterpoint Frank’s maverick and dangerous investigation, we get to follow his partner, Susan, her pregnancy and her desire for a more stable and normal life with Frank.  Anyone who likes action thrillers can pick this off the shelves in the bookshop and know that they won’t be disappointed.

But that’s about where it ends.  The flip side to The Contract being a solid, workaday thriller is, I’m afraid just that.  There’s nothing that really lifts it out of the ordinary.  I found it difficult to engage with Frank Behr as a conflicted hero, which is the way he is drawn, as he himself seemed a bit too unemotional.  Maybe I’m missing something because I’m not familiar with the backstory and haven’t followed him through the first two books in the series but, although he appeared to be aware of the consequences of disobeying his boss and running up against the police investigation, he didn’t seem to feel any more than a fleeting hesitation in doing so. I just didn’t get the sense that he was all that torn.  In fact, at times, he comes across as being a bit selfish in failing to take Susan’s needs into consideration.  There is definite potential in the set-up but Levien doesn’t quite hit the mark.  Suffice it to say that during the climax to the book, I actually wasn’t really bothered whether Frank lived or died, which is not a good way to feel about the hero.

The other issue I had with The Contract relates to the two villains, Waddy Dwyer and his sidekick Ricky Powell, an English former soldier.  Although they are suitably scary and psychotic and, in that sense, decent bad guys for this kind of novel, Levien hasn’t quite got the hang of how British people speak or, indeed, the differences between how the English and Welsh speak.  There are some awkward and clumsy efforts at dealing with this but the characters end up sounding like a mash-up of British and American speech patterns, mixed in with some references that feel like they’ve been grabbed from a hasty trawl through a thesaurus to create an impression of Britishness.  For example, at one point, one of them makes a comment that another character is like a “National Peace Scout”, whereas anyone from the would refer to a “Boy Scout”.  I appreciate that this is a minor quibble but it detracted from two otherwise decent characters.

Overall, though, this is a decent, but not an excellent, action thriller which would definitely help a thriller fan while away a few hours.  I’m not sure, however, that it would tempt a non-fan into the genre and I can’t say that I will be rushing to buy any of David Levien’s other books.

Excellent blog, good mission! I hope your read books will be much more than your plans...
I hope you'll like a suggestion of mine: using sites like zazzle.com, cafepress. com, fiverr? They could be a good way to promote your blog/works and to help "remove" stupidity in the streets like headlines on t-shirts, fridge-magnets, cups, etc: My Boyfriend kisses Better Than Yours, FBI - female body inspector, etc. Not everything we see and think of should be about sex, right? It would be much better if there were more nice pictures of mythical creatures, good thoughts, poems from fantasy genre, etc? I'm allanbard there, I use some of my illustrations, thoughts, poems from my books (like: One can fight money only with money, One of the greatest delusions of mankind is that humans are superior to animals, Even in the hottest fire there's a bit of water, or
Love and happiness will be around,
as all the chains will disappear,
and Mountaineers will climb their mount
and there won't be any tear!
etc). I guess such lines look and sound much better than the usual we see every day? Best wishes! Good luck with your efforts! Let the wonderful noise of the sea always sounds in your ears! (a greeting of the water dragons' hunters - my Tale Of The Rock Pieces).

Start following our trades NOW & earn up to 270% per day.