2,507: Nazi Literature in the Americas by Roberto Bolaño 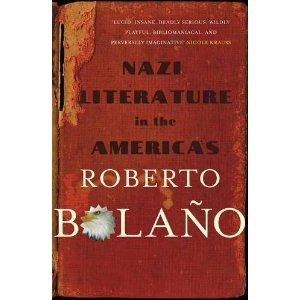 There are very few people who can claim to have lived twice.  Indeed, only Jesus, Lazarus and, at least according to Fleming’s title, James Bond spring to mind.  But in a literary sense, it would appear that Roberto Bolaño could be added to that list, having emerged into the consciousness of Anglophone readers only after his death in 2003.
Nazi Literature in the Americas was, in fact, one of his earlier works, although Chris Andrews’ wonderful translation appeared after the translations of several of his later and more well-known works.  It is actually the first piece by Bolaño that I have read and I have a sneaky suspicion that I would have been better off attempting either The Savage Detectives or 2666 first so as to be able to set this in better context.
I’m not even sure whether it is correct or fair to describe Nazi Literature of the Americas as a novel as it consists of around 30 mini-biographies of fictional American literary figures, all of whom are linked by extreme right-wing beliefs.  The book is structured as a mock-academic literary gazetteer, complete with a glossary of minor figures referred to in the text and a bibliography of the works of his fictional subjects.
On the surface, then, this all looks like a clever literary joke or game.  The individual entries are written in a seemingly disinterested manner by a narrator with a dry, waspish sense of humour.  The counterpointing of straightforward biographical narrative with almost throwaway comments about the bizarre and often repellent ideas or character traits of his subjects serves to highlight both their outlandish personal and political beliefs – “ [he] advocated, among other things, the re-establishment of the Inquisition; corporal punishment in public; a permanent war against the Chileans” – and some of the self-referential and pretentious views on writing and art that can be held by avant-garde or minor literary figures.
Bolaño is highly inventive in the characteristics he gives to his fictional writers.  They vary from leaders of Buenos Aires football gangs to Chilean military pilots and junta killers and from a Haitian journalist who plagiarises French poets to a science fiction writer who was “the creator of the Gunther O’Connell saga, of the Fourth Reich saga, and of the saga of Gunther O’Connell and the Fourth Reich, in which the previous two sagas fuse into one.”   They range from talentless individuals to figures of real genius and stretch over different geographies, times and social classes, linked only by a certain world view and an obsession with writing and, in particular, poetry.  There is a pleasing whiff of the Daily Telegraph obituary column about it, with its collection of oddball characters and the sometimes euphemistic, sometimes gently mocking tone of the narrator.
If this were all there was to Nazi Literature in the Americas, however, it would be a joke dragged out too far, and one with an odd coda, as the last story – of Carlos Ramirez Hoffmann, a Chilean pilot and serial killer who becomes one of Pinochet’s death squad killers – has a very different tone and even a change of narrative point of view.  Indeed, Alberto Mangel’s review in the Guardian dismisses it as such and he is generally scathing about the book and of much of Bolaño’s other work.
Bolaño, however, has other ideas.  As well as teasing the Latin American literary world for its pretensions and self-importance, he also makes us address questions relating to the link between literature and political philosophy.  Some of the characters he creates are actually likeable or sympathetic until we recall their views.  Some of them are drawn as genuinely talented.  Can we divorce our enjoyment of a writer’s work from his or her political views?  Can we divide a writer’s character from their books?
Looking from the other side of the glass, he also brings to our attention the willingness of many authors to turn a blind eye to repression, to co-habit with it to avoid suppression or even to embrace it enthusiastically.  And, make no mistake.  Bolaño may use the Right as his vehicle but change “right” for “left” or “fascist” for “socialist” and the same would hold true. Their may be particular resonance for this viewpoint in the context of Latin America in the late 20th Century but it is also a general point.
And Bolaño is not setting himself up as an occupant of the moral high ground here.  There are plenty of instances in the book of empathy and even sympathy from the narrator for his subject.  His creations persist with their lunatic theories and deranged books even when times have moved on and they are reduced to voices crying out in the wilderness.  I think Bolaño can understand the lure of complicity and the compulsion to write in his characters.
I prefer this reading of the book to Mangel’s dismissal of it, although his critical function is considerably greater than mine!  As I wrote above, however, this is my first Bolaño and it may be that I would view this differently if I were more familiar with him and his work.
One final point: there are numerous references to real literary personages and, in particular, Latin American figures.  I’m pretty ignorant on this and so I would imagine that if you have a working knowledge of the Latin American literary scene, you may well get much more of Bolaño’s wit.
Posted by Falaise at 1:51 PM

Nice review - pretty much in agreement with my own.
http://theknockingshop.blogspot.com/2011/10/nazi-literature-in-americas.html
You've plenty of treats ahead of you reading Bolano.

What a fascinating idea! I actually thought this was non-fiction at first. So there's not an actual plot?

Seamus - I've just read your post on this. Great stuff.

Alex - nope, no plot at all, just some threads that hold the sketches together.