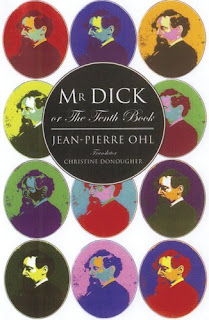 When Charles Dickens died in June 1870, he left behind him the unfinished Mystery of Edwin Drood (or the MED, as fans are, apparently prone to refer to it).  Ever since then, frequent attempts to uncover the murderer of the mysterious disappeared title character have been made, both by contemporaries or near-contemporaries of Dickens or by more modern authors either in scholarly papers or in novel form.
Mr Dick or The Tenth Book is French debut author Jean-Pierre Ohl’s contribution to Droodiana and was awarded a number of French literary prizes before being translated into English by Christine Donougher.
Ohl’s main narrator is François Daumal, a Frenchman who, following the collapse of his parents’ marriage goes to live with his mother and maternal grandmother in a small French town.  One day he discovers the key to the attic of the house and enters the room in which his late grandfather had become a recluse before his death.  Daumal finds that the room is filled with badly bound books that his grandfather had collected and, whilst browsing, comes across a copy of Dickens’ David Copperfield which captivates him.
Daumal quickly develops an obsession with Dickens which leads him to become friend and then bitter rival with Michel Mangematin, a fellow student at the university in .  The two are fascinated by the unfinished MED and the lust to uncover the true conclusion drives both their lives in very different directions until the truth is revealed and lives and even identities are broken.
In truth, the very generalised synopsis I’ve just written (which is deliberately vague so as not to spoil the book for any of you who wish to read it) could equally lend itself to a run-of-the-mill pot-boiler. Instead, Ohl’s book is a very post-modern construct, in which the lines of reality and fantasy are blurred and which contains some marvellous mock scholarship.  The ending, in particular, featuring a party at a replica of Gad’s Hill Place, at which the attendees dress as characters from Dickens' novels and which Daumal describes whilst in a drunken state, verges on the surreal.  A standard "who killed Edwin Drood?" novel this ain't.
There’s a Russian doll feel to Mr Dick as Ohl uses the technique of intertextuality to gradually draw together the various plot strands to the climax of the story.  At the core is the narrative of Daumal but this is interwoven with the journal of one Évariste Borel, supposedly a former protégé of George Sand, who tells of his visit to Dickens at Gad’s Hill Place shortly before the latter’s death, and an account by Arthur Conan Doyle (yes, that one) of his first attendance at a séance, at which the participants try to discover Dickens’ intentions for the MED.
Ohl also gives the book undertones of Dickens’ writing, despite the plot being set in the 20th Century.  Many of the characters are as baroque and unusual as those of Dickens, like Daumal’s sadistic grandmother, Sitting-Pretty, and the strange bookseller, Krook, who sits almost at the centre of Ohl’s narrative web in a bookshop that is hugely redolent of a Dickensian location.  There is even an echo of a key Dickens theme in the impoverished childhood of Daumal and his struggles to make a way for himself in life.
The book also takes a few swipes at the French literary preference for elegance and form over the cruder, bawdier but, arguably more vivid approach taken by Dickens.  Ohl has said in interviews that Dickens is viewed in as little more than a children’s author by comparison to French figures such as Flaubert – a view Ohl himself disagrees with.
Mr Dick is a novel that requires the reader to concentrate and to think.  It is uneven in parts and the final few chapters seem a little rushed and confused but it is a rewarding and entertaining read.  I suspect that readers with some knowledge of Dickens will get more out of it than someone with no knowledge (although I will admit to not having read the MED) and, if post-modernism aggravates you, this may not be to your taste but otherwise, I would recommend it, especially in this bicentenary of Dickens’ birth.  It has piqued my interest in the MED  and its derivative sub-culture.
Posted by Falaise at 4:39 PM

Isn't a MED adaptation playing on BBC now? Didn't know about all the mystery around it.

I wasn't aware of that, Alex. I'll have to have a look.

If you are looking for a reputable contextual ad company, I recommend that you check out Clicksor.