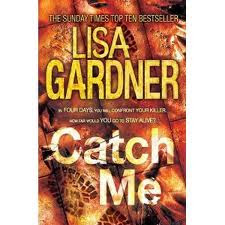 I should probably preface this post by confessing that, had I not been kindly sent a review copy of Catch Me by Lisa Gardner by its publisher, Headline, I would not have bought or read this book.  Although I read a lot of crime fiction, I tend to be rather picky in my selections – not in terms of quality, I hasten to add, but more in the kind of books in the genre that pique my interest – and  police procedurals (even ones with a strong suspense element such as this) set in the modern day just don’t tend to jump off the shelf for me.  Nevertheless, as part of the point of this blog is to encourage me to break out of my self-imposed reading habits, I decided to give it a go.

Catch Me follows two separate investigations by Boston Sergeant Detective D.D. Warren and her unit.  The first involves a young woman, Charlene Grant, who was a victim of appalling abuse by her mother as a child, which has left her deeply damaged.  On January 21st in each of the previous two years, one of Charlene’s two closest childhood friends has been murdered in their own homes, with no signs of forced entry and no signs of a struggle.  It is now 17th January and Charlene approaches D.D.  to explain that she believes that she only has four days left to live.  In the interim, Charlene has trained herself to fight and to survive.

D.D. is intrigued by the young woman and begins to dig into her past, uncovering Charlene’s secrets.  Soon it becomes apparent that Charlene may be more than a potential victim as she becomes the prime suspect in D.D’s second investigation, that of a series of murders of paedophiles in Boston.

Given that this isn’t my usual type of crime novel, I initially became even more doubtful as the book opened with a description of Charlene’s childhood abuse, followed immediately by the introduction of the paedophilia theme.  I may well be a bit of a wuss but ever since the birth of mini-Falaise, I have found those kinds of theme upsetting in literature.

Slowly but surely, though, the story began to grip me until I was totally hooked and it turned into one of those books I both wanted to end so I could discover the identity of the murderer but also didn’t want to end as I was enjoying it so much.

Gardner’s great strength is her ability to create a sense of suspense and build it up through the book, using some clever twists and plot devices to keep the reader off balance and heighten the uncertainty.  She also very cleverly dangled a number of plausible solutions before (and please excuse the mixed imagery here) pulling the rug from under the reader and supplying a wholly-unexpected, yet totally logical explanation.

I’d also highlight the sub-plot involving the Internet grooming of Jesse, the young son of a single mother, by a paedophile.  Not only did it have me mentally screaming, “NO! Don’t do it!” on several occasions but it also had me seriously contemplating getting rid of every Internet-enabled item in the Falaise household to try and keep mini-Falaise completely wrapped up in cotton wool.

This is Gardner’s fourteenth novel, five of which feature D.D. Warren.  Nevertheless, it never felt anything other than a complete, stand-alone novel even though there were scenes focusing on Warren’s personal life and new motherhood and the relationships between her and the members of the unit which were clearly the development of the character arc from earlier in the series.

Fans of this kind of combo procedural and suspense thriller will thoroughly enjoy this story and it was gripping enough to keep a more casual reader of this type of book engaged with it.  From being just another name on the shelves of the crime section of the bookshop, Lisa Gardner is now someone definitely on my radar for further investigation.
Posted by Falaise at 12:17 PM

Did you know that you can create short links with BCVC and get $$$$ from every visit to your shortened links.

Start following our signals NOW & gain up to 270% per day.