2,588: A Highland Christmas by MC Beaton 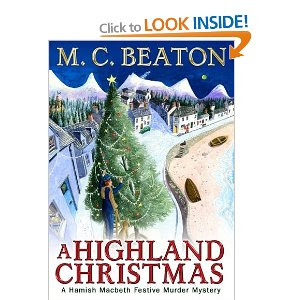 What do MC Beaton, Marion Chesney, Jennie Tremaine, Sarah Chester, Helen Crampton, Ann Fairfax, Marion Gibbons and Charlotte Ward all have in common?  It’s a bit of a trick question actually because the answer is that they are one and the same person.  Marion Chesney is a prolific author who has published books under each of the above names.  I’ve managed to count over 100 books by her in her various guises but I strongly suspect there are more.

Her two best known series of works are probably the Agatha Raisin and Hamish Macbeth crime novels, both written under the pseudonym of MC Beaton.  There are over twenty volumes in each of these series and Hamish Macbeth was adapted into a long-running TV series in the .

A Highland Christmas features PC Hamish Macbeth, a policeman in the small Highland town of . Christmas in Lochdubh is not a particularly jolly event due to the influence of the Calvinists in its midst. Considering much of the Christmas ritual to be pagan and ungodly, they have prevented Lochdubh from having a Christmas tree or any decorations, even though the sourpusses of nearby Cnothan will be having them.

Into this rather dull Christmastime comes all-round good guy Hamish Macbeth.  In the course of the 166 pages of A Highland Christmas, Hamish manages to solve the mystery of the theft of Cnothan’s Christmas tree and lights, recover Smokey the cat, thwart his nemesis, DCI Blair, organise a Christmas party in an old people’s home and arrange for Christmas to come to Lochdubh after all. Not bad for a couple of days work.

You will, I am sure, have noticed that there has been no mention of murder, rape, armed robbery or any other serious crime in that short synopsis of A Highland Christmas.  This is about as cozy as a cozy mystery can get.  “Cozies” are, basically, reinventions of the classic Golden Age whodunits which largely eschew violence, sex and other unpleasantnesses and A Highland Christmas takes this to extremes by almost foregoing crime altogether.  Frankly, it is so cozy, it should come with a free cardigan, pair of slippers and cup of cocoa.

As you will have gathered, A Highland Christmas is not a demanding read.  The plot is not complicated, the writing is straightforward and there are no deep ideas or themes to contemplate.  There is some sly humour, having a little dig at the po-faced Calvinists of Scotland and at some of the parochial elements of rural life and there is a real sense of atmosphere to the story.

Ultimately, A Highland Christmas is a bit like a literary chocolate bar.  It is quickly consumed, sweet and comforting and easily forgotten.  I am sure that, merely by reading this post, you will know exactly whether it is something you would fancy reading.  I wouldn’t have read it  but for its Christmas theme, I probably wouldn’t read more MC Beaton but, you know what, I actually quite enjoyed it.  It was happy and that’s part of what Christmas is about.

Next up, we revive the Auld Alliance by travelling from to for Immoveable Feast, A Paris Christmas by John Baxter.

"A literary chocolate bar. It is quickly consumed, sweet and comforting and easily forgotten." What an excellent line!