2,581: A Christmas Carol by Charles Dickens 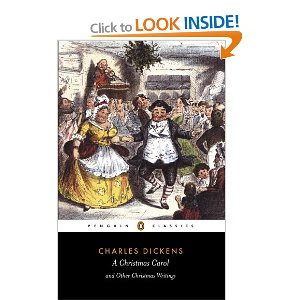 “Marley was dead: to begin with”.  That may well be true but his ghost, along with Scrooge, Bob Cratchitt and Tiny Tim live on in the pages of A Christmas Carol.  I suspect it is the best known of all Christmas stories (other than the original Christmas story obviously) and the book has never been out of print since its publication in 1843.

It is a phenomenon and has been adapted into films, TV shows, opera, theatrical productions, musicals and even a mime show on the BBC, featuring Marcel Marceau.  This Christmas, it will even form the basis of the Doctor Who Christmas special.  Everyone who is anyone in popular culture seems to have had a go at it, from Patrick Stewart to Albert Finney, Kermit the Frog to Barbie and from Fred Flintstone to Bugs Bunny.  As well as more or less faithful versions, it has also been subject to parody and pastiche in productions like Blackadder’s Christmas Carol, Scrooged, A Klingon Christmas Carol and I Am Scrooge: A Zombie Story for Christmas.
But A Christmas Carol is not just a source of employment for actors and inspiration for writers.  It popularised the use of the greeting “Merry Christmas” and gave the English language the word “Scrooge” and the phrase “Bah Humbug!”.  More significantly, as historians such as Ronald Hutton have argued, it has also been a fundamental factor in the secularisation of Christmas and a catalyst for the way in which we celebrate it today.
Prior to the middle of the 19th Century, the way in which Christmas in England and the Anglo-Saxon world had been celebrated was largely a communal celebration based around the church.  This had been the case since the Cromwellian period in the 17th Century but observance of the festival had dwindled by Dickens’ time.  The middle of the 19th Century saw a revival of interest in Christmas celebrations, driven partly by the introduction of Christmas rituals such as the tree and the Christmas card but also by the immediate critical success of A Christmas Carol.
Influenced by memories of his childhood and his distaste for the recently promulgated Poor Laws, Dickens created a tale which emphasised the family side of Christmas, the desirability of generosity to the poor and the happiness to be found in celebration.  The classic conservative concept of “noblesse oblige” or the need for the fortunate to look after those who are less well-off pervades the story, with the implied threat that those who fail to heed the lessons of the three Spirits of Christmas will meet a cold and horrible fate.  It is very much a secular work, with elements of the supernatural present but remarkably little mention of religion.  It is one of those books that has changed the way we actually live.
For Dickens haters or those who are intimidated by his longer works, this is an ideal introduction.  It is not considered one of his greatest works from a literary perspective but it is highly readable, especially given the familiarity of its plot. Oddly enough, this is the first time I have actually read it.  As a child and a young man, I was not really gripped by the story and I’m pretty sure I have never even watched a film or TV version all the way through (which shows how pervasive it is as I knew the plot in detail).  I now regret not having read it sooner as I thoroughly enjoyed it.  I suspect it would be a great way to introduce younger readers into Dickens or even Victorian literature in general.
With one more sleep until Christmas Eve, I have one more post to do.  Tomorrow’s post will be on a most appropriate book for that very special day.
Posted by Falaise at 10:13 AM

I´ve never read it, but propably saw every movie adaptation and spin-off ever made.

I knew the book had an impact, but not as much as that! No one ever thinks of The Christmas Carols as part of the "Books that changed the World" lists :)

I read this years ago and it's amazing to think of the huge influence one writer had on an international holiday. Words are powerful!

Thanks for the comments. I hadn't realised the extent of it's impact either until I wrote this post.

I hadn't realized the extent of it's influence either till I read Ronald Hutton's account.....
which inspired my machinima version of A Christmas Carol
http://www.youtube.com/watch?v=S9SBebs3A5I