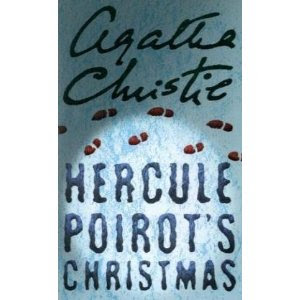 It is Christmas Eve.  Simeon Lee, an aged merchant-adventurer who has made a fortune in South America, has invited his family to spend Christmas with him.  Amongst his guests are his loyal children, Alfred and George, a mysterious long-lost granddaughter, Pilar, Stephen Farr, the son of Simeon’s former business partner and Harry, the black sheep of the family.  The atmosphere is tense, mistrust is rife.

It is late at night.  A crashing of furniture.  A loud and terrible scream.  Everyone gathers at Simeon’s door.  It is locked.  When the men break it down, a horrifying scene greets them.  Simeon is dead, lying in a pool of blood.  Who could have killed him? How could the murderer have killed him behind a locked door?  Superintendant Sugden is baffled.  Hercule Poirot is called in to investigate.  And so Hercule Poirot’s Christmas begins.

This is a classic Christie.  There is a closed group of suspects, almost all of whom have a motive for murder.  There are imposters, mistreated family members and the murderer, who is the last person we suspect, is unmasked by Poirot in a splendid reveal scene.   Criticisms?  Well, there is a little bit more coincidence than one would generally want, even by Christie’s standards and, arguably, she breaks one of the key conventions of locked room mysteries.  Poirot, also, is not as compelling a character as he is when playing off Hastings or Chief Inspector Japp.  But, so what.  This is Agatha Christie.  This is Poirot.  If you like them, you will like this and if you don’t, you won’t.  Simple.

It’s also fair to say that it is not particularly Christmassy and could have been set at any time of the year.  There is a much more atmospheric Poirot short – the Mystery of the Christmas Pudding, which could only have been set during the holidays and which positively oozes Christmas.

Now I do like Poirot.  I’ve liked him since I was about ten years old.  Poirot always reminds me of family summer holidays in Dorset and Cornwall when my father would buy me copies of Poirot short stories and I would sit on the beach or by the pool, devouring both them and ice creams.  He also reminds me of Christmas, when there would often be a volume or two as part of my present haul.  I still love him now, thirty years on, and a Poirot short story is a guaranteed relexant.

I know this isn’t literary brilliance.  I know that, even as detective stories, they are lacking in real quality by comparison with many more modern and complex mysteries.  But I love them and I don’t care what anyone else thinks.  And, I will be settling down on Christmas night to watch David Suchet’s new version of Murder on the Orient Express, my favourite Poirot novel.  Can’t wait.

Tomorrow, a brief foray into non-fiction – Can Reindeers Fly? by Roger Highfield.