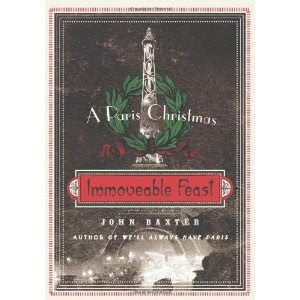 One of the most comforting things about Christmas is the familiarity of it all.  Many of us have grown up with a set of customs and rituals that are repeated Christmas after Christmas.  Whether it is the way in which our presents are delivered, the snacks that are left out for Santa Claus and Rudolph or the family trek to Midnight Mass, Christmas wouldn’t be Christmas without them.  And Christmas lunch is one of the most ritualised meals of them all.  The British roast turkey and trimmings followed by Christmas pudding, the Australian Christmas barbecue or the Central European goose, they are all hallowed by tradition and one messes with them at one’s peril.

So what happens when one gets married?  Do we create new rituals, blend two different sets or try and find compromises?  And is it even more difficult when one marries into a different culture?

James Baxter, an Australian writer, journalist and film maker confronted this very issue when he moved from Los Angeles to Paris to live with his Parisian girlfriend, whom he later married.  Not only did he have to cope with adapting to French life but he also did the unthinkable by taking over responsibility for cooking Christmas dinner for his new extended French family.

An Immoveable Feast is Baxter’s third volume of autobiography, following on from A Pound of Paper: Confessions of a Book Addict and We’ll Always Have Paris: Sex and Love in the City of Lights.  It tells the story of his family life in France, based around preparations for his Christmas dinner and how he is trying to impress his family by introducing new dishes to the meal without moving too far away from the kind of repast that French culinary tradition would demand at Christmas.  Let’s just say that he serves up Cajun spit roast suckling pig.

An Immoveable Feast is an easy and inoffensive read.  There’s the requisite amount of gastro-porny description of French food and the sourcing of his dinner and sufficient Parisian atmosphere to create the sense of the different that the “foreigner living abroad” genre of books would require.  Ultimately, however, it is a little bit “meh”, a little bit insubstantial and a little bit pointless.  I suspect part of my reaction may be because I hadn’t realised that it was a volume of autobiography as well as a book about food.  I’m not a big fan of memoirs by “ordinary” people.  If I am reading biography or autobiography, I tend to need it to be about someone of real significance in their field.  I am not criticising Baxter here, I appreciate that he is a successful writer and probably a very nice chap, it’s just that I’m not that interested in his story.

I am, however, very interested in food (Mrs Falaise would say, too interested) and food writing.  And therein lies the nub.  There was not enough about the food or about French Christmas eating habits and rather too much about how his family and how he learned to cook as a young man in Australia to impress the girls.  It doesn’t make it a bad book, just not quite what I thought I was getting.

I don’t know if I would have had a different reaction to it if I had read his other autobiographical pieces first or if I had come to the book with different expectations but I didn’t really connect with it.  It would pass a couple of harmless hours but, in all honesty, there are many other books that would do the job better and leave more of an impression, at least in my opinion.

As for tomorrow’s post, well you’d better watch out, you’d better beware, ‘cos Terry Pratchett’s Hogfather is coming to town.

Email ThisBlogThis!Share to TwitterShare to FacebookShare to Pinterest
Labels: Food and Drink, Twelve Days of Christmas