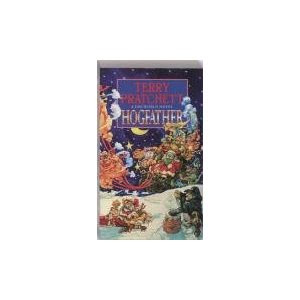 ‘Tis the night before Hogswatch and all through Ankh-Morporkh children are getting ready for the visit of the Hogfather by leaving out a pork pie for the man himself and turnips for his flying pigs.  They have written their letters and a few lucky (or unlucky) ones have even seen him at Crumley’s department store.  Presents are expected to be delivered.  But this will be no ordinary Hogswatch Night.

Hogfather is the twentieth Discworld novel by Terry Pratchett and features many of the key characters from the cycle – Death, Albert, Archchancellor Ridcully, Constable Nobby Nobbs and several others.  The plot is as follows: the Auditors have decided that the Hogfather does not fit into their concept of the Discworld and have commissioned the Guild of Assassins to eliminate him.  Death has spotted his disappearance and is filling in for the night, with a decidedly disgruntled Albert as chief pixie and some unexpected consequencces.  Meanwhile, he has lured his grand-daughter, Susan Sto-Helit, into investigating the Hogfather’s absence and, as a side issue, the sudden appearances of, amongst others, the Oh God of Hangovers, the Verucca Fairy and the Eater of Socks.  I don’t want to drop any spoilers but, suffice it to say, there is a happy ending for almost all and the children will get their presents after all.

All of Pratchett’s hallmark traits are present and correct here.  There are extensive footnotes which carry the story forward, puns and allusions galore and extremely sharp insights and commentary on our world, all hidden in his wonderful fantasy world.  As with many of his best works, Hogfather is a parody of a subject in our world, in this case, obviously, the story of Santa Claus.

The reason I love the Discworld books is that they are, on the surface, comic fantasy stories but, in reality, are witty, often satirical commentaries on life and human behaviour.  Pratchett himself has criticised the view that the science fiction and fantasy genres are somehow less worthwhile than other fictional genres and, in my view, his own work would support that criticism.  They are simply joyful, with hilarious comedy disguising the serious and, sometimes even profound points he makes.  And if all that seems a bit over the top, the Discworld books are also damn good reads.

One final point I’d make about Pratchett for the uninitiated is that the Discworld series shows very clearly how Pratchett’s writing style and ideas have developed over time.  In short, the more recent books in the series are, for me at any rate, more sophisticated and sharp than the earlier books which can tend towards the merely comic.  Obviously, I would highly recommend most of his books (although I found Small Gods and Moving Pictures to be a little ho-hum).

Terry Pratchett is currently suffering the early stages of Alzheimer's Disease and it is probable that there will be few more Discworld novels and it is remarkable to consider that he has managed to produce several books since the diagnosis of this terrible disease was made.  It is sad to think that there will, in all probability, be few more of them to come.

I’m afraid that with Christmas looming ever closer and the list of pre-Christmas jobs not getting any shorter, this is a much more abbreviated post than originally intended.  Nevertheless, I will be back  tomorrow with a Christmas ghost story, the Shepherd by Frederick Forsythe.

Follow our signals NOW and gain up to 270% daily.

I have a fancy for your posts and I think they are very good. I can make full use of them to handle with some problems in my life. Articles seems to be written well, so they are easy to understand. Thank you for your sharing.
This is very interesting, You’re a very skilled blogger. I’ve joined your rss feed and look forward to seeking more of your magnificent post. Also, I’ve shared your website on my social networks!
Abcya games to play right now
friv com only the best online games Jogos juegos
https://frivland.blogspot.com/2021/07/hand-spinner-spin-and-stay-in-ring-as.html