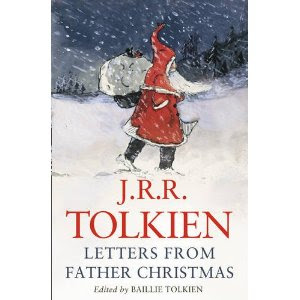 Wot, no hobbits?   Outrageous!  Shouldn’t be allowed!  To be honest, hobbits probably wouldn’t fit in too well at the North Pole.  Fortunately for Tolkien and for us, there are a number of other animals and creatures that can and do exist happily at Father Christmas’ house.
J.R.R. Tolkien’s children, like many other kids, wrote a letter to Father Christmas every year.  Unlike most children, they received a letter back.  Unlike virtually every other child, the author of those replies was one the best-selling fiction writers of all time.
The Father Christmas Letters is a collection of the letters that Tolkien wrote to his children every Christmas from 1920 to 1943 in the guise of Santa Claus.  There would also be a hand-drawn colour picture with the letter, depicting life and events at Cliff House, Father Christmas’s house at the North Pole.  The book itself is beautifully presented and, as well as a full text version of the letters, also contains many colour plates of the original letters and drawings.  As well as a literary treat, it is also a joy to look at.
In the early letters, Father Christmas’ main companion is the North Polar Bear (or NPB) who is clumsy and who provides most of the comic content of the letters, even taking over some of the writing duties at times.  As time passes, they are joined by a cast of characters including NPB’s mischievous cousins, Paksu and Valkotuuka, who come for a visit and never leave.  There are elves, cave bears and wicked goblins who even attack Father Christmas’s home.  In 1936, he engages a secretary, Ilbereth, who becomes a third writer of the letters.
There is no consistent plot to the letters but they contain plenty of funny stories about life at the North Pole.  We get to find out how the NPB climbed the North Pole and snapped it, how the goblins (who live in the caves beneath Cliff House) start a war with the Elves and what happened when the NPB was allowed to decorate the Christmas tree.
Although the Father Christmas Letters do not form part of the Middle Earth canon, there are plenty of early hints for Tolkien aficionados of elements that would later appear.  Ilbereth is an early incarnation of Elbereth, the Elven queen, the elf-goblin war presages the Middle Earth elf-goblin wars and the letters clearly show the fully-developed elven script that is seen in the Lord of the Rings.
The letters also give us an insight into Tolkien’s mind and life.  There are numerous creative reasons why the Tolkien children would not be receiving the more expensive gifts they had asked for, highlighting the paucity of his remuneration as an academic.  There are also darker undertones to some of the letters, hinting at Tolkien’s frequent illnesses and more general worry at outside events as the dark clouds of the 1930s gather across Europe.  There are also references to Tolkien’s professional and personal interest in languages and orthography: “He can write several alphabets now – Arctic, Latin (that is ordinary European like you use), Greek, Russian, Runes and, of course, Elvish.”  There is also a reference to the Hobbit and how Father Christmas is sending lots of copies of it to children.
The letters end in 1943 with a poignant letter to Priscilla, his youngest.  Tolkien’s eldest two sons were both serving in the Army during the Second World War and Priscilla was getting older.  Father Christmas wrote:
“I suppose you will be hanging up your stocking just one more time: I hope so for I still have a few little things for you.  After this I shall have to say “goodbye”, more or less.................My messengers tell me that people call it “grim” this year.  I think they mean miserable: and so it is, I fear, in very many places where I was specially fond of going.”
The letter was accompanied by a simple picture of a cold, dark sky.
I think this is a book that can be enjoyed both by children and by adults, especially those who are Tolkien fans.  There is also an excellent CD recording of it.
Tomorrow, the greatest Christmas book of them all – A Christmas Carol by Charles Dickens.
Posted by Falaise at 10:32 AM

How have I never read this? Definitely going on my Christmas list.

It's a lovely little book. The facsimile extracts of the letters and drawings are worth the price on their own. Apparently, there is an audiobook version with Derek Jacobi narrating which is supposed to be wonderful too.

If you are looking for an excellent contextual advertising network, I recommend you take a look at Chitika.

Start following our signals right now and earn up to 270% a day.

It's been said that every bettor needs to see this,

Watch this or quit betting on sports...