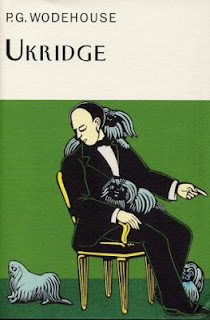 Stanley Featherstone (pronounced “Fanshawe”) Ukridge is not the first Wodehouse character who would spring to the mind of a casual reader but he is one of the minor Wodehousian protagonists, like Uncle Fred, whom I count as a secret pleasure.  Other than Love Among the Chickens, Ukridge is a denizen of Wodehouse’s short stories, appearing in nineteen of them over the years, of which ten constitute Ukridge.

For those of you unfamiliar with him, Ukridge is a large, untidy kind of fellow who is forever scheming to make his fortune in a variety of improbable manners, without having to go to the inconvenience of actually doing any real work.  Whilst waiting for his plans to come to fruition, he survives by sponging off his redoubtable Aunt Julia, a novelist, and various long-suffering friends, notably Jimmy Corcoran, the narrator of the stories in Ukridge, and George Tupper, a well-meaning, if too earnest, member of the Foreign Office.

Ukridge seems both to annoy and charm his social circle in equal measures and, despite his friends knowing full well that he is both impecunious and a bit of a blagger, he never fails to persuade at least one of them to pay for supper or to invest in his latest scheme.  He floats through life with sunny optimism, interspersed with disappointment as his best laid plans for wealth fail dismally.

There is much amusement and enjoyment to be had in reading an Ukridge short story and watching how the implausible plan at first seems, against all logic, to be proceeding nicely, before the inevitable happens and he loses everything.  There’s no serious message here or exploration of emotional themes, just pure fun.

To give you a flavour of Ukridge’s world, his schemes involve running a dog training college, in which he intends to train dogs to appear in music hall productions and to live off rentals from the music hall owners.  This scheme turns to dust when his aunt discovers he has purloined the dogs from her.

Other doomed plots involve him acting as manager to an immensely talented but soft-hearted boxer and a conspiracy to take advantage of an accident insurance policy by having the beneficiary, an acquaintance of Ukridge and Jimmy, deliberately get injured.  The plot backfires spectacularly when the chap in question gets run over but, on waking can’t remember the existence of the conspiracy and keeps the payout himself.

Despite Ukridge’s moral failings, one can’t help rooting for him and I would recommend these short stories to anyone who’d like an undemanding but amusing read.
Posted by Falaise at 3:22 PM

I just the Ukridge stories earlier this year, but I didn't realize there is a novel as well. I do enjoy watching his schemes develop and then fall apart.

I'm glad to find another fan of Uncle Fred.

P.G.Wodehouse has been on my to read list for years now - I did start reading years ago but somehow did not continue.. maybe 2013..
and just wanted to let you know - an award for you - Liebster - http://myrandrspace.blogspot.com/2012/12/and-liebster-goes-to.html

Lisa - Yes, Love Among the Chickens was one of Wodehouse's earlier novels. Personally, I feel Ukridge is better in the short stories than in the novel.

Lady in Read - I can't recommend Wodehouse highly enough. And thanks for the award!

Start following our signals today and gain up to 270% per day.