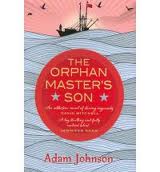 The Orphan Master’s Son is a wonderfully written novel with a complex and, at times, confusing narrative structure that may not make it everyone’s cup of tea.  Nevertheless, and without needing to resort to the flip comment that it is, undoubtedly, the best novel set in North Korea this year, I would recommend it to anyone who enjoys an intelligent novel that requires the reader to commit to it.

We first meet Jun Do, the principal actor in the book, in a remote orphanage in North Korea.  He believes that he is the son of the master of the orphanage and a beautiful woman who has been transferred by the regime to Pyongyang, the capital.  The narrative does, however, leave open the possibility that this is a fantasy created by Jun Do to help him create a sense of identity and, indeed, the nature of identity in a totalitarian state runs as an undercurrent throughout the novel, emerging as a major theme in the second half.

Upon reaching manhood, Jun Do is conscripted into the North Korean armed forces, the fourth largest in the world believe it or not.  Orphans, or those like Jun Do who end up being treated as orphans, are given the hardest and most dangerous jobs in the military and Jun Do becomes a tunnel fighter, trained to fight hand to hand in the total darkness of the tunnel system dug by the North Koreans under the Demilitarised Zone.

His toughness and prowess in this most demanding of roles is Jun Do’s first step in a varied career that leads him from tunnel fighting to kidnapping Japanese on behalf of the state and from monitoring English language radio broadcasts on board a trawler to taking part in a bizarre trade mission to Texas.

This first half of the novel is somewhat picaresque and is a collection of episodic stories, a kind of Orphan’s Progress.  Jun Do is, largely, carried along by events, conforming to the state’s demands of him and not really questioning things.  His identity is given to him by the government and his only real complaint is that people insist on identifying him as an orphan despite his adamant belief that he is not.

At this point, there is a major shift in the structure and plotting of the novel which is quite confusing at first and, I suspect, could alienate many readers.  The chapters of the second half of the novel are divided between chapters telling the continuation of Jun Do’s story and chapters written from the viewpoint of the public address systems that continually blast out propaganda to the people of Pyongyang and which tell Jun’s story from an entirely different perspective, highlighting the warped alternative narrative that the totalitarian system imposes on the lives of its citizens.  The shift in structure is magnified by the author’s decision to begin the second half midway through its timeline and to fill in the gaps gradually through the remainder of the story
.
We are introduced to Commander Ga, a military hero married to Sun Moon, North Korea’s most important actress.  However, it soon becomes apparent that Commander Ga is, in fact, our old friend Jun Do.  And, most bizarrely, no one other than Sun Moon and her children seems to be aware of this.  Although we are slowly told how this peculiar situation has come to pass, it was quire disconcerting and, once we know that Jun Do has killed Commander Ga in prison and assumed his identity, it is a shocking reminder of how a totalitarian regime can alter history and force its citizens to accept lies and deceit.

From here, although the narrative is complex, the basic plot becomes a relatively straightforward one  in which Jun Do plots to help Sun Moon and her children escape the madness and oppression of Pyongyang and defect to the USA.  The growing assertion by Jun Do of his own ability to choose his identity and fate turns the novel into an existentialist text for me as Jun Do ceases to be a passive acceptor of his life but takes positive action to determine his ending.

In reading the second half of The Orphan Master’s Son, Sartre’s Les Mains Sales came to mind, in which Hugo, the protagonist, having been pretty supine for much of the play exerts his will and lays claim to his existence by rejecting the chance to save his life when targeted by assassins in order to show that a murder he had committed had been carried out for political reasons rather than personal jealousy.  Given the option to save himself by accepting the latter, he cries “non recupérable!” (not salvageable) and seals his own fate.  In enabling Sun Moon’s escape, Jun Do also shows himself able to claim his own will rather than permanently bending to the will of the state.

Although the soft part of me was desperately hoping for a happy ending for Jun Do afgter all of his hardships, the lack of one did not prevent The Orphan Master’s Son from being highly readable and enjoyable.  Although the author had only visited North Korea once, the respected author Barbara Demick, an expert on North Korea, has praised the book for its portrayal of North Korean life.  It also says a lot about the barbarity and surrealism of everyday life in the Hermit Kingdom that it is difficult to tell which of the appalling details are factual or the author’s artistic licence.

The Orphan Master’s Son is, by necessity, a dystopian novel, redolent with echoes of 1984.  It is also, as well as a novel of ideas, a spy story and a love story.  It isn’t perfect - oddly enough, I found the episode set in Texas to be far less believable that the rest of the novel, despite the fact that the author is American - but I believe it is an excellent novel and certainly one of my favourite reads of 2012.

Many thanks to the publisher, Random House, for allowing me to read a review copy from Netgalley.
Posted by Falaise at 4:20 PM

This book impressed the heck out of me when I read it last year. Also, your book jacket is much better than the current paperback one in the US.

I've been reading some contradictory opinions about this one and can't help but wish that the authors were really North Korean.

Does Adam Johnson mention his research process somewhere in the book. It must be hard to "get it right" with such a country so closed to the outside world.

Alex - in the edition I read, there was an author interview at the end, where he did talk a bit about his research process. I've read a couple of pieces where people who actually do know North Korea well comment on how realistic a lot of the book is.

I found this by chance looking for a new Kindle read and was just blown away. It was completely engrossing, disturbing yet beautifully written. One of those books you finish then suffer a mild bout of depression that you will never have the experience of reading it for the first time again.

Did you know that you can shorten your long links with Shortest and get cash from every visit to your shortened urls.