2,476: Another Time, Another Life by Leif GW Persson 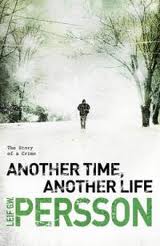 For those of you who have read my post on Between Summer’s Longing and Winter’s End (BSLWE), the first in Leif GW Persson’s “A Story of a Crime” trilogy will, no doubt, be unsurprised to find that this post on its sequel is equally positive.

Having based BSLWE on the murder of Swedish Prime Minister Olof Palme, Persson again blends a real life crime, in this case a siege of the West German embassy in Stockholm in 1975, with his fictional crime, in this case, the murder of a Swedish civil servant in 1989, to create a launch pad for another densely plotted, well-written and slyly humorous novel.

Although Another Time, Another Life also has a complex interweaving of storylines, I believe that it is actually more accessible than its prequel which featured a telescoping of the investigation of a single crime by two separate groups of police.  In Another Time, Another Life, the interweaving is between the two different crimes and it is much easier to see how the strands come together.  It is much more tightly plotted and is a more conventional read.

One of the features of Persson’s writing that I am coming to love is his cross-pollination of characters from his other work.  Although Lars Martin Johansson is the nominal hero of both these books, other characters from Persson’s oeuvre such as the hilariously unpleasant and incompetent Backstrom, who is the anti-hero of his own series of books by Persson.  Other characters from BSLWE also make more or less welcome reappearances.

Another Time, Another Life is, at first glance a police procedural style novel, focussing on the nuts and bolts of the police investigation into the civil servant’s murder and featuring beat cop Backstrom, whose ham-fisted and bigoted attempt to turn it into a “gay-slaying” case completely confuses the issue.  However, Persson is not “merely” a crime writer and uses the format to explore other issues relating to Swedish society and, in particular, the self-justifying and perpetuating nature of Sepo, Sweden’s “closed” or secret police whose leadership has, fortuitously for the reader, been assumed by Johansson.

What this means is that the plot moves more into political thriller territory by adding an additional layer to Johansson’s investigations: not only is he trying to find the killer of the civil servant but he must also work out who within the Swedish establishment wants the victim’s possible link to the embassy siege to be found or, indeed, covered up.

As this is Persson, we are also given a wry look into the nature of Swedish society and the culture of its law enforcement agencies.  Persson doesn’t shy away from exposing the sexist, racist and right-wing tendencies that can flourish in what, from the outside, can look suspiciously like a model society.  If it weren’t for Persson’s sense of humour, this could, no doubt, be quite dispiriting.  I especially enjoyed the bitter irony of the ending where the appalling Backstrom manages to have his “solution” to the 1989 murder accepted and the murder ascribed to a gay serial killer.

I’m no expert when it comes to Scandinavian crime fiction which is all the rage at the moment but I am a bit surprised that Persson’s novels aren’t better known.  They are deeply satisfying and thoroughly absorbing and I’d recommend them highly to anyone.

Many thanks to the publishers, Transworld, for sending me a copy.
Posted by Falaise at 3:45 PM

Follow our signals right now and gain up to 270% daily.