2,578: The Glass Books of the Dream Eaters by G.P. Dahlquist 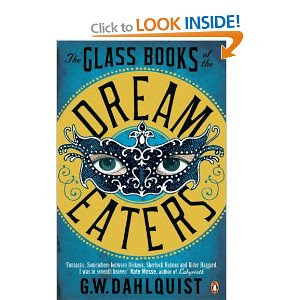 Celeste Temple is perturbed.  Her fiancé, Roger Bascombe, an up-and-coming young man at the Ministry, has just broken off their engagement for no apparent reason.  A spirited girl, she decides to go to the Ministry and to follow Roger about his business so as to find out the reason for the breaking of the troth.  She does so and is immediately plunged into a most peculiar party at a mysterious country house, where she encounters what will turn out to be a powerful cabal, intent on acquiring power and influence beyond belief.
But she does not stand alone. As the story progresses, Miss Temple is joined by ‘Cardinal’ Chang, a flamboyantly dressed assassin with weak eyes and Dr Svensson, a mild-mannered doctor and spy, who is chaperone to the dissolute Prince Karl-Horst of Macklenburg, one of the planned victims of the cabal.  Together they will discover the secrets of the glass books and wreck the conspiracy.
The central conceit of the Glass Books of the Dream Eaters relates to the mysterious blue glass from which the glass books are made.  It is possible to store memories and emotions in the glass and to use the glass to extract them from subjects who undergo a secret Process.  The Process removes all doubt from those who undergo it and enables them to achieve all their goals in life.  However, it binds them to the leaders of the cabal who use their acolytes in their bid for power.
The ringleaders, who include the Contessa (an alluring noblewoman), Francis Xonck (a rich businessman) and the Comte d’Orkancz (the “scientific” brains behind the group) are trying to obtain control over the supply of an indigo clay that is necessary for the manufacture of the blue glass. The duchy of Macklenburg is the location of large deposits of this material and the cunning plan is to suborn the heir to the duchy, the afore-mentioned Karl-Horst into undergoing the Process and marrying Lydia Vandaariff, the daughter of Robert Vandaariff, a wealthy man who is under the control of the cabal.  The Duke of Macklenburg will then be bumped off and the cabal will control the ruling family of Macklenburg and, hence, the indigo clay.  OK, are you with me so far?
, Cardinal Chang and Dr Svensson spend most of the book chasing around after the cabal, being captured and then miraculously escaping their clutches before finally scuppering the cabal’s plans.
So, how would I summarise the Glass Books of the Dream Eaters?  Well, if you take a base of Victorian pastiche, layer it up with slatherings of Dumas and Anthony Hope-style derring-do and action, liberally splash with steampunk elements, season generously with erotica and sprinkle on a little gothic, you would come up with something like this.
Without question, there is a lot of entertainment to be had from this book and the first 300 or so pages galloped past.  There are fights, chases, escapes, sex, spying and all manner of other excitements.  The problem is, however, that the book runs to nearly 800 pages and the remaining 500 pages contained even more fights, chases, escapes, sex and spying.  It all became a bit repetitive.  One or more of our heroes would do a bit of snooping, come across a member or minion of the cabal, get chased, have a struggle, be captured and escape in a seemingly endless cycle without moving the plot significantly forward.  After a while, I wanted to scream “get on with it” at the author and it became a little dull.  Now, interestingly, I believe the book was originally published in the US in two parts, which might have broken it up a bit and reduced the repetition but, published in a single volume, it all became too much.
There was definitely a sense that the author was actually making the plot up as he went along.  It meandered and didn’t really go anywhere with conviction.  There are plenty of good ideas but I felt as if, in keeping with the heavy eroticism that runs through the book, I was witnessing a case of literary premature ejaculation.  The author appeared to have had a really good idea for a plot and setting and some fun and interesting gimmicks to use but hadn’t really thought it all through before splurging it all out over the page.  Ultimately, I would have enjoyed it more at two thirds the length and, although I have the sequel in one of my TBR piles and will read it one day, it will not be emerging from the pile any day soon.
If you like Victorian-style adventure or steampunk or you enjoy reading books with kinky bits in, then you will probably enjoy it, but I would read half of it, have a break and then read the rest.  One final word of warning: if you are of a sensitive disposition when it comes to sex, this may not be one for you.
Posted by Falaise at 3:55 PM

Falaise, that was one funny review! Book bloggers are their best when they get a bit snappish ;)