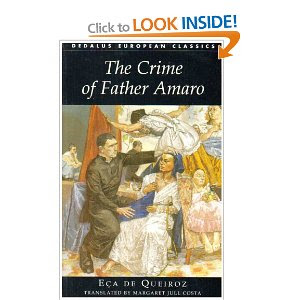 There is a street in the small Portuguese city of named after Jose Maria de Eça de Queiroz, the author of The Crime of Father Amaro.  It is, apparently, no more than a dark back alley which may seem a little disrespectful to one of ’s greatest writers, a man considered by Zola to be greater than Flaubert.  Once you have read The Crime of Father Amaro, however, not only will you understand such disrespect but you will probably be surprised that even a back alley was given his name as Eça de Queiroz’ views on the 19th Century inhabitants of Leiria are damming.

The Leiria of The Crime of Father Amaro is filled with provincial, small-minded and hypocritical people.  There are liberals with few principles, women in thrall to the Church and priests who, between them, display pretty much every one of the seven deadly sins.  The town is a hotbed of gossip and intrigue, both political and social.  Indeed, there are only two characters in the novel painted in a positive light – Father Ferrão, a country priest, and Doctor Gouveia, Leiria’s resident medic.  Unsurprisingly, both of these are considered by commentators to reflect Eça de Queiroz’ own beliefs.

The plot of The Crime of Father Amaro centres around the house of São Joaneira at Rua da Misericordia, where she lives with her daughter, Amelia.  São Joaneira is a widow and the mistress of Canon Dias, the senior priest in Leiria.  Into this household comes Father Amaro, a new priest in the city.

Amaro grew up in the household of a noblewoman and, after the death of his parents, was babied by the women of the house.  Lazy and weak, he is put into the seminary and becomes an ordained priest, although he has no true vocation.  He uses his aristocratic connections to have himself transferred from a remote mountain parish to the cathedral in Leiria, where the Canon arranges for him to lodge with São Joaneira.

He quickly becomes infatuated with Amelia, who, in turn, falls in love with him.  Amelia is engaged to Joao Eduardo, a liberal clerk who, on becoming aware of the attraction between Amelia and Amaro, writes a polemic for Leiria’s liberal newspaper, denouncing Amaro and the other priests in the city for their peccadilloes.  The priests discover that Eduardo is the author and set about destroying his life, having Amelia break off her engagement and arranging for Eduardo to lose his job.  Even the city’s leading liberal politician, Godinho, refuses to help as he has reached a political arrangement with the Church.

Amaro, having had a crisis of conscience over Amelia takes his opportunity to seduce Amelia when he discovers the Canon’s ongoing affair with São Joaneira and the two become lovers, using the sexton’s house as their love nest under the pretext of ministering to the sexton’s disabled daughter Toto.  One of the most striking images in the book is that of Amelia and Amaro making love upstairs, while Toto lies sick in bed downstairs, listening.

Eventually, their sins catch up with them.  Amelia begins to feel guilt over the affair and becomes strained and unwell.  The Canon finds out about the affair and threatens to inform the Church authorities until Amaro points out that he knows about the Canon’s affair with São Joaneira.  Dias becomes complicit in the affair until the inevitable happens and Amelia falls pregnant.

Amaro tries but fails to find Eduardo and to get him to marry Amelia and hides her away in the countryside where she is ministered to by Father Ferrão, a kindly cleric who almost succeeds in freeing her from Amaro’s control.  In the end, however, Amaro’s hold is too strong.

Amelia gives birth to a son.  Amaro takes the child and hands him over to the “weaver of angels”, an alleged wet nurse who specialises in making sure that unwanted and inconvenient babies perish.  The baby dies and, on the same night, so does Amelia, without ever seeing her son.

Amaro leaves Leiria, feeling distraught and guilty but, as the book ends, we see him in , chatting to the Canon and to the Conde de Ribamar about how terrible it is that priests are not respected very much and joking about how he only takes confession from married women, after Amelia.

There are no happy endings here.  Amelia may have achieved spiritual redemption on her death bed but she is still dead and never even gets to hold her baby, despite her pleas.  The wicked go unpunished and, apparently, unremorseful.  Eça de Queiroz is scathing about the lack of morality and charity of the priests and has a wonderful way of showing their character flaws in a couple of short details, such as the Canon’s hairy hand stroking Amelia’s cheek.

This was a wonderful book.  There is a lot of sly humour in it as well as Eça de Queiroz’ serious points.  As well as the main plot, there are numerous sub-plots and a whole rogue’s gallery of richly drawn minor characters.  The writing sparkles and the book simply bulges with detail and life.

Eça de Queiroz was a great fan of Dickens and some of the characterisation and humour is redolent of Dickens at his best but without the sentimentality or the verbosity.  I thoroughly enjoyed it and would recommend it heartily.  Super stuff!

I’ve only read one book by Eça: Os Maias. It was the book everyone read in school. But more than the Maias, O Crime made his way into mass culture. Lots of references are still used today, for instance, we use the word Toto to refer to someone not very smart. I’m glad to know you’ve liked it!

And Leiria is actually a nice city, but still very conservative :P

Alexandra - Thanks for the comment. I really did enjoy it and I'm sure Leiria is a nice place really! It;s a bit harsh using Toto for a thick person - I felt quite sorry for her and she was smart enough to grass Amaro and Amelia up to Canon Dias!