2,579: The Last Days of Hitler by Hugh Trevor-Roper 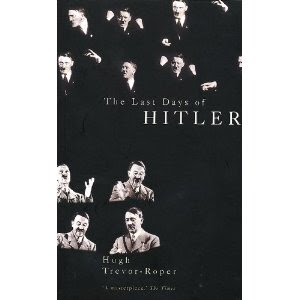 I have personal history with this book.  Many, many years ago, as a sixth-former at a small public school in , Hugh Trevor-Roper (by then, Lord Dacre) came to speak to a small group of us about the last days of Hitler.  I was quite excited by this, having heard of his book and being very interested in that period of history.  Even though his reputation had by then suffered as a result of the affair of Hitler’s Diaries, I was looking forward to some insights on to those cataclysmic days of late April 1945.
Instead, I sat bemused as this old man sat and gave a lengthy discourse on how he had ridden around on a motor cycle in late 1945 and 1946.  In disgust, I stopped listening and enjoyed a restorative hour or so of day-dreaming.  In hindsight, of course, my immaturity meant that I missed out on a story quite as interesting as that of Hitler’s last days – the story of how a young Oxford don turned Army intelligence officer managed to find and interview many of the last people to be with Hitler and to piece together the story of what happened not only to Hitler personally but also to the other leading Nazis whilst the Russian armies were besieging Berlin.  I try not to have many regrets in life but failing to appreciate Trevor-Roper’s talk and wasting the chance to ask him about his time in will always count as one of them.
The Last Days of Hitler was first published in 1947 and has remained in print continuously since then.  The book was updated by Trevor-Roper on several occasions to reflect new information that had come to light and he also wrote a number of new forewords explaining some of the key controversies over Hitler’s death and how new evidence had solved them.  Even today, it remains the leading work on the final weeks of Hitler’s life and is not only academically impeccable but also a wonderful read.
in April 1945 must have been like a scene from Dante’s Inferno or maybe a Bosch painting.  As Russian artillery shells rained down, turning the city to rubble and as the massed Russian armies raced towards the Reich Chancellery, looting, raping and pillaging as they went, Hitler, Eva Braun, the Goebbels family and their immediate staff lived a twilit existence in a bunker underneath the Chancellery.  As Hitler’s mental health disintegrated, leaving only fantasies of secret wonder weapons and, in his most maniacal moments, dreams of a Wagnerian Götterdämmerung, outside, Nazis such as Himmler, Speer and Doenitz were desperately seeking their own salvation and trying to make peace with the Western Allies.  Eventually, the inevitable happened.  In the early hours of 30 April 1945, Hitler, having married Eva Braun the day before retreated with his bride to their quarters.  Eva took a cyanide pill and Hitler shot himself.  In a macabre twist, he used the same pistol that his beloved niece, Geli Raubal, had used to kill herself years previously.
Hugh Trevor-Roper was commissioned by Sir Dick White, Head of British Counter-Intelligence in the British Zone of , to find out what had happened in the bunker in order to quash the lurid rumours circulating in late 1945 about Hitler’s fate.  The Last Days of Hitler is a testament to a remarkable piece of detective work by Trevor-Roper, in which he tracked down most of Hitler’s immediate circle and persuaded them to tell their stories.
I’ve read posts on other blogs over the past couple of months that have discussed whether non-fiction books can have literary merit (or, at least, can be written in a literary fashion).  I would point anyone who doubts this in the direction of the Last Days of Hitler.  Trevor-Roper, in common with his near-contemporary AJP Taylor, manages to combine academic precision with an expressive writing style that uses creative imagery and great pacing to tell his story.  He also has a sardonic and witty way of encapsulating the character flaws of leading Nazis in pithy descriptions and asides.  It is that rare thing - a academically sound text that reads like a populist work.
In many ways, Trevor-Roper’s career was book-ended by Hitler.  The last Days of Hitler brought him to general attention in 1947 and, almost 40 years later, his erroneous attribution of validity to the forged Hitler diaries was to bring him general notoriety as Dacre of the diaries.  Nevertheless, this book is, quite simply, essential reading for anyone with even a passing interest in its subject matter.
Posted by Falaise at 2:18 PM