Top Ten Tuesday: The Books I Wish I'd Read As A Child 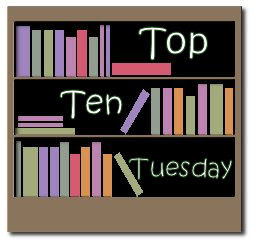 It’s Top Ten Tuesday again at the Broke and the Bookish and this week’s topic is the top ten  children’s books I wish I’d read as a child.  It’s actually been a difficult one for me to write.  My parents were very education-oriented and so reading was strongly encouraged from an early age.  Weekly trips to the library on Saturday mornings were a feature of life and created a habit that lasted until adulthood and the interference of things like work and hangovers.  I can’t remember either of my parents refusing to buy me a book if we were out shopping and books were also the standard rewards for me doing well academically.  When I went away to boarding school, it was normal for parents to open an account at the village bookshop, with a maximum spending amount.  I was allowed as much as I wanted “within reason”.
In essence, this meant that, if I wanted a book, I could get it.  So, in writing this list, I’ve really had to look at books I didn’t know about, books I didn’t want to read but, looking back, I probably should have and books I wish had been written when I was a child. So, in no particular order.......
1.            The Wind in the Willows by Kenneth Grahame.  I never really had the urge to read this as a child.  I don’t know why.  I first read it as an adult and loved it.  I know now that I would have thoroughly enjoyed the adventures of Toad, Ratty, Mole and Badger had I only tried it.
2.              The Catcher in the Rye by JD Salinger.  Yes, it’s true.  I have never read the Catcher in the Rye.  Not as a child and not as an adult.  It feels somehow shameful.  Everybody has read this.  Except me.  I feel as if I should have read it as a teenager and wonder whether Holden Caulfield would have spoken to me the way he appears to have spoken to so many others.  I will read it one day, I promise.
3.            Asterix by Goscinny and Underzo.   I simply love Asterix.  I think the stories are great and the visual jokes are clever and even reward repeated readings, an unusual thing for a comic strip.  Technically speaking, I did read these as a youngster but, owing to my father’s unreasonable prejudice against comics, I was only allowed to read them in French or Latin and didn’t read them in English until I became an adult.  Summer holidays to France were never complete without me buying a couple of hardback albums to add to my collection.
4.            The Wizard of Oz by Frank L. Baum.  Never read the book, always hated the film.  It was one of those Christmas Day classics, along with the Sound of Music (also on my list of least liked) and James Bond (yay!).  I now have a feeling that the book may have had more to say than Judy Garland and that wretched dog.  Not in Kansas anymore?  No s**t, Sherlock!  Anyway, I don’t know if I would have enjoyed it but I may have done.
5.            The Lord of the Flies by William Golding.  Virtually every schoolchild of a certain age in England read this as a set book .  Except at my school.  I am absolutely sure I would have enjoyed it and that it would have spoken to my inner savage.  I suspect I wouldn’t particularly enjoy it now.
6.            The Weirdstone of Brisingamen by Alan Garner.  This is a classic British children’s fantasy novel about Susan, the unwitting owner of the Weirdstone, who is hunted by the minions of Nastrond, a dark spirit.  This book would have been right up my alley as a child and I haven’t the foggiest why I didn’t.  It may be a bit late for me to read this now.
7.            Artemis Fowl by Eoin Colfer.  Described as “Die Hard with fairies”, the title character is a teenage criminal mastermind, whose nefarious schemes are thwarted by the LEP, the fairy police.  I was an adult by the time the first novel in the series was written but I wish they had been around in my day as I would have loved them.
8.            How the Grinch stole Christmas by Doctor Seuss.  I don’t know about now but when I was a child, the Doctor Seuss books were not particularly well known in Britain and seemed to be very much an American thing.  This one sounds like one I would have enjoyed if I had only known about it.
9.            The Chronicles of Narnia by C.S. Lewis.  I actually did read the Lion, the Witch and the Wardrobe as a kid but, for some reason, never got round to reading the rest of the cycle.  No idea why, no idea whether I would enjoy them now.
10.          Fundamental Principles of the Metaphysics of Morals by Immanuel Kant.  Only joking!
Posted by Falaise at 10:48 AM

I loved the Chronicles of Narnia as a kid. That's one of those books that will always stick with me.

Not being a English native-speaker, I've been reading all these “classic” children books only now. It’s a shame that their impact is completely different from what it could have been then.

Although I haven’t read Wind in the Willows, one of my favorite TV shows when I was a kid was Thames’ adaptation for TV, you know the one? www.youtube.com/watch?v=zTYgBPvV2ts Oh it was a join to listen to the short music clip with the Big Ben reflected on the river that announced another episode :)

Avid Reader - I really enjoyed the Lion, the Witch and the Wardrobe and I just can't for the life of me remember why I didn't go on and read the rest.

I loved Immanuel Kant! It used to be the only thing to get me to sleep when i was a kid. Now i read into it, so it has the opposite effect. But i have to agree with you on Oz. Idiot movie, never read the book. Was gifted "Wicked" that scarred me for life

Orhedea - I've fortunately managed to miss out on the whole "Wicked" thing.

I read Wind in the Willows and the Narnia books with my sons when they were young and I enjoyed them even although I don't like the religious aspect of Narnia. I read quite a few Alan Garner books not long ago - it's not too late! I missed out on quite a lot of children's classics, I think I went on to adult books too quickly.

Katrina - thanks for the comment. I'm just not sure about reading Garner now and, as my TBR pile and list are so long, I suspect I will pass on it.