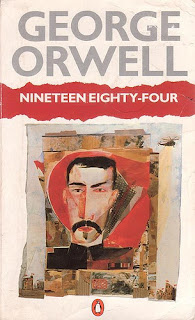 Comparisons are often made between the Brave New World of Aldous Huxley and Orwell’s vision of the future in 1984.  Huxley created a world of softness, where emotions are muted and human passions, such as love and ambition, are smothered.  By a combination of conditioning and biophysical engineering (not genetic engineering, mind), the citizens of Huxley’s future are politically paralysed by material comfort and the encouragement of hedonistic pleasures.

Orwell’s world is much different.  The three mega-states of Oceania, Eurasia and Eastasia are in a perpetual state of war, with shifting alliances and geographical conflicts being the only signs of change.  Domestically, the Party, led by the possibly mythical Big Brother, crushes all opposition underfoot and is totalitarian in scope, seeking to control all aspects of life.  There is a telescreen in every room so that Big Brother’s thought police can spy on everyone at any time.

There are elements of 1984 that will be familiar to anyone with a passing knowledge of the Soviet and Nazi regimes of the 1930s and 1940s.  Like the KGB, the thought police come in the dead of night and their victims simply disappear.  There is cult-like worship of Big Brother, an institutionalised distaste for sex and a huge propaganda machine, attempting to control the very thoughts of the people.

In purely literary terms, 1984 is not a great novel.  Its plot is straightforward:  Winston Smith, a minor Party official, commits a thought crime by beginning to write a diary.  From the very beginning, he knows that it is only a matter of time before he is caught and killed.  He meets Julia, another Party worker and they begin an affair.  They meet a more senior official, O’Brien, one of the Inner Party.  He lends them a book by Big Brother’s arch enemy, Goldstein, and enrols them into a secret resistance movement but, almost inevitably, he turns out to be part of the thought police and arrests them.  Under torture, including the infamous Room 101, Julia and Winston betray each other.  At the end of the novel, they see each other once more and exchange looks of hate for each other.  The final image of Winston is as a “non-person”, alive but excluded from society.  And yet, he realises he loves Big Brother, whose victory is complete.

The characterisation is not much better:  almost all of the main characters are shallow, mere ciphers for the ideas Orwell wants to explore.  In pure literary terms, Orwell wrote much better books than 1984.  Try Animal Farm, Down and out in London and Paris, Homage to Catalonia or any of his volumes of essays.  The importance of 1984 lies in its description of the results of totalitarianism and its call for us to resist it.  And at the core of it is what I believe to be Orwell’s core belief – that our best defence and most central value is the truth.  Winston once finds evidence of Big Brother’s fakery of history and this is an epiphany for him.  At the heart of 1984 is the way in which Big Brother and the party manipulate the truth by propaganda, by imposing a new language, shorn of beauty and subtlety and by rewriting history to be consistent with the present.
Oceania has a huge bureaucracy devoted to rewriting newspapers to make the past reflect the present, to persuading the people that they have never been at war with Eurasia despite the fact that Winston clearly remembers that they were.  The Bible may tell us that the truth shall set us free and Big Brother would agree.  So he makes sure that he creates the truth and that the truth shall be flexible and made to fit his needs.

Whereas Brave New World gave us a vision of a soft new world in which people were stroked into compliance through their conditioning and the pleasures around them, 1984 offers a more brutal vision.  For me, one of the most chilling images of the book comes when O’Brien tells Winston, “If you want a picture of the future, imagine a boot stamping on a human face—forever.”  Big Brother forces submission.  He batters beliefs into the heads of the people and demands absolute obedience.  The Two Minute Hate and the torments of Room 101 are just some examples of how Big Brother and the Party crush the human spirit until Winston has betrayed everyone and everything dear to him and, at the very end, when nothing else is left, Big Brother wins the ultimate victory sa Winston capitulates and betrays the last thing he possesses – himself:

“He gazed up at the enormous face. Forty years it had taken him to learn what kind of smile was hidden beneath the dark moustache. O cruel, needless misunderstanding! O stubborn, self-willed exile from the loving breast! Two gin-scented tears trickled down the sides of his nose. But it was all right, everything was all right, the struggle was finished. He had won the victory over himself. He loved Big Brother.”

1984 is memorable.  It has given us phrases that are now part of everyday language like Big Brother, Room 101, thought crime and Newspeak.  I first read it in 1983 and, although it has clearly not come true, the world Orwell describes had a massive impact upon my beliefs and my political beliefs.  I can completely understand why it would have been banned in the Soviet Union – they would have been crazy not to.  I can’t really see why it was banned in the USA, however.  It may have come about at the time of the McCarthy hearings and there may have been sensitivity about the authoritarian way that Americans were beginning to be harassed for having unorthodox political views.   I don’t know – just a thought.

There are very few books that are more “essential” than 1984, in my opinion.  I suspect you’ve read it too.  I would suggest reading it again, it really is worth it.

Great review and very good points. The two most scary things about the world if 1984 were on one had the re-writing of history (how are able to know if it happened already and where?!).

The other was what Big Brother did language to dumb them down. I have had huge debates with friends on whether just because we don't have a word for a concept, if it can exist at all. Does “freedom” exist it we don’t have a word for it and hence don’t know it exists at all? Mind boggling!

Alexandra - I totally agree with you. On the language point, I suppose that "natural"! languages tend to create or adapt new words in an organic way to descrbie new concepts or things. Alternatively they take from another language (see the constant struggle of teh Academie Francaise against the influx of English words into French usage).

I suppose the more difficult issue is if one's access to other languages is restricted and your own language doesn't have the tools or the flexibility to construct appropriate words.