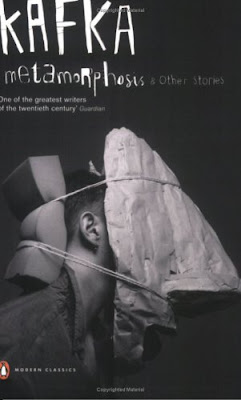 Before reading Metamorphosis, I had never read any Kafka.  I’d always had this vague idea that he’d be dark, gloomy and miserable and that his books would be thoroughly hard work.  How wrong I was.  At times, I found the descriptions of Gregor Samsa’s behaviour as he adapted to life as an insect and the reactions of his family to border on farce and I finished the novella (it’s too short to qualify as a novel) far too quickly.

Obviously, the themes of the story are far darker.  At its heart, Metamorphosis deals with alienation and transformation.  The most overt transformation is that of Gregor himself.  From the opening of the story, when he wakes up to find himself transformed into a cockroach-like insect, we track his physical deterioration and increasing estrangement from his family until, at the end, he succumbs to infection and neglect and dies.

Yet this is not the only transformation.  In the beginning, Gregor’s parents and sister are dependent upon his earnings as a salesman and one of his main concerns is how his transformation will affect their ability to live.  We gradually learn that, in fact, they have been taking advantage of him and have been able to save a reasonable sum of money whilst living off his wages.  They then, themselves, transform.  His parents and sister go out and find work and become self-sufficient again.  They find a smaller flat in which to live.  Eventually, after Gregor’s death, the story comes full circle as Mr and Mrs Samsa begin to see Gregor’s sister, Grete, in a new light and realise that she is becoming a woman.

As a corollary to the awakening of Gregor’s family, their love for and care of Gregor begins to diminish.  Grete had taken on the role of caretaker to him and had even tried leaving different foods out for him to discover how his tastes had changed as a result of his physical transformation.  As the story progresses, she begins to neglect him and he is eventually left alone in his room.  His father becomes enraged and tries to kill him, throwing an apple at him which gets embedded in his carapace and causes the infection that will contribute to his death.  His insectoid nature diminishes their love for him until his appearance in front of their  lodgers causes Grete to conclude that he is no longer Gregor, as Greogr would not have been so inconsiderate.

One of the other aspects of the story that really struck me was the lack of curiosity shown by any of the main characters about Gregor’s changed circumstances.  At no point does anyone, including Gregor, ask or wonder why or how his transformation happened.  Even Gregor gives up any idea of changing back very early on.  Everyone’s focus is on the practical implications of his change.  Gregor is constantly trying to work out how to live as an insect, whilst showing (a rather naïve) concern only for his family and how he can be considerate of them.  His family spend most of their time adapting to having to work for themselves and finding ways to conceal Gregor from their lodgers and visitors.  This was probably the oddest aspect of the story for me.  I suspect if I, or one of my nearest and dearest, had been changed into a cockroach, I would be giving some pretty serious thought to what had happened and what to do about it!

Metamorphosis was banned by both the Soviet and Nazi regimes.  It was banned in the for being both decadent and despairing.  I can’t quite work this one out.  I suppose it is a bit depressing in that it shows a family quickly ostracising and then denying one of its members within a very short space of time for having changed into something different and inconvenient.  This could be seen as portraying groups as intolerant and untrustworthy, something which would have been unpalatable to a collective-minded regime such as the Communists.  Having said that, the Soviets were keen on supplanting the family with the Party and so might have seen Metamorphosis as an attack on the family concept.  Furthermore, it is a bit strong to describe it as despairing.

Anyway, I am now a Kafka convert and am looking forward to reading more in future.

I read it many years ago but the thing that remains is the point that also intrigued you: none of the characters questions why the transformation happened. Kafka probably wanted to make a point - just this detail makes the whole story much more surreal.

That's a really good point. It makes the whole thing seem alien from the start.

Follow our signals today and gain up to 270% per day.