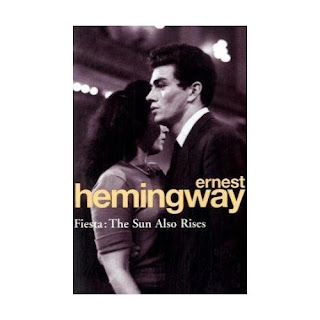 One slightly odd conceit of mine is that I am convinced that if a writer compels me to finish reading his or her novel despite me disliking all of the main characters, then that writer must be, at the very least, good and maybe even great.  On that basis, Hemingway is a great writer and Fiesta: the Sun Also Rises is a great novel.

The main characters, with the exception of Romero, the Spanish bullfighter, are all part of the expatriate Anglo-American set who hung around Paris in the 1920s, drinking, pretending to be bohemian and having sex with each other.  Ultimately, they are all pretty unpalatable characters – Jake Barnes, the narrator, is an impotent drip who is deeply in love with Lady Brett Ashley, a selfish promiscuous drunk.  She has slept with Robert Cohn, a moody, self-obsessed writer who cannot let go of her, despite the fact that she is engaged to Mike Campbell, a drunken bankrupt who spends his time cadging money or trying to get free drinks.  Enter the beautiful young matador, Romero, during the fiesta in Pamplona, and the scene is set for excessive drinking, fisticuffs and arguments.

In my youth, I would probably have read this and wanted to be one of the young Americans, partying around Paris and Spain, drinking too much and generally acting as if there was no tomorrow.  Now, in my “middle years”, it just makes me a bit tired and the jaded cynicism of the characters grates on me.

It is saved by Hemingway’s style.  The book reads like a hard-boiled detective story by Chandler or Marlowe, all short, staccato sentences, sparse and lean.  There are no literary flourishes, no flowery adjectives or convoluted clauses.  The writing is deceptively simple and therein lies the rub.  Hemingway is simply masterful at conjuring up images from direct language and at building the tension as the fiesta approaches and the group begins to fall apart.

I have also discovered a new word........polysyndeton.  Yes, you read me correctly, polysyndeton.  Now, on the assumption that there are at least a couple of you out there who, like me, haven’t a clue about this word, it describes a literary technique whereby a writer uses multiple conjunctions in close succession, especially where they are grammatically unnecessary.  So, “I went to the bank and took out some cash but was robbed on the way out and so I went to the police station and reported it.” is a (pretty poor) use of polysyndeton.  And the point of this is that polysyndeton was used by Hemingway to raise the pace of his writing and to convey a sense of immediacy.  Although I suspect he wouldn’t have been able to pronounce it half the time, given that he was usually half-cut.

Anyway, back to Fiesta: the Sun Also Rises.  Unpleasant characters, atmospheric writing and Paris and Spain provide great backdrops to the action.  Apparently one of the great 20th Century novels, it didn’t do huge amounts for me and I wouldn’t even class it as one of Hemingway’s best.  Which, I am told, puts me a distinct minority.

Follow our signals right now & profit up to 270% per day.