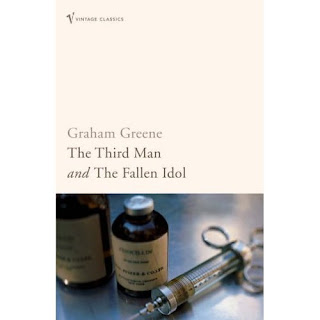 This view would, however, be misleading as the novel was, in fact, initially not intended for publication by Graham Greene but as a way for him to develop the story before he wrote the screenplay for the film.  The novel was only published after the release of the film, together with the Fallen Idol, another short Greene work.

Following completion of the screenplay, the director, Carol Reed, and Greene developed it through a collaborative process, resulting in the final film.  Although it remains remarkably faithful to the initial novel treatment (taking into account the change of nationality of several of the lead characters), there are some key alterations that make the film a superior beast.  The most obvious of these is the ending, which was the subject of a major argument between Greene and Reed (supported by the producer David O. Selznick).  Greene felt that ,

“an entertainment of this kind was too light an affair to carry the weight of an unhappy ending. Reed on his side felt that my ending — indeterminate as it was, with no words spoken, Holly joining the girl in silence and walking away with her from the cemetery where her lover Harry was buried — would strike the audience who had just seen Harry's death and burial as unpleasantly cynical.”

Reed and Selznick had their way and, as Greene himself acknowledged, the darker ending to the film undoubtedly improves the story.

Turning to the novel, it is, first of all, a fine story and Greene skilfully evokes the seedy and oppressive atmosphere of a post-war Vienna governed, like Berlin, by the Four Powers and populated by soldiers, spies, racketeers and ordinary people trying to survive in the war-ravaged city.  As with many of Greene’s best works, the Third Man addresses issues of personal morality.  There is the changing of perceptions of Harry Lime’s morality, which range from the almost hero-worship by Rollo to the cynical view of him held by Major Calloway, perceptions which shift further as the nature of Lime’s activities becomes apparent.  Greene also shows how individuals come to make compromises with their own morality.  A constant theme of Greene (a notable Anglo-Catholic) is how even the best of us are obliged to come to an understanding with our consciences, to make the little concessions and compromises that chip away at our sense of our own goodness.

In this sense, the Third Man fits with much of Greene’s oeuvre but in all fairness, it is not one of my favourites.  I can’t help feeling that there is a certain lack of substance to it and it left me slightly unsatisfied and a bit disappointed.  If you are a newcomer to Greene, there are others of his novels that are far better starting points.

The Third Man was listed in the first edition of 1,001 Books but was then dropped from the 2006 edition.  Its dropping is unsurprising, what is more peculiar to me was its initial inclusion.  Yes, it is a perfectly good short novel but there is no way that it should be in this kind of list.  I can only think that the compilers were blinded by the film, as they appear to have been with a number of other books in the list.  One point of curiosity about 1,001 Books is the number of books that became films that have been included and I can’t help feeling that, in many cases, there are other books that could have been included.

I'm not sure which came first, but I found the film of The Princess Bride far superior to the book. I can't think of any novelizations that are as good as films -- I think The Third Man must be an exception, since Greene was an established author writing the screenplay. That must be unusual. And I've completely forgotten the film so now I'll have to watch it again.

I thought the film Double Indemnity was better than the book. That was an unusual situation because Raymond Chandler worked on the screenplay, so it was one noir writer adapting another noir writer's works, and Chandler added a lot of snappy dialogue that wasn't in the book.

Also, while I wouldn't say it's better, I think Blade Runner was possibly as good as Do Androids Dream of Electric Sheep, although it's theme was completely different from the theme of Dick's novel.

Interesting question. To stay with Graham Greene, I found 'Brighton Rock' the film more absorbing - and frightening - than the novel. But wonder if I'd still feel the same now ...
I also thought the Powell & Pressburger film of 'Black Narcissus' improved on Rumer Godden's story - but only just! And it wasn't one of her best anway.
Otherwise, as you say, most films-of or books-of aren't especially impressive. I can only think of 'Zazie dans le Métro' (book by Raymond Queneau/film dir by Louis Malle) where both are pretty much equally wonderful (but that's just my preferences/prejudices peeping out!).