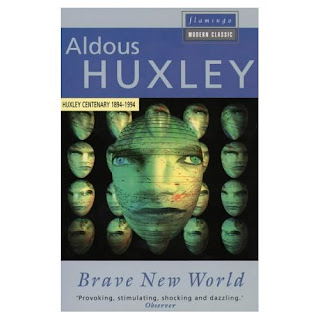 Brave New World is ranked at number 52 on the American Library Association’s list of most banned or challenged books and has been frequently challenged, usually for its portrayal of sexual behaviour and drug use.  In Ireland, it was banned in 1932 for being anti-family and anti-religion.  It is generally considered one of the great Western dystopian novels of the 20th Century, alongside Orwell’s 1984 and has given us the Alpha male (and, latterly, the Alpha female).

In Huxley’s Brave New World, love, family and religion have been eradicated.  War and conflict has been ended by the formation of the World State and the creation of a new society.  Children are artificially produced in Hatcheries and Conditioning Centres.  Scientific and industrial techniques are used to separate new foetuses into five castes (Alpha to Epsilon), with differing mental and physical attributes, and to engineer individual babies to suit their pre-determined careers and roles in society.  In addition to the physical engineering of society, babies and children are psychologically conditioned to be happy as a member of their caste and to accept and behave according to the cultural mores of the Brave New World.

The elimination or war and the imposition of a cap on total human population mean that material goods are in plentiful supply.  People are conditioned to consume, to have promiscuous sex and to need to be in the company of others.  The use of a recreational drug, Soma, is encouraged and seen as perfectly normal.  A desire to be alone is seen as anti-social and the concept of the family is considered pornographic.  The few individuals who do not conform are, when caught, exiled to remote islands such as the Falklands or Iceland to join communities of other non-conformists.

There remain a few reservations where “uncivilised” people live, savages who practice the old way of life in isolation from the rest of the world and it is the sudden contact between one of these savages and the World State that forms the basis of the plot.

If I’m being honest, the plot itself is pretty flimsy and almost seems to be a mere device to allow Huxley to develop his world.  The strength of the book is in the ideas that Huxley explores.  His world is basically a deadened world where emotions are dulled and peace maintained by the nihilistic hedonism of the populace.  History is not taught and historical books are forbidden, although there is probably no need for a formal ban as the vast majority are simply not interested.

On the face of it, Huxley fears the advent of such a world and, on this basis, the various bannings of Brave New World do not make sense as he is ostensibly warning us against the consequences of the very behaviour patterns that caused its banning.   And yet, I found that the book is not quite that clear cut.

We might find the society of the Brave New World disturbing – the engineering of foetuses into different castes, the elimination of family ties and the gruesome description of the birthing process are fearsome to our minds, used as we are to free will.  But if we have no free will and are conditioned to be happy in our pre-determined places, would life be so bad?  We would know no alternative and would not have anything to contrast against.  We would have been created content.  This is a very different future to that foreseen by Orwell, for example.  The Brave New World is not maintained by force and coercion.  It is not a miserable place, merely a dulled place.  Huxley himself seems ambivalent about it – the reservation from which the Savage comes is portrayed as a dirty and impoverished place and its inhabitants are not the Noble Savages of legend.  Even the World Controller, Mustapha Mond, is one of the more positively drawn characters of the novel.  On this basis, the attitude of the Irish government begins to make more sense if one accepts the premise that books should be banned for portraying unconventional behaviour positively (which I don’t!).

This is a profoundly thought-provoking work and a book that still has relevance for us today.  I read it and 1984 together and the two books are fascinating counterpoints to each other.  Ultimately, I recoil from the World State and its deadened, shallow world view but have to recognise its superficial attraction.

When I first read it Iwhen I was about 15 I remember thinking that I did not wnat to be an Alpha... not an Epsilon. Somewhere confortably in the middle. Can't remember why!

The scene with the babies and the lovely field still gives me goosebumps. have you seen any adaptations?

I haven't watched it on film, I'm afraid but the image in the book that chilled me was the opening scene where the new trainees are taken on a tour of the Central London Hatchery. I almost had a physical reaction to it.

I would also have to confess that I just assumed I would have been an Alpha! What modesty!

If you would like an alternative to randomly approaching girls and trying to find out the right thing to say...

If you would rather have women chase YOU, instead of spending your nights prowling around in crowded pubs and restaurants...

Then I urge you to view this eye-opening video to learn a strong little secret that has the power to get you your personal harem of attractive women just 24 hours from now: