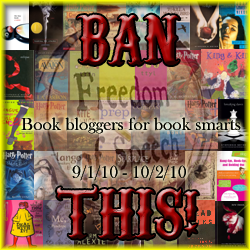 We are all familiar with Nazis burning books or the censorship imposed by communist regimes but book banning  also takes place in the USA, the UK and Western Europe.  We may be able to understand (if not approve of) the banning or challenging of some books but even a cursory inspection of a list of banned books will raise eyebrows.  A quick question for you – what do the following books all have in common?  Harry Potter, Twilight, the Grapes of Wrath,  Anne Frank’s Diary and James and the Giant Peach?  Yes, that’s right.  They have all been banned in various parts of the western world.
I find myself at a total loss to see why we should be barred from reading any of these books.  If they can be banned or challenged in free societies, how much worse must it be under authoritarian regimes?  If books such as those listed above can be banned under benign government, what would happen if we wound up with a government that was hostile to freedom of expression?
Our enjoyment of the freedom to read and to express ourselves cannot be taken lightly or for granted.  We may be able to laugh at the silliness of the Colorado librarian who locked away Charlie and the Chocolate Factory or the weirdness of the Hunanese provincial government for banning Alice in Wonderland but what happens when governments ban books that are critical of them or church  groups can have books banned that do not conform to their strictures?  We need to celebrate our freedoms so that we do not forget how important they are to us.
Banned Books Week has taken place in the US every year since 1982, although there doesn’t appear to be a UK equivalent. This year it is taking place between 25 September and 2 October and to mark it I am taking part in the Banned Books Reading Challenge hosted at Steph Sue Reads, which started at the beginning of September.  Between now and the end of the challenge on 15 October, I will be reading 7 banned or challenged books, one for each day of Banned Books Week.  The selected works are:
Check back here regularly to see how I get on!
Posted by Falaise at 8:27 AM

Hi Rich, in my usual organised fashion I have logged all of the books I have read since landing on the big island in Jan and have just finished my 47th!
Just a few to consider -Shantaram, Mao's Last Dancer (autobi), Twilight quartet (yes - stunned myself I am a closet vampire fan), White Tiger, and Breathe by Tim Winton. Can finally unpack all my books this weekend.......roll on! Sammy x

Sammy, I did something similar last year and listed every book I read in the back of a notebook! Hope the move goes well and I will certainly bear your suggestions in mind (except maybe Twilight - I am irrationally prejudiced against it!).