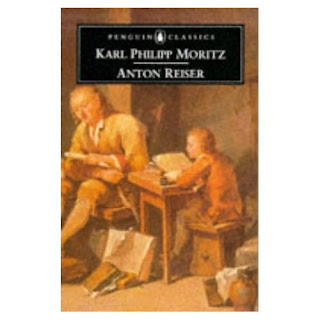 I approached “Anton Reiser” with a heavy heart. Its author described it as an autobiographical “psychological” novel which, for me, is not a good sign. It is also a German novel, which is another big, black mark in my book. Now don’t get me wrong. I am not a Germanophobe by any stretch of the imagination. I like the place and, on the whole, the people. I just have a problem with German literature and, indeed, much German culture. This is more of a reflection on my own lack of seriousness and intellectual gravitas than anything else. French literature? Lovely. Italian literature? No problem. Russian literature? Yes please. German literature? No thanks. It just seems heavy and wordy and a bit dull. There is a fantastic British comedy singing trio called Fascinating Aida who sing a song about German cabaret. The song is performed in a deliberately off-key, discordant and plonking style and that is exactly how I feel about German literature. So, as I say, when the RNG gave me “Anton Reiser” as my second 1,001 Book, I was not a happy bunny, especially as I am supposed to read a Thomas Mann novel as my third book.


Anton Reiser (a thinly disguised fictional version of the author) is a poor boy from 18th Century Hanover, who is intellectually gifted but doomed never to be able to benefit from his talents. His parents’ marriage is unhappy as their religious beliefs clash. He attends the local private grammar school but is forced to leave through lack of funds. The local prince comes to his rescue and funds his studies at Hanover’s senior school but a constant stream of set-backs result in humiliation for Anton from his wealthier classmates and, ultimately in his leaving Hanover to wander through Northern Germany in pursuit of his dreams of becoming a writer and actor. When he does obtain a place in an acting troupe, he is first prevented from going on stage by one of his many benefactors and, finally, when he manages to join up with the troupe, their manager has absconded with all their money, scenery and props.

To begin with, the story moves along with some humour and I was slightly surprised to find myself enjoying it. And then it started to go a bit pear shaped. The problem, you see, is that I really wanted to slap Reiser. He is an inveterate fantasist and is incapable of accepting responsibility for his actions. He sulks and often acts like a spoilt child. It is also difficult to decide whether he is a gifted boy, battered by life’s inequities or a self-deluded fool, with an overblown view of his own importance and ability. As I want to care at least a little bit about the lead character, this was problematic. The novel is also blighted by the incessant analysis of Reiser’s emotions and actions by the author, Karl Philipp Moritz. Given the autobiographical nature of the novel, this self-analysis may well have been cathartic or instructive for him but I found it plain annoying. It was as if Moritz was standing next to me, droning on in my ear, giving me a running commentary on the story. Finally, the continual setbacks suffered by Reiser eventually became boring and repetitious. If ever anything positive happened to him, it was certain that it would all go wrong within a few pages.

Now it has to be said that my view is not shared by all. The book is, apparently, considered by many to be a masterpiece and one of the most memorable pieces of German literature. This is yet more evidence to support my antipathy to German literature. This not a book one must read before one dies. I briefly considered using one of my substitutions on this book (see the Rules) but, regrettably, decided it was too early to do so. Bad decision. I have a few weeks respite now as I will be focussing on the Banned Books Challenge but after that I am slated for Buddenbrooks by Thomas Mann. It is a story of the decline and fall of a prosperous 19th Century North German family. Oh joy. A substitution is beckoning. Do I use it or do I have another go at a German novel?

Start following our trades NOW & earn up to 270% per day.