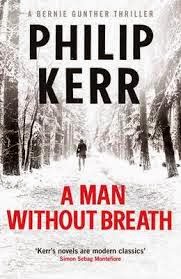 A Man Without Breath is the ninth outing for Philip Kerr’s stained white knight, Bernie Gunther, and is closer in spirit to the darker, more morally ambiguous Field Grey than to the enjoyable but lighter detective story of Prague Fatale.

The story opens a few short months after the German disaster at Stalingrad and, yet again, Bernie has got himself a new job.  This time, although retaining his rank in the SD (the security branch of the SS), he is working for the War Crimes Bureau of the Wehrmacht which is, in essence, a German effort to portray itself in a better light by investigating alleged Allied war crimes.  Staffed by former Prussian judges, it is a small anti-Nazi enclave within the German armed forces and a place where Bernie first comes into contact with a small group of aristocratic army officers plotting to assassinate Hitler.

Being at a loose end following the collapse of his investigation into the alleged British sinking of a German hospital ship, as a result of the principal witness dying in an RAF air raid on Berlin, Bernie finds himself packed off to Smolensk in Russia to investigate claims that a large number of Polish army officers had been killed by the Russians in a nearby forest; a place called Katyn.  If such a thing could be proved, not only would it be a boon for German propaganda, but it could also be used to drive a wedge between the Soviet Union and its Western allies.  As such, Bernie finds himself uncomfortably backed by Josef Goebbels himself.

Unfortunately for Bernie, he finds himself stuck in Smolensk at the end of winter and the ground is too hard to begin digging at the suspected mass grave.  Indeed, it’s doubly unfortunate both because Russia in 1943 is a pretty unsafe place for a German but also because he happens to be the nearest thing to a detective available when two members of a German signals regiment are found with their throats slit.  For Bernie, life becomes more uncomfortable still as his own inimitable brand of investigation soon garners him a number of enemies, including Field Marshall Günther von Kluge, the local German commander who wields almost unfettered power in his theatre of operations.

If one were to group together books like Philip Kerr’s Bernie Gunther novels, Martin Cruz Smith’s Arkady Renko series, Sam Eastland’s Inspector Pekkala books, William Ryan’s Alexei Korolev stories and Rebecca Pawel’s Carlos Tejada works, there appears to be identifiable a sub-genre of detective stories featuring honest detectives trying to do their best to seek justice against the background of repressive and corrupt regimes.  Gunther is typical of this, ideologically opposed to the Nazis but forced to operate within the state’s machinery, trying to remain as uncompromised as possible in an environment that corrupts or breaks all whom it touches.

Kerr is adept at drawing out some of the insanities of the Nazi outlook.  At one point, Bernie notes the lunacy of investigating and hanging two German soldiers for rape and murder of two Russian peasants when only a few miles away, an SS einsatzgruppen has just murdered 25,000 Russian Jews.  He also doubts whether publicising the Katyn massacre of 4,000 Poles is really going to deflect attention from the mass killings of Jews in Eastern Europe by the German forces.

As always, Kerr’s knowledge of the period and its personalities is exemplary.  One of the joys of a Bernie Gunther novel is the appearance of actual politicians and soldiers of the time, in this instance ranging from Josef Goebbels to July Plotters General von Tresckow, Hans von Dohnanyi, Fabian von Schlabrendorff, Wilhelm Canaris and Rudolf von Gersdorff.  Kerr’s historical notes at the end of each Gunther novel are also fascinating, revealing the fates of the individuals he introduces as characters.

In combining historical fiction with a hard-boiled detective theme, Kerr takes the Bernie Gunther stories to a deeply satisfying level.  Morally complex and ambiguous, entertaining yet melancholy and revealing both the resilience of the human spirit and the depths to which humans can sink, they are amongst my very favourite crime novels.  Best read in order, they are “must reads” for any crime fiction or, indeed, historical fiction enthusiast and, although his most recent books are not Bernie Gunther stories, I am counting the slowly passing days until the return of Bernie, a deeply flawed but attractive hero.
Posted by Falaise at 4:03 PM

This sounds fascinating. I've never read Philip Kerr -- one to look out for. Thanks.

This whole series is great, one of my absolute favorites!

Did you know you can shorten your links with Shortest and receive money for every visitor to your shortened links.

Start following our trades today & make up to 270% a day.