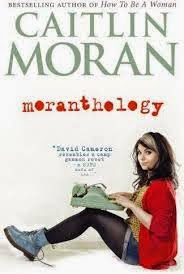 I feel as if I should open this post with a caveat, as a sort of health warning for anyone who may feel an inexplicable urge to treat my opinion as something worth paying attention to.  If you remember, in July 2010, The Times, Caitlin Moran’s employer, decided to erect a paywall to prevent non-subscribers (such as me) from accessing its online coverage.  I was outraged and swore an oath of utmost fearsomeness that I would never, ever be prepared to pay to read a newspaper online and that henceforth The Times would be a stranger to me (unless I found a copy on the Tube or in the loo at work).

Well, that lasted all of a fortnight or so before I grumbling input my debit card details and signed up for an online subscription.  It wasn’t for the news; after all I can get that anywhere.  No, it was for the columnists and the features and, if I’m being totally honest, for Simon Barnes and Caitlin Moran.  Put simply, I valued the enjoyment I get from reading their pieces enough to plonk down cash on a regular basis.

And so, it will come as no surprise that I thoroughly enjoyed Moranthology which, as its name suggests is a collection of some of her Times columns.  In fact, I enjoyed it more than I expected as I would have already read most of the pieces when they first appeared in the paper.

My favourite Moran columns tend to be those that deal with popular culture where she takes a subject and then riffs on it in a deceptively effortless and hilarious fashion.  I’m also a big fan of her imagined late night conversations with her long-suffering husband, rock critic Peter Paphides (himself a highly talented journalist).

Indeed, if that was her limit, that would be sufficient but, in addition she is an excellent interviewer as shown in this collection in pieces about Keith Richards and a manically wonderful trip to a sex club with Lady Gaga.  These pieces are almost worth the price of the book on their own.

And there’s yet more.  Over the years, Ms Moran has become more confident and vocal about speaking out on social issues, often linking them back to her own childhood in the West Midlands.  In this book, there are serious pieces on benefits cuts, the closure of libraries and the nature of poverty.  I can’t say that I always agree with her views but they are expressed here clearly, cogently and persuasively.

I believe that good humorous writing comes across as apparently effortless but needs huge skill from the author and I’d hold Ms Moran’s serious pieces up as evidence of her talent.  As well as the columns I’ve mentioned above, her obituaries of Elizabeth Taylor and Amy Winehouse are poignant and deeply moving and demonstrate real quality.

Although I’m not entirely sure that Caitlin Moran would approve of me, I’m a huge fan as you may have guessed by now.  In summary, she’s funny, bright and a deceptively serious social critic and I can do no better than to urge you to go out and buy this book (or borrow it from the library!).  You really won’t regret it.
Posted by Falaise at 4:18 PM

I haven't read this one yet, but I'm super excited about her forthcoming book, How To Build a Girl, that I just got in the mail today. Looking forward now to both books.

Start following our signals NOW & make up to 270% per day.