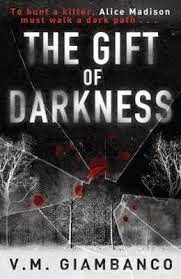 If ever I receive a free copy of a book (whether solicited or unsolicited), I’m pretty scrupulous about disclosing the fact in my review of it but I don’t necessarily make a point of disclosing right at the beginning of the post.  I do feel, however, that with The Gift of Darkness, V.M. Giambanco’s debut thriller, I should be very open about the fact that Mrs Falaise knows the author, that the author and I have been known to communicate on Twitter and that my copy of the book was given to me by her.

Given this, I was actually half-hoping that there would be some flaw in it that would enable me to hand down some righteous constructive criticism and, thereafter, point to it to demonstrate my simon-pure character.  Unfortunately Ms Giambanco has signally failed to oblige and has delivered an excellent police procedural which promises to be the first of many.

Detective Alice Madison has only been on the Seattle Police Department Homicide squad for five weeks when she and her partner, Sergeant Brown, are called to a crime scene.  It’s not pleasant.  Inside, an entire family has been murdered, the father being forced to watch his wife and two young children being shot.  Each of them has been blindfolded and a cross drawn on their foreheads in blood.  The words, “Thirteen Days”, have been scrawled on the wall of the bedroom, also in blood.

The father, James Sinclair, is also a survivor of the Hoh River kidnapping 25 years earlier, in which he and two other boys had been kidnapped.  Only two of them survived – Sinclair and John Cameron, a man now wanted for numerous murders.  There are sufficient clues at the scene to make it a seemingly open and shut case but Madison and Brown soon begin to have doubts.
It does need to be acknowledged that The Gift of Darkness is a doorstopper of a book, clocking in at a touch over 500 pages and around 143,000 words.  It is sufficiently heavy to have made it an uncomfortable read on the Tube but the length allows Ms Giambanco to fill in the back stories of the main characters and to set the plot up in detail.

Arguably, the first half or so of the book could have been pruned a little as Ms Giambanco gives highly detailed scene descriptions, probably due to her background in the film industry - but which could have left more to the reader’s imagination – and the nature of the police procedural sub-genre.  Having said that, I quite enjoy seeing a satisfying plot reveal itself little by little and it certainly allows for a steady increase in tempo as the story builds to its climax as well as a gradual ratcheting up of the tension.

Many of the tropes of the genre appear in The Gift of Darkness and it’s much to Ms Giambanco’s credit that she stops well short of falling into cliché territory – in fact at one point I groaned as she dangled a classic genre plot device that made me (a lifelong half-wit at guessing the identity of the killer) think both that I’d spotted the murderer very early on and that the book was about to become quite dull.  Foolish me, as it became apparent shortly after that my guess couldn’t possibly have been correct.  What the reader actually does get is some interesting twists on the tropes she uses and a story that flows naturally from whodunit into whydunit and keeps firm hold of the reader’s interest by some ingenious plot devices and hooks.

Aside from the plotting, Ms Giambanco’s main strength appears to be in characterisation.  The central protagonists all have rich back stories and are satisfyingly nuanced – there are no cardboard cut-outs or characteristics dressed as characters here – although I would say that Ms Giambanco is better at bad guys – they tend to the cold and creepy and John Cameron, in particular, is one of the more intriguing villains I’ve come across recently.

It’s also noteworthy that the large cast of detectives, crime scene technicians and prosecutors are also drawn so as to give them individuality and the promise of development into a real ensemble in the future.  Holding it all together is Madison, a gutsy and determined cop, and her relationship with her partner and mentor, Brown.

I don’t suppose The Gift of Darkness will convert non-crime fiction fans but it’s a highly accomplished debut that I thoroughly enjoyed and would unhesitatingly recommend (unless you’re a fan of “cozies” who struggles with anything darker.

Madison and Brown have all the hallmarks of series protagonists and there is a pretty elephantine unresolved issue at the end of The Gift of Darkness that practically screams for at least one sequel and probably more so I hope that Ms Giambanco’s publishers do the decent thing and sign her up for more – I for one will happily blow the cobwebs from my wallet and shell out for more of this.
Posted by Falaise at 4:36 PM

There are actually lots of particulars like that to take into consideration. That may be a nice point to convey up. I provide the ideas above as common inspiration but clearly there are questions like the one you convey up where an important thing will probably be working in trustworthy good faith.....Cccam Server