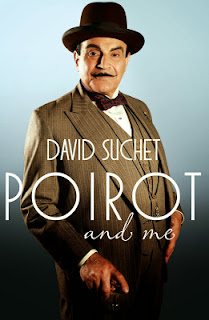 This may sound rather silly but I’ve still not been able to watch it.  It sat on my Sky+ box for weeks before being replaced by a DVD version just before Christmas and now rests on the DVD shelves awaiting the call but, for some reason, I’m just not ready for it.

I’m talking about Curtain, of course, the last ever episode of Agatha Christie’s Poirot, with David Suchet as everyone’s favourite Belgian.  It started nearly 25 years ago in January 1989 with The Adventure of the Clapham Cook and ran for 70 episodes, covering every Poirot novel and virtually all of the short stories.  It’s a great achievement as the main characters remained constant throughout the whole run and Suchet’s Poirot is, surely, now the definitive Poirot, standing head and shoulders above other cinematic Poirots, including those of Peter Ustinov and Albert Finney.

As well as this, it has been one of my personal favourite series, having started whilst I was at university and having been an on-and-off companion throughout my adulthood.  There is something peculiarly comforting about Suchet’s humane and affectionate portrait of Poirot and, even now, if I’ve had a tiresome day, I will slip an episode into the DVD player after Mrs F has fallen asleep and allow it to soothe me like a nice mug of hot chocolate.

Oddly enough, though, I had completely missed just how loved the series was by the general public and had, for some strange reason, thought it was just another TV detective show that I happened to have developed a peculiar fondness for.  Not so.  Not by a country mile as, come last November, in the run-up to the final episode, there was a blizzard of media coverage of the event, David Suchet became a staple of the interviewer’s sofa and the man himself published Poirot and Me, a memoir of his time as the great detective.

It’s a very engaging read and Suchet comes across as a serious character actor who ended up identifying with Poirot maybe a little too much and becoming driven to complete the cycle and to portray the character in the way he felt would realise Christie’s vision of Poirot.    Incidentally, he also appears to be a genuinely nice man, with the merest touch of thespian vanity.

The book opens with Suchet’s account of how he came to get the role, including a meeting with Christie’s daughter the (now late) Rosalind Hicks in which she admonished him not to mess it up and the advice he received from his brother, the ITV newsreader John Suchet – don’t touch it with a bargepole!

Fortunately, David ignored this well-intentioned fraternal advice and prepared for the role by listing 93 character traits of Poirot that he needed to reflect, which is actually reproduced as an illustration in the book.

As well as containing reflections from Suchet on pretty much every episode he appeared in, Poirot and Me is stuffed with fascinating anecdotes, on and off the set.  We hear about disagreements between star and directors, changes in production team, his fellow actors and actresses and the struggles in achieving the full cycle.

Although obviously focussing on Poirot, the book is also an interesting account of the life of a character actor and it is immensely to Suchet’s credit that, despite becoming so closely identified with Poirot, he managed to maintain a flourishing career away from the series and has become one of Britain’s best character actors.

All in all, if you loved the series or have an interest in TV or the stage, I am sure you will enjoy Poirot and Me.  And frankly, it’s worth the purchase price just for the story of Suchet, the mango and the Royal……….
Posted by Falaise at 5:03 PM

I'm sorry to say that I haven't yet watched any of the series - more just because I don't watch much TV. It's available now via streaming, which gives me a chance to catch up. I have seen some of the newer Marples (the ones with Geraldine McEwan), which took some serious liberties with the stories, and with Miss Marple herself.

Personally, I've always preferred Poirot to Marple and you've got a treat in wait if you do decide to watch any!