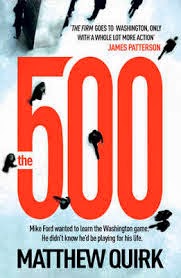 Mike Ford, the hero of The 500, journalist Mathew Quirk's debut novel, has a troubled family history - his father’s in jail for burglary and his mother’s dead.  But Mike has drive, ambition and brains so he’s managed to work his way through Harvard Law School and he’s landed an extraordinary job in a strategic consulting firm in Washington DC.  It pays well, his every need is catered for and all he has to do is to keep churning out the 90 hour weeks.

There’s only a couple of slight snags - his two bosses, immediate supervisor William Marcus and founder of the firm, Henry Davies, are a little mysterious, a bit cloak and dagger and some of the things the firm gets up to seem just a little close to the edge.  And as Mike begins to stick his nose into things he has been expressly warned off, it soon begins clear that the Davies Group is not just sailing close to the wind, it is involved in some very nasty and very illegal activities.

Now, at this point, I would be amazed if any thriller readers over the age of about 30 amongst you are not screaming “It’s just like The Firm”.  And, indeed you’d be correct.  For much of The 500, the plotting similarities between this and John Grisham’s genre classic are so apparent that they come very close to spoiling the book - especially as one of the blurbs (by James Patterson, no less) on the front cover expressly refers to Grisham’s book.

Personally, I think this is a slightly risky strategy, given the success, both critical and financial, of The Firm.  It invites comparison and sets a tough benchmark for The 500, which it doesn’t quite meet.

It’s a gripping read, nicely paced and with plenty of action.  I whipped through it in pretty short order and it held my attention until the last page.  Mike comes from a criminal background and is, himself, a reformed thief.  Quirk uses this background well, giving convincing descriptions of the craft and skills of the burglar and con-man.  There’s also an authentic feel to the scenes in which Davies Group staff use their leverage to influence politicians and other influential Washingtonians and, although I’ve only visited DC once, The 500 has a strong sense of place.

On the downside, Quirk ends up relying too much on Mike’s history and criminal skills to get him out of trouble, which becomes slightly repetitive at times; it’s almost as if he’s got all this knowledge and really wants to share it which is all well and good, but, sometimes, less is more.

There is also a little too much coincidence and convenience in the plotting - at one point, Mike breaks into a storage unit he had previously broken into years earlier and finds that the owner is still using it to store the same burglary tools.  The revelation of key pieces of information is also a little heavy-handedly planned out, with characters knowing just the right kind and amount of information for that point in the narrative.

These flaws don’t make The 500 a bad book - it’s a well-written, enjoyable thriller and much better than the average genre novel.  What they do result in, however, is a thriller that doesn’t quite match up to The Firm, a classic of its type.  Which isn't a bad result at all.

I'd like to thank Headline for sending me a review copy of The 500........and apologise for the inordinate amount of time it's taken for me to get round to reading and reviewing it!
Posted by Falaise at 2:35 PM