Two things first opened my mind as a teenager to the possibility of becoming a lawyer: the incomparable Rumpole of the Bailey, John Mortimer’s Falstaffian defender of freedom, lost causes and the Timson clan and the Nuremberg war trials, which formed the subject of my History O-level project. 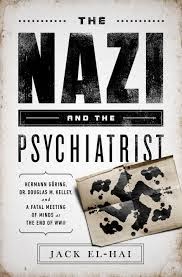 The Nuremberg trials, as well as being fascinating from a legal point of view, given the novelty of both the idea of such a trial and some of the charges with which the defendants were charged, were a crystallising moment in history, a period where the crimes of Hitler’s Germany were first brought to the attention of the world and were documented in forensic detail.  To those of us now accustomed to seeing archive footage of the concentration camps and other atrocities, it may be difficult to grasp the shock and impact of this but the showing of film of the camps at the trial formed one of its most dramatic events – a moment where some of the chief architects of Nazi Germany were confronted with their most obscene ‘achievements’.

Douglas Kelley was a US Army psychiatrist assigned the task of maintaining the mental health of the defendants before and during the trial.  A driven achiever with a complex family background, he also assigned himself the task of analysing the defendants to try and determine whether the leading Nazis were mentally abnormal, implying that the Nazi regime was a unique historical phenomenon, or whether they were, in fact, normal, raising the chilling conclusion that, given the correct conditions, regimes similar to Nazi Germany could arise almost anywhere.

Jack El-Hai’s The Nazi and the Psychiatrist deals admirably with this argument, whilst also containing a biography of Kelley who, in an eerie echo, was to commit suicide by cyanide, the same method as his chief patient at Nuremberg, Hermann Goering, had used to cheat the gallows.
Given that Kelley’s personal background and life was so full and complex, and that his tenure at Nuremberg and interactions with the Nazis could itself have filled a book, it should come as no surprise that The Nazi and the Psychiatrist is, whilst an excellent read, slightly unsatisfying, falling somewhere between a number of stools, being part-biography, part reportage and part analysis.

Everyone who reads The Nazi and the Psychiatrist will find something of interest, whether in Kelley’s life, his relationships with Goering and Hess or the conclusions he draws.  I was less interested in Kelley’s personal life than in an objective account of his work at Nuremberg.  In particular, having read both his account of his time there and the account written by his colleague and rival, Gustave Gilbert, I was most interested in the account of their rivalry and the different conclusions they reached about the defendants.  Gilbert viewed the chief Nazis as psychotic and abnormal, giving a comforting message to America that Nazi Germany was unique.  Kelley concluded the opposite and spent much time lecturing and speaking on how similar things could happen in America and elsewhere.  El-Hai’s synopsis of the controversy and its development over the years is excellent. 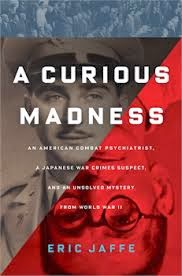 By contrast, A Curious Madness, sticks more closely to the personal.  Its author, Eric Jaffe, is the grandson of US Army neuropsychiatrist, Daniel Jaffe.  After having served in Germany during the final months of WWII, Jaffe was posted to Tokyo, where he was asked to determine whether Okawa Shumei, a leading Japanese nationalist thinker, was mentally fit to stand trial at the Tokyo war crimes trial, the ‘other Nuremberg’ about which we in the UK at any rate, know far less.  Although initially indicted, Shumei’s behaviour in custody had been erratic and, when, during the first days of the trial, he slapped former Prime Minister Tojo on the head, the President of the Court ordered a psychiatric evaluation.

Jaffe determined that Okawa was unfit to stand trial and he was transferred to hospital, where he completed a Japanese translation of the Koran and made a seemingly miraculous recovery.  Re-examined by two psychiatrists who came to different views on his mental state, there has always been a school of thought that believes Okawa was feigning madness and fooled Jaffe.

The starting point of the book is Jaffe’s attempt both to find out more about his grandfather and finally to answer the question of whether his grandfather’s assessment had been correct.  A Curious Madness develops into the interwoven biographies of both Daniel Jaffe and Okawa Shumei and touches on many broader and fascinating subjects such as the early days of psychiatric engagement by the US military and its theories on the treatment of combat fatigue and the development of Japanese conservative nationalist thought in the period up to WWII.  Jaffe’s focus is clearly on his grandfather which enables him to maintain the balance of A Curious Madness towards the biographical.

If I’m perfectly honest, I preferred The Nazi and Psychiatrist to A Curious Madness (although both are well worth reading).  In part this is because I am so much more familiar with the Nuremberg trials and the personalities of the former – I may have enjoyed the latter more had I read more on the Tokyo war crimes trial first.  I was also less interested in the personal biographies of the psychiatrists and more interested in their work and conclusions – readers with more of a biographical bent may have a different view.  Consequently, although I believe Eric Jaffe does a better job of focusing his story, I found El-Hai’s book more to my taste.

For those interested in World War Two or the development of criminal psychiatry, these books are well worth reading and thoroughly recommended.  For the more general reader, they may be a little specialised and off-beat, although they are still good reads and should also appeal to the general lover of biographies.

I would like to thank Scribner and Perseus Book Group for allowing me to read A Curious Madness and The Nazi and the Psychiatrist respectively via NetGalley.
Posted by Falaise at 9:47 AM