2,333: The Rules of Acting by Michael Simkins 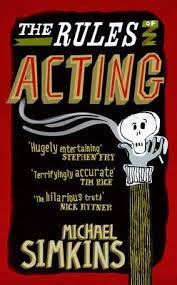 Michael Simkins is one of those actors whose face you’d recognise but whose name may well elude you.  Since leaving RADA in the late 1970s (he was a contemporary of the wonderful Timothy Spall), he has had a varied theatre, film and TV career, appearing in the likes of Mamma Mia!, Chicago, Richard III, Yes Prime Minister, Foyle’s War, East Enders, A Touch of Cloth, V for Vendetta and The Iron Lady.  In addition, he writes regularly for a number of newspapers and has carved out a little niche in gently humorous, often self-deprecating, books.

The latest of these, The Rules of Acting, is ostensibly a guide to aspiring actors, designed to help them through the various stages of a jobbing actor’s life, from drama school onwards.  Drawing on his own experiences, he dispenses advice on all aspects of the thespian life, such as learning lines, firing an agent, attending the Oscars and, most importantly, why failing to read a script to the end can result in horrendous consequences, like having to simulate sex with a pig.

In reality, it is much more of a ramble through his own career and much the better for it.  Although dispensing some sound advice, it is all tempered with a wealth of anecdotes, some of which are wry and others belly-laugh-inducing.  As an actor who has worked with almost everyone who is anyone in showbusiness (from Meryl Streep to Kelly Osbourne!), there are plenty of tales to tell.

Of course, Simkins is an outlier in the theatrical profession in having built a successful and prolific career.  As he points out, acting is a profession with an unemployment rate at any given time of some 92%.  Indeed, Simkins himself has had to supplement his acting work with presenting safety training workshops for sewage workers and working as a crate smasher in a car factory.  His first piece of advice for aspiring actors is actually to find another career and towards the end of the book, there is a salutary account of Simkins’ search for the members of his class at RADA.  Other than the aforementioned Spall and Sinkins himself, virtually none of his other contemporaries had managed an acting career of any note and most were out of the industry altogether.

Reading The Rules of Acting feels like spending an evening in the pub with SImkins whilst he regales one with theatrical tales.  It’s great fun as well as being understatedly instructive for aspiring actors and I’d heartily recommend it to anyone with an interest in showbusiness.  If your interests tend more towards sport, Simkins’ account of his obsession with cricket, Fatty Batter, is also simply wonderful and I would recommend this too.

I’d like to thank Random House’s Ebury Publishing for allowing me to read The Rules of Acting via Netgalley.
Posted by Falaise at 12:04 PM

His other career as writing books seems to be going pretty well!

Alex - Yes, he seems to be one of those annoying people who does everything well!