2,229: Storyteller: The Life of Roald Dahl by Donald Sturrock 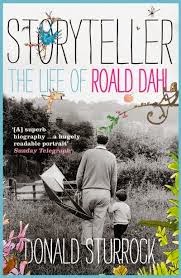 If you read any of my series of posts on my favourite childhood books, you will appreciate how important Roald Dahl’s stories were to me as a child.  I’m also delighted that mini-Falaise appears to be equally as taken with books like Charlie and the Chocolate Factory, James and the Giant Peach and Fantastic Mr Fox.  Her absolute favourite, though, is Matilda.  Book, film and musical versions have all been a massive hit with her, although I was surprised that I had never come across it as a boy.

There is actually an easy and obvious answer to this, of course.  It was first published in 1988, when I was at university and it would probably have been a little odd had I been rushing to Blackwells to pick up a copy (and given the minor disagreement I was having with them at the time over the size of my unpaid account, they probably wouldn’t have sold me a copy anyway!).  In my own childishly self-centred way, I had always seen Dahl as being a figure of my own youth, a writer who must, surely, have stopped writing at about the time I stopped reading him!

So, when I came across Donald Sturrock’s biography of Dahl, Storyteller, I was curious to learn more about the author who has given two generations of my family so much pleasure.
It’s a bit of a cliché (or truism?) to note that those whose lives make the best biographies tend to be the more complex characters and that the most complex characters aren’t always the most likeable and so it proved with Dahl.

Sturrock was a friend of Dahl (and, given the difference in ages between the two, a bit of an acolyte as well) and was appointed to write this biography by Ophelia, one of Dahl’s daughters.  Consequently, with this being as near to an authorised biography as one can get of a dead man, one has to suspect that Sturrock is likely to be sympathetic to his subject.  If so, Dahl really must have been a prize shit at times.

Even without his mass of conflicting virtues and vices, Dahl’s life would have been fascinating.  A Norwegian immigrant, his father died when Dahl was just seven.  After an unhappy schooling at Repton and a short spell working for Shell in Africa, he became an RAF pilot in World War II.  Having crashed on his first operational flight and having suffered a serious back injury, he was posted to Washington as a member of a British intelligence unit.  There he began his writing career and also enjoyed the US capital’s social scene.

One of the revelations of Storyteller was how, after initial success, Dahl tried and failed to become an adult novelist, ending up writing dark (and sometimes distasteful) short stories for American magazines.  Indeed, it wasn’t until the end of the ‘50s that he turned his hand properly to children’s fiction (and even then supplemented it with partially successful script-writing for Hollywood).
One of the key motifs of Dahl’s life was his habit of falling out with people, especially agents, editors and publishers.  He seems to have been hideously egocentric and ungrateful to people such as Sheila St Laurence, his American agent and the person who persuaded him to try children’s fiction.  Sturrock reports how, when he ended his relationship with Random House, staff in their New York office stood on their desks cheering with relief.  When added to the fact that many of the key literary figures in his life contributed much, much more to the detail of his books than he ever gave them credit for, it adds up to a not-very-pretty picture.

He actively portrayed himself as a secluded writing genius, sitting in the shed at the end of his garden in Buckinghamshire to produce his books, something that was far from the truth.  This self-mythologising was also evident in his “creative” retelling of his childhood and RAF experiences in Boy and Going Solo.  In particular, Sturrock doesn’t shy away from examining Dahl’s near-fictionalisation of his wartime plane crash (although does theorise on the medical consequences in a way that probably gives Dahl more credit that he was due).

As well as a rich and turbulent professional life, Dahl’s personal life was also packed with incident and tragedy.  His son, Theo, was left brain damaged after a road accident in New York at the age of four.  Worse still, his eldest daughter, Olivia, died of encephalitis when she was just seven and his first wife, the actress Patricia Neal suffered a major stroke at the age of 39 that had doctors writing her off as a vegetable.

And this is where the more heroic side of Dahl comes in.  Frustrated by the inadequacy of the shunt that was needed to drain fluid from Theo’s brain, Dahl drove the development of a more efficient device that is said to have saved the lives of several thousand children (including the child of one of his editors).  After Neal’s stroke, Dahl pushed her to an almost miraculous recovery, following which she was able to resume her career (and outlive him by 13 years).

But, just when one begins to admire him again, Sturrock suggests that Dahl was actually quite relishing the sense of no longer being in his Hollywood star wife’s shadow and the sense of control he had over her.  And, in the end, while she was still in a vulnerable state, he was to leave her for his second wife, Felicity Crosland, with whom he had been having a decade-long affair.  Here Sturrock, in my view, tends to gloss over the devastation that the affair must have caused Neal and Dahl’s children, with most of whom he had a difficult relationship.  In fact, Tessa ended up burning her school down to get his attention.

On the whole, Sturrock does a good job of treading a line between offending the Dahl family that had given him the mandate to write Storyteller and whitewashing the dark and unpleasant side of Dahl’s character.  Even more impressively, he manages to fit in some decent analysis of Dahl’s writing and its influences in between telling the story of Dahl’s life.

Something I hadn’t realised at all was the level of hostile criticism that was directed at Dahl’s children’s fiction.  In truth, he was transformative in giving a voice to the dark and wild impulses that lie within children and of writing stories that would appeal to them rather than stories written from an adult’s perspective extolling appropriate behaviours and morals.  All sorts of critics and organisations (including the American Library Association) lined up to criticise this approach which, despite Dahl’s irascibility and argumentative nature often being his own worst enemy, seem ludicrous today.  Sturrock faithfully chronicles this fascinating argument, including a particularly poisonous comment from Ursula LeGuin.

Generous, loving (at least to Felicity), argumentative, possibly anti-Semitic, womanising and thoroughly difficult, I found it hard to warm to Dahl the man but remain in love with his books and unable to deny the profound changes he wrought in children’s literature which have transformed the genre for the better.

Sturrock ends this excellent biography by noting how strange it is that Dahl only won one major award for children’s literature in his lifetime and by quoting a comment that Dahl made shortly before his death:

“Sometimes it gives me a funny feeling that my writing arm is about six thousand miles long and that the hand that holds the pencil is reaching all the way across the world to faraway houses and classrooms where children live and go to school.  That’s a thrill all right.”

I read this book awhile ago and I was shocked by all of the things that he had accomplished in his life. It was quite a varied life!

I love his writing and it seems such a fascinating person! Thanks for the review, I'll go and check out this book a little more.

Wesley - he certainly crammed a lot in!

Guiltless Reader - I think he was incredibly complex and difficult to feel sympathetic towards.

Stay 온라인 카지노 nearby and help the new new} dealer get comfortable dealing. Gambling with friends and family often a|could be a} delicate situation. You want everybody to have an excellent time and never lose their shirts. Text is out there underneath the Creative Commons Attribution-ShareAlike License; extra terms may apply.