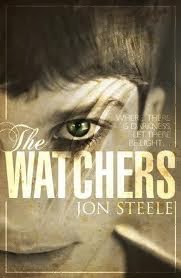 In trying to organise my thoughts on The Watcher for this post, I did a cursory scan of a few other reviews and was fascinated by the number of authors, genres and books that have been referenced.  Dan Brown, The Hunchback of Notre Dame, detective noir, Jason Bourne, Neil Gaiman, magic realism, Paradise Lost, John Connolly, the list goes on.  And, paradoxically, whilst the genre-bending nature of the book makes it fresh and interesting, the sheer volume of Jon Steele’s ideas end up weakening the narrative.

There’s a quote from Terry Pratchett’s Wyrd Sisters that strikes as quite apt here:

“Particles of raw inspiration sleet through the universe all the time. Every once in a while one of them hits a receptive mind, which then invents DNA or the flute sonata form or a way of making light bulbs wear out in half the time. But most of them miss. Most people go through their lives without being hit by even one.
Some people are even more unfortunate. They get them all.”

It’s a phenomenon I’ve noticed in a number of debut novels - the author has a whole bunch of brilliant ideas and really wants to share them, leading either to a messy narrative or, as in the final third of The Watchers, a seeming rush to get everything in and wrapped up.

The first two-thirds (or there or thereabouts - I don’t count pages) is fantastic.  Steele expertly weaves together three narratives, each focusing on one of our trio of protagonists - Jay Harper, an amnesiac detective straight out of Chandler (see, even I’m doing the reference thing now), Marc Rochat, the physically and mentally damaged guet (or watcher) of the cathedral of Lausanne, and Katherine Taylor, a high end escort, seeking sanctuary from the US tax authorities in Switzerland.

Steele slowly, almost languorously, begins to reveal the plot, dropping in subtle clues and pieces of information as he goes along, drawing the reader in.  Although the initial pace is leisurely, it is a real page turner.  We discover that Rochat believes that his life’s purpose is to rescue an angel in distress and that he has identified Taylor, somewhat improbably, as that angel.

For her part, Taylor, who is thoroughly enjoying a life of luxury as an escort to members of the exclusive Two Hundred Club of rich and powerful men, is about to find out that her gilded life comes at a price.  Harper, who finds himself working for the IOC as a security consultant with no memory of his previous life, is investigating a possible new and dangerous drug which gradually leads him to cross paths with both Taylor and Rochat as the plot begins to become clear.

I don’t want to say too much about the plot here as much of the joy of the book lies in experiencing the plot unfold.  So let’s leave it that the plot has some supernatural and biblical elements to it.  As these supernatural themes and plot elements become more apparent though, the book begins to lose some of its subtlety and ambiguity and becomes a more straightforward and more action-based narrative, which makes it less gripping.

At the same time, Steele throws in a whole load of ideas and details which, to be fair, he couldn’t really have done before but which don’t get the treatment they probably merit.  This gives the climax a slightly rushed and skimpy feel and doesn’t live up to the quality of the first part of the book.

Overall, I’d recommend The Watchers.  Steele’s writing is rich and subtle and the characterisation has real substance (with the exception, oddly, of Katherine Taylor, who is a bit wooden).  There are some excellent ideas in the book and his prologue, set in the trenches of World War One, is a truly fine piece of writing.  It's the first in a trilogy, of which the second is definitely on my TBR.

I was sent a copy of The Watchers for review by Transworld, for which I am very grateful.
Posted by Falaise at 3:02 PM

Faults aside, this sounds worth reading. I agree too that so many first-time novelists cram too much into their first books - no wonder second novels are so 'difficult' - all the ideas used up on No 1.

Faults aside, this sounds worth reading. I agree too that so many first-time novelists cram too much into their first books - no wonder second novels are so 'difficult' - all the ideas used up on No 1.

Did you know that you can create short links with AdFly and receive cash for every click on your shortened links.